Maritime Cup up for grabs

The wrestling scene in the Maritimes is looking to break out of its rut and bring quality action back to the region with the launch of East Coast Pro Wrestling (ECPW) on May 4 in Kentville, N.S. with the second annual Maritime Cup.

The first Maritime Cup was held in late 2003 and put on by Maritime wrestling institution NewScott.com and was won by TNA’s Bobby Roode after he defeated Mike Hughes in the finals. This year, Roode will be on the card but will not be participating in the tournament. 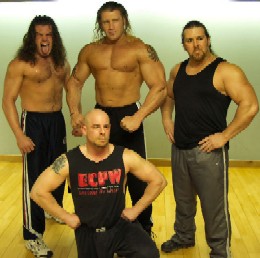 The crew at ECPW has also lined up a special celebrity guest in Sarah Dunsworth of Trailer Park Boys fame to stand in the corner of Trash Canyon. Not to be outdone, Kingman will have Marisa standing at his side, who is undefeated in Atlantic fitness competition.

This year’s edition is slightly different in that it will feature only wrestlers from the Maritimes.

“We want wrestlers who are known to the fans, who can put on a really good show,” he said.

The talent for the Cup is looking like a who’s-who of Maritime wrestling with eight homegrown grapplers ready to give it 110 per cent for what will be the biggest show for many of them to date.

“It just seems well planned and prepared, we’re billing it as thew biggest show yet in the Maritimes,” tournament favourite Duke MacIsaac said.

“Everybody on that card is known throughout the Maritimes, everybody on the card has wrestled in the Maritimes,” Cup contender Trash Canyon said. “I think people realize that it’s all Maritime talent and they want to support their own.”

This being the second installment of the Maritime Cup, some are wondering how this one will compare to the first, which was a successful event.

“We have a big thing to live up to, I mean the first Maritime Cup you had Bobby Roode and Mike Hughes in the finals, you had up and comers like Scott Savage in the show, you had Gary Williams, it’s going to be pretty hard to beat,” Henstock said. “But at the same time, I’m confident we’ll be able to put on a better show than the very first Cup.”

That confidence is shared by Canyon, who thinks this event will surpass its predecessor.

“I think it’s going to be a lot better,” he said. “I think we’ve got the quality of production behind us that’s going to help out an awful lot, the lighting and sound systems, the big screen.

“The small town setting, what I think has happened is it’s created a buzz in the Annapolis Valley, it’s about an hour outside of Halifax so you have a tremendous amount of small communities within a very short distance of each other,” Canyon continued. “What I’ve noticed is through our advertising, is that word has spread very very quickly. So the buzz is in workplaces and stuff like that, I don’t think really happened in the first Maritime Cup.”

While serving as the launch for the return of Maritime wrestling, the event will also serve as the backdrop for a new TV reality pilot based on the lives of four of the competitors in the tournament.

Canyon, Kingman, Williams and MacIsaac will be the focal point of the series, which will give fans a look into the behind-the-scenes lives of four wrestlers without big money contracts, trying to make a living in the rough world of independent wrestling.

“I realized that a lot of fans were more interested in having a beer with me after the show than they were in watching me wrestle,” Kingman said.

“We’ve come up with the original idea,” Canyon said. “Then Duke MacIsaac and Gary Williams got involved, because we’re all pretty tight friends.

“Then we decided. Let’s go talk to some TV people and production people, so we just started along those lines talking to people throughout the industry and that’s how we got hooked up with the Trailer Park Boys.”

What better way to get the ball rolling on the TV show than by filming the premier episode at the premier event?

“Tournaments are always exciting because anybody can get a crack at the title,” Canyon said. “First kicking off the year. So it just seemed like a great way to kick off the entire season and the TV show.”

There has been a lot invested in this event, which the promotion has been organizing for months. The hope is that it will be the springboard they need to begin regular tours of the Maritimes.

“We are currently in the process of putting together a tour for the summertime,” Henstock added. “We’re basically looking to tour full-time during the summer.”

Jason Follett is on the brink of saying goodbye to education and hello to a life of being a desk jockey. And he still resides in Charlottetown, Prince Edward Island, where there is still no wrestling. He can be emailed at [email protected]