The entire TNA locker room, and indeed the whole wrestling world, was saddened to learn of the passing of Chris Candido on Thursday. Chris reportedly died from a blood clot due to complications from his surgery to repair the broken leg he suffered at the TNA Lockdown pay-per-view.

To those who knew him, Chris was a wonderful person, always with a ready smile and a quick wit. He exuded charm and zeal and was one of the few guys with the guts and determination to make it back from an addiction problem that could have lead to his demise if not for his inner strength. It is beyond unfortunate the he was taken from us just as he was coming back into the superstar status he so richly deserved and worked so hard to regain. 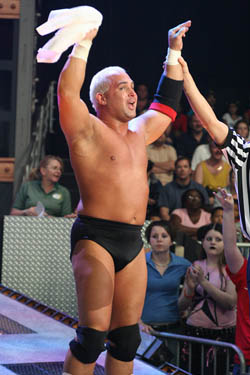 I first met Chris during his time with the WWE in 1997. He was part of the crew in Calgary for the In Your House Canadian Stampede PPV that July. I had been in the military and was just about to be released at the end of my contract. After the show I made my way backstage and the first person I ran into was Chris. Aside from a few chance encounters with other stars like Hulk Hogan and Roddy Piper and a lot of the Harts and Bulldogs, Chris was the first guy I talked to about getting into the wrestling business. To show what a class act he was, he listened to me gush — with patience and genuine interest — and was extremely helpful with advice and well wishes. It was shortly after talking with Chris that I met Bruce Hart and joined the Dungeon. Thanks to Chris, and bolstered by his words of encouragement, I was able to talk Bruce into letting me come train once out of the army. I owe him much.

I was able to speak with Chris’s current protégés, the Naturals, Chase Stevens and Andy Douglas, and get their thoughts on Chris’s passing. Both are distraught and wish they would have had more time with Chris as Chris was a joy to be around. They pointed out that as soon as Chris joined TNA, he was one of the boys. He was relaxed and fun, told great road stories, and did fantastic impersonations. Andy and Chase both particularly loved his Tracy Smothers and put it over as bang on. They both said that even though he didn’t go out to hang out after the shows, as it was well known about his past, he would go out to eat for a bit and still be one of the boys.

Unlike some of the talent that has come aboard from WWE and ECW, his was an easy fit in the locker room. Some of the valuable things they were able to learn from Chris in their short time together have already become apparent in their work — as is evident by their recent World Tag Team title win. Chris’ influence has been invaluable.

But more valuable than the title win for the Naturals was the praise that Chris gave them after their tag match with AMW. “Chris put our match over as bringing him back to being a fan of wrestling,” recalled both Naturals.

“I haven’t enjoyed a match from a fan’s point of view in a long time, and what you guys did tonight made me a fan again! You guys were fantastic and tore the house down. I am so proud of you,” Chris told them. Andy and Chase both said they got goose bumps from the strong words of praise.

Although he will be missed, both Naturals feel the same as Chris’s brother Johnny Candido. “He went out the way he wanted to … on top of the world, blonde, tan, and loving life up until the last minute. Every ounce of my brother loved this sport, and for him to go out 2 or 3 years ago wouldn’t have been a fitting end to the life of such a determined, passionate, and benevolent human being. I truly view my brother as an angel as will all who knew him. Thanks to everyone for all your positive press, Chris went out a happy man and will forever live on as the (one of) greatest of all time. He would have had it no other way.”

It is always unfortunate when someone of such talent and passion is taken from us prematurely. It’s the kind of travesty that makes you appreciate the time you’ve had with that person immensely. If I could have had one request before Chris was taken it would have been to be able to climb into the ring with a truly great performer and person.

Chris was a gentleman and all-around wonderful human being. I and many others are saddened by his passing and send our deepest condolences to his family at this worst of times.

Good bye Chris. We didn’t have you long enough, but it was enough to have you as long as we did. Bless you and see you one day at the shows in heaven.