This time, Kenny Jay is on top

Kenny Jay is proof you can win for losing.

Known throughout most of his career as cannon fodder for the likes of Verne Gagne, Red Bastien, and Mad Dog Vachon, Jay will be the first enhancement wrestler ever honored by the Cauliflower Alley Club when it holds its annual reunion in Las Vegas this week.

“It really feels great to be honored and to have so many wrestlers congratulating me. It’s something that I haven’t always had in professional wrestling,” Jay, real name Kenneth Benkowski, said from his Minnesota home. “I wasn’t on top, but to be acknowledged like this is a great feeling.” 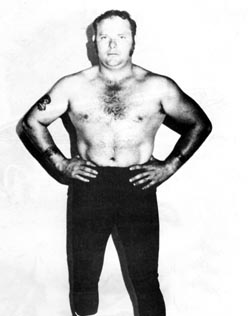 While his won-loss ledger runs heavily toward the loss side, admirers say Jay would not have lasted more than four decades in wrestling without a knack for bringing out the best in his adversaries, whether he was a good guy or bad guy.

Jay was born March 27, 1937 on a farm in the rural community of Holdingford, Minn. His high school did not have a wrestling program, and Jay, growing up without the benefit of a television in the family, did not know what professional wrestling was about.

Upon moving to Milwaukee after graduation, he saw a small ad touting a school run by Bob Hawkins. He was immediately hooked. “It must have been in my blood, so I joined up with that and just kept going.”

He had his first match in 1958, though a two-year stint in the U.S. Army took him out of the mat game. After that, he joined Verne Gagne’s Midwest-based American Wrestling Association as the guy who got his brains beat in every week on TV by some of the biggest names in the sport – Gagne, Billy Robinson, Crusher Lisowski, and Dick the Bruiser.

“When I was young and single in Chicago, it was a lot of fun being a heel. You could work the people more, and the more they booed you, the more fun it was,” Jay said.

When he hooked up with the AWA, though, he switched to a babyface role because of a landscaping business he had opened in Minneapolis. Simply put, he feared prospective customers would not want a beefy, obnoxious heel tending to their lawn and garden needs. So, fan favorite Kenny “Sodbuster” Jay was born.

“It was kind of hard to be out there and be hated and doing landscaping. I talked to [AWA owner] Verne Gagne and I switched. It was great because I could work with bad guys and good guys.”

For two decades, Jay was a favorite TV opponent of top stars because of his skill in the ring and his willingness to let others have the spotlight. “I’d go on TV and I’d hear Mad Dog say, ‘Gimme Kenny Jay.’ And I thought, ‘Uh, oh,'” Jay laughed. “I took them all on. Every time a new guy came into town, they’d give them to me.”

Because Jay had a side business, he was not concerned about his perception as a “jobber.” To rise in the ranks, he probably would have had to make his mark in other territories. Jay said he talked with AWA promoter Wally Karbo about working as a rising star in another region, but he decided he was happier in Minnesota.

“Wally was even going to send me to Oklahoma, and I probably could have got on top for a while. But I thought about it and thought about it, and finally said, ‘Aw, I don’t want to leave.’ I really didn’t want to go out for six months and leave my family. So I just stuck around here and did things they wanted me to do.”

Jay said he always enjoyed wrestling Bastien when the high-flying redhead was a star in the American Wrestling Association in the 1960s and 1970s. “Weekends, we’d leave Saturday and go to Denver, then Milwaukee and Green Bay. So I got around. That was a good payoff from that.”

The highlight of Jay’s career came not against a fellow wrestler, but against a boxer. In 1976, Jay squared off against heavyweight champion Muhammad Ali in a boxer versus wrestler contest. The match, held in Chicago, was a warm-up — in other words, hype — for Ali’s more publicized bout with Antonio Inoki later that year.

Jay confessed that he was excited, but frightened, at the prospect of meeting Ali. The match came with virtually no warning — Jay was hustled on to an airplane in the morning, and the combatants did not rehearse or plan the match. “It was all in one day, so it wasn’t something that I had to worry about for a week or a month. I think that made it a little easier.”

Plus, familiar faces surrounded Jay in the squared circle — Gagne was the referee, and Dick the Bruiser was in Jay’s corner.

But, he recalled with a chuckle, Bruiser’s assistance was of no use.

“All he kept saying was, ‘Poke him in the eye! Poke him in the eye!'” Jay said. “You can’t poke Ali in the eye. I got beat, but it helped me in my career because people would say, ‘Man, you took on Ali! Holy mackerel!’ So it was a feather in my hat.”

Jay occasionally dons the tights in tag team matches, but now, his biggest battle is against a silent enemy that most fans don’t recognize. Jay raises money to support research into finding a cure for histiocytosis, a rare blood disease caused by an excess of white blood cells. The disease can attack virtually any part of the body, including the skin, bones, lung, and the central nervous system.

He started his crusade against the disease when a grandson, now 12, contracted it. While the disease appears to be in remission, Jay’s efforts have continued unabated.

Earlier this month, Gagne, Bastien, Stan Kowalski, Dick “Dr. X” Beyer and several other grapplers joined him at wrestling events in Northfield and Bloomington that generated about $20,000 for histiocytosis research.

“The guys really, really helped me. They are just great about it. That’s the kind of thing that makes wrestling special,” Jay said.