Gary Williams born to be a ‘Wildman’ 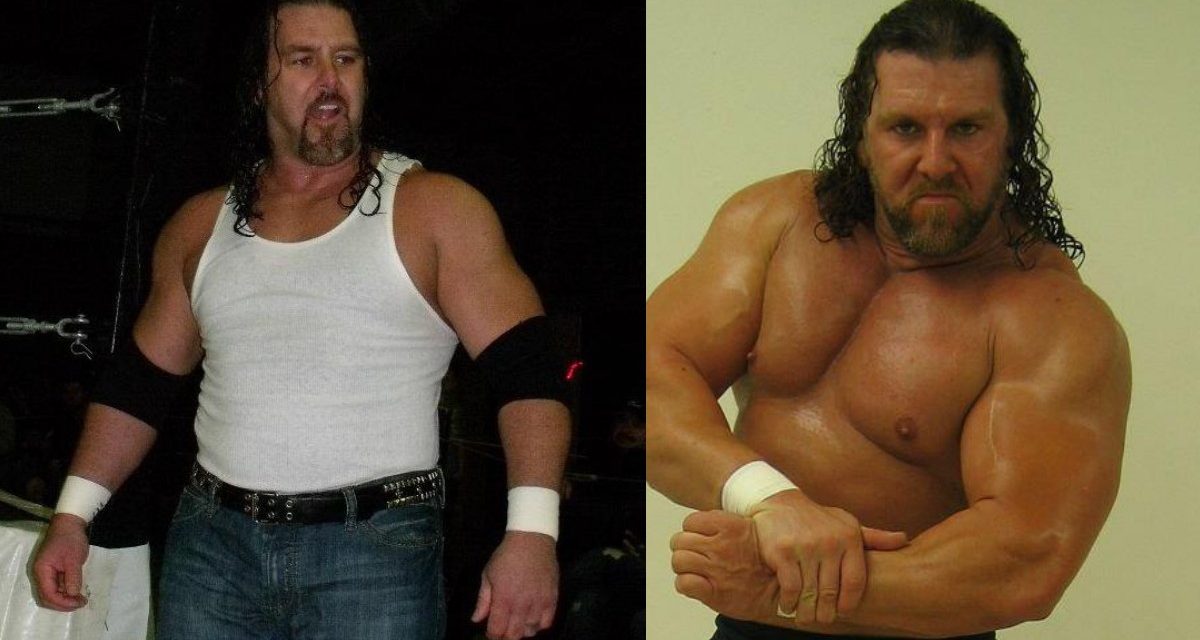 He’s wrestled all across Canada with the exception of Newfoundland. He’s worked for both WCW and WWE. He’s “Wildman” Gary Williams and, at 32, he’s already a well-respected veteran of the squared circle.

While growing up in Moncton, New Brunswick, Williams was a huge wrestling fan. After watching local referee Frank Parker and wrestler Todd “The Bodd” Douglas on television one morning, Williams decided to make his childhood dream of becoming a wrestler come true. He contacted Parker and Douglas and set out on the long road to wrestling stardom at the tender age of 24. 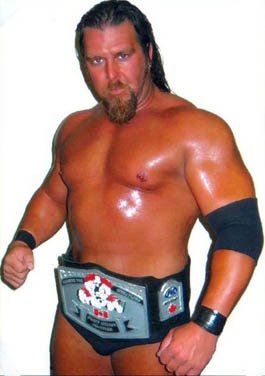 Douglas taught Williams the basics in a small gym without a wrestling ring or crash mats. However, Williams credits Hubert Gallant, a former Stampede Wrestling headliner, with molding him into the performer he is today. He started training with Gallant in March 1997, quickly bulking up to 230 pounds. After three months of training with Gallant, Williams wrestled his first professional match in Truro, Nova Scotia for Emile Dupre’s Grand Prix Wrestling promotion. He wrestled every night for the rest of the summer, learning the ins and outs from some of the best in the business, such as Rick Martel, Bad News Allen, Don Callis, Edge, and Christian.

“I didn’t really know better at the time, but I look back on it now and, for a guy like myself, you couldn’t ask for better surroundings,” said Williams. “It was great. I was very fortunate to break into the business with all that talent surrounding me.”

Legendary wrestler and trainer Leo Burke was in attendance during a 1997 Grand Prix show in Cocagne, New Brunswick to scout east coast talent. Burke was so impressed by the young Williams that he asked him to come to Calgary to train in the legendary Hart Dungeon with Bret Hart. It was there that Williams polished his ring psychology and mat wrestling skills by squaring off against the “Hitman.”

During the next few years, Williams wrestled for Tony Condello’s IWA promotion in Manitoba, Alberta’s Stampede Wrestling, and the Can-Am Wrestling Federation in the Prairies under several different monikers, including “Bad Boy” Gary Gallant, Wildman Williams, and “Bad Boy” Gary Williams. He split his time between wrestling in the Maritimes and out west, plying his trade against a veritable who’s who of the Canadian wrestling scene. Then, in March 1999, Williams got his first big break: Leo Burke got him booked for a couple of WCW tryout matches, a Nitro taping in Toronto and a Saturday Night taping in Kitchener.

“I knew Leo Burke had the power to call up the office and say, ‘come check out this guy.’ Knowing that, and after what had happened with Bret in Montreal, the whole WCW thing started looking good,” said Williams. “The whole experience was amazing. The way they set up the show was that we didn’t wrestle directly in the show, but an hour before the show started when people were starting to come in, that’s when they had Jimmy Hart, J.J. Dillon, and the guys who sat and watched the matches.”

Fittingly, Williams wrestled his original trainer, Todd Douglas, both times and impressed the WCW brass in the process. Unfortunately, WCW overlooked Williams for a year before offering him another tryout in March 2000, this time in Winnipeg. Again, Williams wowed WCW management and, again, he was overlooked. At that time, he decided to try his luck with WCW’s chief rival, the World Wrestling Federation.

“After I noticed that nothing was really happening with World Championship Wrestling, I figured I was going to do it myself, so I got in touch with Kevin Kelly and talked to him and I called him religiously every Wednesday. Eventually, after five weeks, he said alright,” said Williams.

Williams received a tryout match against Billy Gunn during a Jakked taping in Calgary. At first, the Wildman didn’t know what to expect, so he went to his old friend from his Grand Prix days, Edge.

“I was actually kind of intimidated at first, because I went in there and had no idea what to expect,” said Williams. “I went in there and I was talking to Tony Garea and he says, ‘you want to work with Billy Gunn?’ and I said absolutely. I’d heard some things about Billy Gunn, so I went to Adam [Edge] and talked to him. He said Billy will be good with you and it really rang true. It was great.”

Although Williams felt management was pleased with his performance, he cites bad timing as the reason why he never received a call from Stamford.

“When I did that match with WWE, the last thing they were looking for was more talent. Right around that time was when they had announced that they bought WCW. I think the last thing on their minds was adding people to their roster,” said Williams. “Kevin Kelly was happy with the performance in the match, but nothing came out of it.”

Williams claims his WWE experience, although disappointing, made him a stronger person.

“It’s kind of a weird feeling. When I was walking down that ramp in front of 20,000-plus at the [Calgary] Saddledome and millions watching around the world and then, the week after, back in a dingy old bar, it was a huge hit emotionally,” said Williams. “Looking back, how can you be on top of the world one week and then, the next week, back in your normal life? It’s a huge adjustment. That’s why some people in the wrestling business can’t get away after they get a taste of what it’s like and just can’t go back to a normal lifestyle.”

After bouncing around the Canadian independent scene for the last few years, Williams decided it was a good time to pass along his knowledge of the wrestling business to a new generation of up-and-comers. Scheduled to open its doors this spring, the Wildman Academy (www.school.maritimewrestling.com) in Halifax aims to teach would-be stars the ropes.

“I think a lot of wrestlers think about it and it’s a matter of who’s going to do it and who’s not going to do it. I’d often thought about running a school, but I never really got around to it,” said Williams. “When I moved down here to the Maritimes, I thought this was the perfect opportunity to try this out and see how it works. It was a thought in my mind for the last few years.”

Still, admits Williams, there’s a steep learning curve in the transition from grappler to teacher.

“Other than wrestling independently, where basically you work for yourself, it is the first time I’ve ever stepped into something where I’m doing it myself. It’s a lot of work to get everything organized,” said Williams.

If anyone can successfully run a wrestling school, said Massive Damage (Sean Dunster), it’s Gary Williams. The Wildman would often run mini training camps at Dunster’s own school in Edmonton, impressing Dunster with his no-nonsense approach to training. Since getting to know Williams while training together in Calgary with Burke, Dunster has nothing but praise for his friend.

“I first really met Gary at Bret Hart’s house where we both trained with Leo Burke. I had met Gary on an IWA show briefly, before this just a handshake. Gary and I immediately hit it off,” said Dunster. “By working with Gary and learning the business together, we developed a very strong friendship from day one. We have often referred to ourselves as ‘two brothers from different mothers, brother!'”

Likewise, Williams fondly recalls his bouts against Massive Damage, matches that he calls the toughest of his career. “A lot of them were strictly hardcore. With me and Massive, there’s always going to be something that’s going to happen, crazy stuff that I wouldn’t even think about doing with anybody else,” said Williams.

Another opponent, Steve Rivers, recalls his first impression of Williams from their days in Can-Am Wrestling.

“When I first met Gary he came to Calgary from out east and began working for Can-Am,” Rivers said. “My first impression was really good because he actually looked like a wrestler, unlike half the crew I was working with at the time. There were only a few of us that actually made an effort to go to the gym and actually looked like we belonged in a ring. He looked good and was a decent wrestler and he fit right in with the crew right away.”

“Kowboy” Mike Hughes credits Williams for keeping him in the business. “When I broke in with Grand Prix, I was paired with an old timer named Bobby Bass. Bass wouldn’t give me anything in the match. Emile Dupre, the promoter, was going to send me home and that probably would have been it for me in the wrestling business,” said Hughes. “Gary had heard about me about to be sent home and pleaded with Emile to let him have a match with me. Emile agreed and Gary made me look like a million bucks. Because of this the others had confidence to work with me.”

To this day, Hughes remains extremely grateful for what Williams did. “I’ve worked in virtually every major promotion in the world over the last six years and been to every corner of the world and that would not have been possible if Gary didn’t do what he did and I will be eternally grateful for that,” said Hughes.

Kingman (Peter Smith) also owes Williams a debt of gratitude for helping him break into the world of wrestling. “I first met Gary in the gym in 1997. I knew he was working for Emile and I wanted in. I approached him and we chatted. He gave me Emile’s contact info and I started the following year. We have been friends ever since,” said Smith. “I’ve been in 17 different countries that I might never had seen had I never met Gary.”

Looking back, Williams has no regrets on a career that has seen him wrestle from coast to coast. Now at a point in his career where many of his peers reflect on their accomplishments, Williams looks forward to what the future has in store.

“I’m focusing a lot on running the school right now. I’ll see what happens and what comes up,” said Williams. “As far as trying with WWE, I’ll probably give it another shot, but right now, I’m going to focus on the school. Wrestling has changed who I am. If I had never got into wrestling, I don’t know what I’d be doing. I’d probably be working a regular job somewhere. Wrestling has made me more of a businessperson, more aware of what it’s all about.”