February has always been an important month in the life of Vid Vain — his birthday is on the 5th; it’s the month he first stepped into the squared circle three years ago; and this year, he will embark on a new endeavor, the debut of his own promotion: Victoria City Wrestling. 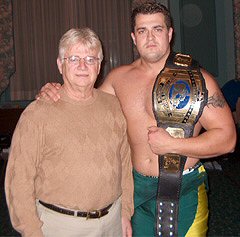 Vain describes the event as “a family show,” featuring talent from promotions such as TRW (Top Ranked Wrestling out of Abbotsford, BC) and ECCW (Extreme Canadian Championship Wrestling), companies which Vain currently wrestles for.

“What I am trying to do for Victoria is I want to cut out the politics,” promised the current NWA Canadian Heavyweight champion told SLAM! Wrestling from Victoria, B.C. “Whoever wants to come over can come over here and work. No one is going to be blackballed or have any problems.”

Not bad for a once self-described “short, fat kid” from Bishop Falls, Newfoundland, whose wrestling aspirations are rooted from finding solace and inspiration in Hulk Hogan’s mission statements of “training, prayers and vitamins” in the early ’80s.

“It hit me hard, I bought it hook, line and sinker,” confessed Vain, who admits that his chocolate Labrador is even named Hogan, as a means of sincere homage. “Every year it would be upgrades on my weights. My dad would buy me new benches and new this and new that. I started working out when I was 12 and now I’m 34.”

For the record, Vain (born Trevor Davis) now stands at 6’2″ and weighs in at an impressive 265 pounds.

His training began in the ECCW school outside Vancouver. He had just ended a 12-year run in the military, a venture that had him leave the Maritimes and relocate to Victoria, and was working as a full-time prison guard — which he still does today. He considered the training as a birthday gift to himself, but he admits he never thought it would go anywhere.

His first match was in Abbotsford against the Canadian Butcher. It lasted all of 15 seconds. “I was supposed to come in and take out the big bully,” recalled Vain. “And I really did because I think he had some kind of heart attack or heart aneurysm or something. He jumped me from behind. I backed up in the corner. We were just punching each other for real because we are bigger guys, bigger guys usually kind of just lay into each other. I went to throw him into the one corner. And he hit the canvas and just bolted. He went out the door, right to emergency.”

Unscathed from his first match, Vain went on to work in numerous promotions including Cutting Edge Wrestling in Newfoundland, Irish Whip Wrestling in Ireland and, of course, TRW.

In 2004, he had five bookings with a little organization called World Wrestling Entertainment, the first of which he garnered as a result of being boisterous. “I just came back from Newfoundland, I was doing some shows and I had bragged in the newspaper back there that the WWE was coming to Vancouver the day after I get back from my trip so I was going to show up and just walk in there,” he said with a laugh.

After a slight case of nerves, Vain showed up and made good on his word. He was actually asked to appear on WWE’s televised program, Sunday Night Heat. Though his appearance ended up being scratched, his foot was in the door. To date, he has had one televised match with the company and one of his bookings resulted in an encounter that Vain considers to be a high point in his career.

He was given a private one on one ring session with Canada’s own Chris Benoit. “We were in the dressing room and he just started talking to me and he found out that I was Canadian,” described Vain. “We were both getting changed and he went out to the ring first, I followed after. He was in the ring standing by himself. I was nervous all as hell. I was stretching and warming up. I was really nervous about getting in the ring. I could tell he was eyeballing me. He was just standing there with his arms on the ropes and staring at me. Finally I look over and he says, ‘Hey kid, what’s your name again?’ I told him and he says, ‘You wanna go messing around?’ I said, ‘Yeah!’ We were in the ring for about an hour together.

“It was just him and me and the whole arena.”

Afterwards, Vain had the opportunity to receive critical evaluation from the likes of Arn Anderson and Dean Malenko. “It was kind of a big day for me,” he said simply.

But for Vain, his achievements do little to overshadow his primary focus: the unveiling of Victoria City Wrestling.

He sees the promotion as a vessel for youth advocacy, already partnering with organizations like Rock Solid and Big Brothers and Big Sisters. The emphasis is on kids to attend the show. “I have had kids email me,” he explained. “What Vid says is, ‘If Trevor Davis from Bishop Falls, Newfoundland can get to the WWE, then anybody can.’ I’ve worked hard. Endless hours in the gym … I do a lot of good things here in Victoria. I’m pretty excited about my own promotion.”