CHARLOTTE, NC — Big lights, fireworks and rousing cheers are the dreams of Krissy Vaine. Vaine, a female independent wrestler out of North Carolina, has been working her life to make it to the WWE. She will not be satisfied with her career until that dream is reached.

Vaine took a step closer to that dream last Tuesday, December 7, when she was booked in a dark match prior to the Smackdown! taping in Greenville, S.C. Her match with fellow independent wrestler Jenny Taylor might have been her first view into the crystal ball. 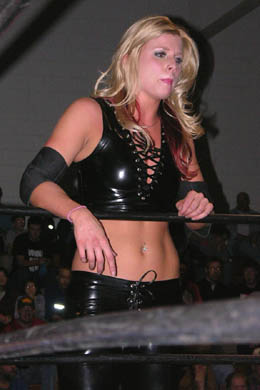 Krissy Vaine on December 4, 2004 at a show in Lenoir, N.C. Photo by Chris Schramm

“It was awesome,” Vaine said following the experience. “It was overwhelming and everyone went out of their way to be helpful.”

Vaine was also backstage the night before for RAW in Charlotte, N.C. There she was able to meet the head of the company. “Vince McMahon was so nice. He didn’t come off as intimidating. He was pleasant and very open to talking to me and wishing me luck.”

It’s hard to believe that Vaine has been wrestling for under two years. She started as a valet when she was only 19 under Ken Spence’s North Carolina promotion. She is always thankful to Spence for giving her that first break.

She always wanted to be a wrestler. Her parents held her back. They did not want to see her get hurt — emotionally or physically — when it did not work. They were trying to help her. After two years of valeting, she proved that she had her heart in it.

“Most of the other people training only came once or twice a week. I was coming five times a week. I really wanted to be a wrestler, and I showed it by spending more time in the ring than at home.”

She did most of her training at the CWF Mid-Atlantic training school out of Burlington, N.C. Vaine often got some surprise visitors to the school. Lita, Matt Hardy, Don Kernodle and Shane Helms had shown up on various occasions to give some pointers.

But she will always be a fan at heart, just as she started. When not training or wrestling, she enjoys the actions of John Cena, Trish Stratus and Randy Orton.

She has respect for Stratus because she feels they followed a similar route. Both started as models, both then went into valeting and lastly they both trained to wrestle in the ring. She was very excited to meet Stratus at RAW this past Monday. When Vaine told Stratus how she followed her career from the beginning, Stratus was very flattered and gave her some good tips to help her in her career.

“I was a fan since her fitness modeling days,” Vaine said of Stratus, “and when I heard she was training to a wrestler, I wanted to train too. She sort of broke that stereotype of how lady wrestlers looked like. She showed you can look like a beautiful lady and still be physical in the ring.”

One of Vaine’s favorite moments of her career was during a recent Elite Pro Wrestling Training Session (www.epwt.com). She was able to work three days with Ricky Steamboat, Les Thatcher and Tully Blanchard.

“Do you know who those guys are? It was just amazing who I was training with, and I walked out so much better because of it. I have talked to Thatcher and Steamboat since, and I can’t say thanks enough for what they showed and told me.”

In his Wrestler’s Eye View column from Nov. 27th on Pro Wrestling Insider, Thatcher raved about Vaine. “Krissy Vaine wrestled Venus in Spindale and both of these young ladies attended our camp as well. If I were giving a trophy for best technical indie match on the program it would have gone to these two hard workers. It was the best women?s match I had seen since last April in Vegas when Melissa The Cheerleader squared off with Ms. Natural. If you are a promoter looking for girl wrestlers please give Krissy and Venus a try. They are nice to look at and can work as well.”

She recommends the camp for anyone interested in wrestling. Even if you have been working 10 years, Vaine thinks you can learn a lot from the camp. She is even going back for a three-day camp in January.

If she thinks Steamboat was a big name to be in the ring with, she has an even bigger match coming at the end of January. She is scheduled for the Wrestle Reunion (www.wrestlereunion.com) show in an 6-woman tag team match. She is going to be in the ring with lady wrestling legends Sherri Martel and Wendy Richter.

“I actually worked Martel this past weekend,” Vaine said. “It was her first match in, like, seven years. She was so awesome about the experience. I was nervous about the January match, but Martel made me feel so good about the opportunity.”

Vaine takes a lot of pride in her web site. She has hundreds of pictures, movie clips, wallpaper, schedule and bio info. She tries to keep it updated a few times a week.

Vaine is still only 23, and has a bright future in front of her. She is training just as hard as she did when she started. She is training twice a week and wrestling twice a week. She is being booked all over, and her weekends are packed each week with long drives and loud crowds. Maybe that view inside the crystal ball this past Tuesday is a sign of things to come.