Next time you head to a sports collectibles store, don’t be surprised if you see a few WWE fans huddled around showcases.

Donruss/Playoff L.P. has issued the first football card of Brock Lesnar in their Playoff Honors set. The set, which debuted this month, includes Lesnar in its retail-stream release. Only 425 copies of the Lesnar rookie card are available, with an additional 100 parallel cards available. Packs of Playoff Honors carry an SRP of $6.00 USD. 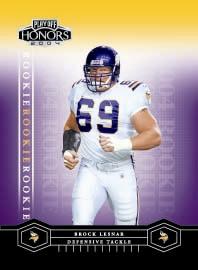 Lesnar, who is a former WWE Heavyweight Champion, left wrestling following Wrestlemania XX to pursue a career on the gridiron. He eventually landed a try-out with the NFL’s Minnesota Vikings, but was unable to garner a spot on either the main or practice squad. The potential remains, however, for Lesnar to make his way onto the squad, or to gain some experience in NFL Europe.

This potential spurred Donruss/Playoff to include Lesnar in their products this year. “With the comments (Viikngs Head Coach Mike) Tice made about Lesnar’s potential in the preseason, and the way he played when he got into scrimmages and games, we felt it was worth leaving him in both Playoff Honors and our upcoming Leaf Rookies & Stars subsets,” said Nick Matijevich, football brand manager for Donruss/Playoff. “Tice is also on the record that it is a good possibility that Lesnar will be added to the Vikings practice squad before the end of the year, and that there is a chance the team will ask to go to the NFLE next year to try and gain experience and work on his raw technique.”

Matijevich also points to Lesnar’s wrestling following as a reason for his inclusion in sets. “With his following from his days in the WWE and his tremendous physical presence, it made sense to us to go ahead and make rookie cards of him at this time,” he said.

Lesnar was a standout in WWE from his debut with the company just after Wrestlemania XVIII. Shortly after his debut, Lesnar, dubbed “The Next Big Thing” by WWE, would win the final King of the Ring tournament, and would garner his first WWE Heavyweight Championship title at Summerslam. He remained a top draw for WWE for the remainder of his tenure with the Fed.