MONTREAL – Saturday was the Championship Wrestling Association’s monthly card, appropriately named Pandemonium. Not only did the CWA have their best crowd in a while, there was a backstage announcement that they had reached a deal to associate themselves with the National Wrestling Alliance.

Not only did this announcement create excitement with the CWA’s staff and wrestlers, it’s a sure way to really showcase many of Quebec’s wrestlers on the international scene.

The evening started with the self-proclaimed tag team champions Velvet Jones and Superstar Shayne Hawke accompanied to the ring by Ace Jordan against the team of Jay and Alex Dynamite, also known as T.N.T. Shayne Hawke really worked the crowd into frenzy with his heel antics even before the match started and continued throughout the match. Suplexes were the order of the day as Hawke and Jones doubled team Jay Dynamite in a reverse neck drop for the win and retained their “Riverdale” tag team belts.

The next match had M.V.P. Michael Von Payton, Tank and Misty Haven, known as Misty’s misfits against Sweet Cherrie, Lufisto and Manuel Vegas. But when only Lufisto and Cherrie showed up in the ring, Lufisto took the microphone announcing that Manuel Vegas cancelled because of an unknown injury but because she considered the crowd as the third member of the team anyway, they would go on as planned. Although Misty’s misfits double teamed outrageously throughout the match, Cherrie and Lufisto were able to resist their constant attacks for some time…until Tank pulled a Tankster, which is similar to a pile driver, from the top rope on Lufisto that left the crowd in awe. After going for the pin, Lufisto had to be carried off the ring as she was visibly shaken up.

Although the previous act was a hard one to follow, it was time for the Twin Terrors, accompanied by Professor Adib Mansour against Drake and Damian Styles, Aftershock with Sweet Cherrie in their corner. With their experience, the Styles brothers were up for the challenge, as usual using every technical trick in the book, whether high flying or just power moves, but with the Professor doing numerous interfering from outside the ring, the Twin Terrors switched behind the referee’s back to take the win.

With numerous high flying moves, the next match had Mr. X-Treem with Misty Haven in his corner up against Jaguar. And even though these two wrestlers are quite technically accomplished, they just couldn’t provoke a crowd reaction, and that’s including many attacks by Misty on Jaguar behind the referee’s back, but once she kept the referee busy, M.V.P. came in to weaken Jaguar only to get out before being caught, so X-Treem took advantage and did a beautiful 4DVX, which is a modified Frog Splash for the win.

Then came one of the hot moments of the evening. Paranoid Jake Mathews comes out with his valet Lollipop to ask his eternal question: “Who will beat me?” therefore challenging anyone to fight him. The first one to accept was a weak Jaguar who had just been defeated and was quickly dispatched to the floor by Jake. That was followed by Dave Pronovost with Guil Reno at ringside, but only to find out how brutal Jake’s fury was, he was also disposed of in about three minutes. Nino Mancuso became the third wrestler to accept the challenge. The famed manager Joey Soprano was by his side, and even though Soprano pleaded with him not to fight Paranoid, Nino insisted to fight him, working the adrenaline for the battle. Joey Soprano then slapped Nino to get some sense back into him only to see Nino punch him out of the ring, to the delight of the crowd. Although this match lasted much longer than the others, Mathews, using his famed garden shovel, scored the win. Paranoid followed that by asking anyone else to come out and try to beat him, and that’s when a video of CWA’s heavyweight champion Dru Onyx came on thanking the crowd for the ovation he got after they were told that Dru Onyx had just won the NWA British Commonwealth heavyweight belt. Booker Big Show Pascal Leclair then brought out the belt to show Jake Mathews, to Onyx’s demand in the video, only to see Jake lose all composure and completely destroy the belt with his shovel.

Once everyone got their breath back, out came Alex Price and James Kraven, with Illusion in their corner to take on Justin Diamond and Davey Jackson. The match had one stipulation: the first team to make five top rope moves on the other team would win the match. This was a great set up for a high flying match that also included many table drops and numerous head drops on already broken tables; Alex Price did a beautiful forward 540 degrees flip from the top rope, but that wasn’t enough as Justin Diamond and Davey Jackson won in the end.

The next match had Sidi Mansour against Guil Reno, with the Professor Abid Mansou in his “brother’s corner. Even though Guil was up for the battle, he was no match for the constant interference by the Professor and eventually, Sidi Mansour took the pin.

The Professor then took the microphone and started taunting the crowd by insulting just about every fan and wrestler in the building as only he can and challenging any tag team to try and defeat him and his “brother Sidi Mansour”. That’s when booker Patrick Lono came out to introduce a new member for the CWA and under thunderous applause — Handsome J.F. comes out from the back in a very elegant suit. This is the same J.F. that had a match with Eric Mastrocola on WWE’s Sunday Night Heat just a few months ago and has been training with Jacques Rougeau’s wrestling school for many years. J.F. didn’t waste any time with hilarious and sarcastic one liner to insult the Professor and his family, and told the attendance that he would have a very special tag team partner for the next gala in November. That’s when the Twin Towers came out to attack J.F. from the back only to see Guil Reno and Dave Pronovost come out to the rescue and chase the Twin Towers and the Professor out of the ring. 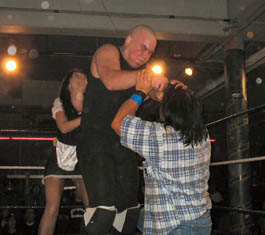 The long-awaited grand finale of the evening had the veteran Sunny War Cloud against Carl XL Leduc, who got some of his wrestling training at the famed Hart Dungeon in Calgary. The match was under street fight rules and even though it only lasted 10 minutes, the intensity was immense. The wrestlers used stop signs, step ladders, folding chairs and broken beer bottles and battled mainly right in the crowd who often had to get out of the way as the grapplers transported their battle just about everywhere. Carl XL won the match and tried to inflict more torture on Sunny only to see Sunny’s wife Karen come to his defence and plead with Leduc to leave Sunny alone. It was just about then that someone with a Freddie Kruger mask came into the ring and started pummelling Sunny to everyone’s surprise until he removed the mask only to reveal it was Manuel Vegas, who was supposedly injured, making a very surprising heel turn. He then took the microphone and went on to insult all the fans and Sunny.

All in all, it was another very good show by the CWA who keeps getting better with time. The quality of the videos and audio is great and the fan base keeps getting larger. And the future is particularly bright for the CWA as Steve Charette, producer of the CWA told SLAM! Wrestling that an agreement was done with the NWA-TNA and they were now their Quebec-based affiliate with a great potential for talent exchange along with international exposure and television spots.

This was started a while back when Dru Onyx, the CWA heavyweight champion, initiated contact with NWA international president Ernie Todd’s entourage to set up the beginning of negotiations with the happy conclusion. In the next few months, a few of CWA’s wrestlers will make an appearance in other NWA territories with also foreign wrestlers trying their luck in Montreal. The wrestling scene in Quebec only stands to benefit from such an association and the fans will only get even more spoiled with the incoming talent and the pleasure of seeing one of their own having success abroad as Dru Onyx is having these days.