You can never escape who you are, the exception being professional wrestling where participants are expected to assume personas that traverse normalcy and emanate a magnetism of ego and grandeur.

Nowhere else in the world can this eccentricity be scene with more color and passion that the luchadors of Mexico. It is there that man and mask exist in a magical, symbiotic relationship. 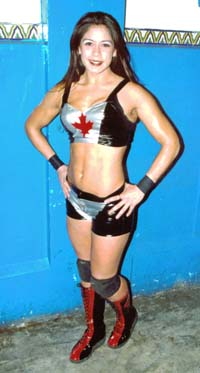 Winnipeg’s Sarah Stock may not have her mask anymore, but she still has the desire to wrestle. Photo by Corey David Lacroix

The last time SLAM! Wrestling met with Winnipeg grappler Sarah Stock, she was battling it out in the rings of Monterrey as the popular luchadora known as Dark Angel. But earlier this year, this Canadian angel lost her coveted wrestling alter ego, but in process, regained her true identity.

“I had a bloody, 45-minute match with Princesa Sugey and she ended up taking my mask at the end of it,” is how Stock summed it up in a recent interview with SLAM! Wrestling. Stock is currently at home in Winnipeg visiting with family. “It was a really tough battle.”

Tough would be an understatement to describe what Stock endured in that match that took place with the Lucha Libre Femenil (LLF) promotion. It was a far cry from the usual under-five-minute Monday night Diva match that mainstream fans are accustomed to watching. While the length of the no holds barred match was certainly an anomaly, more shocking was the site of an exhausted, sweat drenched Stock painted in her own blood.

“I really wanted to put up a good fight,” she said, explaining how the match garnered much attention from the Mexican wrestling media and proved her tenacity for the extraordinary amount of violence that was involved. “I wanted to show the Mexican people, after spending some time down there, that I’ve done my best to learn what I could about their style of wrestling and I wanted to earn their respect with a really hard fought match and I think I did.”

But the saga that unfolded that night in Monterrey could not have come to pass without the presence of Sugey, who Stock has looked upon as a mentor since arriving in Monterrey. “It was important for me to give Sugey a good fight. She’s such an incredible wrestler and I wanted her to feel that it was a good match and that I was a worthy opponent. I’ve learned so much from Sugey after having so many matches with her.”

With the removal of her mask closing out one chapter of her career, Stock now saw a new horizon to be reintroduced to the Mexican fans.

“After I lost my mask, I realized that there were a lot of opportunities for me without the mask, for people to see my face, to get to know me better and for me to show them a different side of my personality,” she remarked. “I think it was a positive thing for me to lose my mask; it was more emotional for me than what I thought it would be. As soon as I lost it (mask), reporters were coming up, asking me my real name and where I’m from. From then on, no one calls me Dark Angel, it’s Sarah to everyone.”

Her adventures in the wrestling landscape of Mexico have not been completely restricted to the wrestling ring, recanting an appearance she made on a local talk show called Curva Directa (Direct Curve), hosted by Monterrey personality La Pao. “That show is pretty hilarious,” explained Stock, describing how after getting thrown off the show on a previous episode, La Pao recruited Sugey for their next encounter.

“We did a follow-up show where Sugey came as La Pao’s bodyguard and I tried to get into the studio on the next show. Sugey gave it to me right there and La Pao gave me a couple slaps to the face and threw a midget on top of me. They did the three count and I was booted out of the building again. There were clowns running around all over the place, midgets and transvestites, all the while I’m trying to get my point across with my limited Spanish. It was crazy.”

It was in Monterrey that Stock built her career and fan following. But it was time for a change in scenery and with that, the decision was made to uproot from her home base. Her destination would turn out to be the lucha libre Mecca, Mexico City and to work with the AAA promotion.

“I wanted to go to Mexico City because I saw more opportunities there than where I was in Monterrey,” she explained. “The chance to work with AAA really pulled me over there. I had been in Monterrey for six months and I needed some change too. I talked to the office (AAA) and they agreed to help get me some work around Mexico City.”

The adjustment to her new work environment transcended the obvious change of living in a city of 20 million people. As it turns out, wrestling was not what AAA wanted Stock to do.

“I started working with them as a valet and I worked on their Triplemania show; it’s the Mexican Wrestlemania. I don’t know if you even call it being a valet, it was more like hosting. I didn’t actual go out there with another wrestler, I just went out there a held up the AAA sign and wave to the crowd.”

Although it was far from being an active member of the wrestling roster, Stock saw it as a way to get her foot in the door. “It was what I was looking for, in terms of that it got me into the company. Everybody there is very approachable, plus there’s lots of places to train in Mexico City.”

As it turns out, Mexico City is not the only place where she would take the opportunity to acquire new wrestling skills. It was during a recent WWE swing through Manitoba and Ontario that Stock had the opportunity to participate in some pre-show work outs.

“I remember at one point there were four road agents in the ring at the same. They were all talking at the same time to different people and it was so overwhelming trying to absorb everything they were saying. It made me realize how much I still have to learn. It was tiny things that I’ve never thought of that can make a huge difference in a match.”