On a Sting and a prayer

It’s hard to imagine a movie about wrestling great Sting conceived around a kitchen table, but that’s exactly how Sting: Moment of Truth came about.

George King, the movie’s director, is married to one of Sting’s agents. The Stinger-real name Steve Borden-was over at their house one day, sitting around the kitchen table.

“He started telling stories about being on the road, about the old days and what it took when you were getting $25 or $50 a night to really make it in that business. It was fascinating,” King told SLAM! Wrestling. “From that conversation, about a year later, we decided to do the movie. I wrote the screenplay. The guy that was supposed to direct got another job in between, so I ended up directing the movie.”

Sting had actually been flipping through various scripts that King’s production company, Dove Canyon Films, had in its possession. When King had the brainwave to do a movie version of Sting’s life, the wrestler brushed off the idea initially.

“At first, it was ‘Oh, no one is going to care about this,'” Sting said to SLAM! Wrestling. “He kept on me, and I thought, ‘Let’s try it.’ So he wrote this thing and it slowly but surely began to materialize into something that seemed like it was what God wanted me to do. It was and we did.”

The idea is that Sting life is dramatized into a 96-minute feature film that gives viewers a glimpse at the story of his life, both in and out of the ring, with a dramatic turning point where he accepts Jesus Christ as his savior.

Sting had a little input into the script. “It’s my life, but obviously, George took the creative liberty, license, or whatever you want to call it, and just added little things here and there. I had something to say about every part of it. With me, it wasn’t about the script so much as it was about the message that I’m trying to get across.”

Steve Borden started out as a weightlifter in California, as a part of Power Team U.S.A. His first promotion in Jerry Jarrett’s old Memphis promotion, where he teamed alongside fellow Power Team U.S.A. grad Jim Hellwig-who would later become The Ultimate Warrior-as the Blade Runners. From there, Sting went to the UWF then the NWA, which became WCW, rising into stardom with a stellar 45-minute draw against then-NWA World Champion Ric Flair at the first Clash of the Champions special on TBS.

Donnie Falcate plays the young Sting in the film. “Donnie, amazingly enough, he was a long-haired guitar player who came into the audition-he’s a 6’4″, 6’5″ weightlifter-but he’s in Nashville to make it in the country music business,” said King. “He came in, and I looked at him, and he the body. His read was really good. I said, ‘Listen, dude, would you cut that hair.?’ He said, ‘Sure, I’ll cut my hair to be in a movie.’ But I don’t think he understood that I was going to cut it to about an inch above his head in a flat-top and bleach it platinum blond. I think he was a little shocked. But we did that after he signed the contract.” 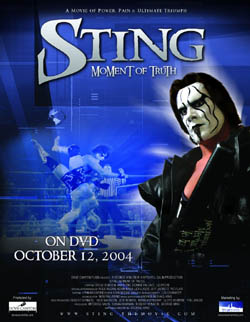 The film contains both vintage Sting footage (complete with WWE logo slapped onto WCW action), and new matches filmed before a TNA taping. The young Sting’s matches are wrestled by neophyte Falcate, which was appropriate, explained King. “The nice thing is we got the real Sting, Steve Borden, when he was there, he choreographed [Falcate]. Because it was his young career, it was real. He was teaching the moves, he taught the same way he was taught. So after a couple of weeks, he began to take the bumps, fly off the ropes. He was a real athletic kid. It really, really worked.”

The real Sting takes on Jeff Jarrett and an unnamed beast in two new matches. “We shot a match that nobody’s ever seen before-the Jeff Jarrett match no one had seen because that wasn’t on television. The match with The Monster is about a seven-minute match, or 10-minute match in the movie,” said King. “Sting got knocked out for only the second time in his career. He did this move where he flies around the guy’s back and the guy smashes into the canvas. But he banged his head, and man, I thought the movie was over. Lights went out. Just for 30 seconds, then he came back and he was fine. He didn’t have a concussion. It worried us. He said, ‘You know, that’s only happened to me one time in my whole career.'”

Both Sting and King see this as a movie that has appeal to both wrestling fans and the Christian market.

“[It’s] definitely for Christians,” Sting said, envisioning it as a teaching tool for youth pastors especially. “Wrestling fans, they’re going to see some wrestling footage in there. Hulk Hogan, Bill Goldberg, Hall & Nash, Lex Luger, Buff Bagwell, myself, Dallas Page, and I think there’s some others in there as well. I put on the tights and get some new footage. I did some wrestling for the movie. But you’re also going to see the man behind the mask, Steve Borden.”

“It’s got a far reach. The story of his career, the love story, the story of him and his wife, it’s got the other stories about what happened to him when he became addicted to prescription drugs and alcohol,” King said. “Then it’s him finding faith in God at the end of the movie that really turns everything around.

“We’ve got wrestling fans, the Christian market and NASCAR, because they all go hand-in-hand as far as the fan base. We will be going after the same market that Passion of Christ went to, as well as the hardcore wrestling people.”

Theatrical distribution was never really considered, said King. “We really made the movie to be a DVD. It was straight-up for home distribution. It got a few bites from people that we interested, or curious, would probably be the fair way to put it, about putting it on the big screen. But, you know, we never built it for that.”

Sting recognizes that it isn’t a Hollywood blockbuster that The Rock would appear in. As such, his life and career are simplified. “It’s hard to capture everything. If we wanted to make a full-blown feature film, you’ve got a five million dollar budget or something, then it wouldn’t have been glossed over so much, and we would have been able to hit more. It would have not just about the message, it would also have been more about the storyline.”

There is also no doubt that Sting is curious to see how his legions of fans will react to his move. “It is a Biblical thing. God’s ways, or my ways, or what I’m doing, the Bible literally says that it will be foolishness to the world out there. So I’m prepared for that,” he said. “I know that there will be persecution. There will be people that think that I’ve lost my head and I’m involved in this religious cult. Or that I just got weak and I had to turn to God. Whatever they want to turn it into, but I have no idea. I know that’s going to happen.

“But I also know that there are going to be some people that will want to know, ‘Wow, he knows this God, this Jesus Christ he talks about. He’s claiming through Jesus Christ and the power of Jesus Christ he was delivered from pain medication, from alcohol, from a lifestyle on the road that was pretty radical.'”

Regardless of the reaction, the man behind the paint, Steve Borden, is more content with his life than he has ever been. “Now I know what it’s truly like to be a husband, a father, an example to the public out there-wrestling fans included … There is an answer out there. We’ve heard about God our whole lives. I rejected God my whole life. I was one of those who thought, ‘What a joke man, I’m not going to go that route, I’m not going to live by a rulebook and go through all that. I’m not doing to do it.’ But I just got to a point that every part of my life was out of control. I knew that something supernatural had to happen in order to save my life, my marriage, my family, my career; to get me off of pain medication and alcohol and the whole deal. Because I never could have done it on my own.”