While most people in the Great White North spent last weekend spending time with friends and gorging on turkey, a select number of brave souls were getting a lesson in the basics of wrestling from a couple of lads from across the Atlantic.

NWA Ireland-based grapplers Fergal Devitt and Paul Tracey were on hand at the Montreal based Torture Chamber wrestling school to share with trainees the basics of British pro wrestling.

“We were brought in by Rodney (Dru Onyx) to coach some seminars,” explain Devitt to SLAM! Wrestling. An advance class was held on Saturday, followed by a basic session on Monday. “Basically, we just wanted to show the fundamentals of wrestling that aren’t really coached anywhere here in North America and show them that there are different ways of doing things.”

All three will be travelling to Winnipeg this coming week for the NWA 54th anniversary celebration, where wrestlers from various NWA promotions from across the continent and beyond will be in attendance to compete in the ring. “We’re really looking forward to that. We’re doing a tag team match should be quite fun for us because that’s what we do best back home,” said Tracey. 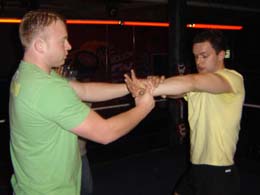 The Irish connection stems from Onyx having toured with both NWA Ireland and NWA Hammerlock UK in England. Now entering their fifth year as pros, both Devitt and Tracey are mainstays with both promotions as the self proclaimed Ireland’s greatest tag team.

As Onyx explained, the invitation was extended to both Ireland based grapplers to come to Canada, with the goal of educating local wrestlers of all levels of experience on the unique wrestling style of the British Isles. “It amazes me how much knowledge of wrestling they have. I thought it was so important to bring these guys down,” said Onyx. “The goal was to let wrestlers in Quebec know that there are different styles out there and to have the ability to accept other styles. You can’t graduate from high school just taking English courses. You need to take Math, Science, Gym and that will give you the all around knowledge you need to graduate.”

So what exactly is this style of pro wrestling?

“The influence is more based on chain wrestling, working holds and psychology versus spot wrestling and big moves,” explained Devitt.

It is a style that entombs the very building blocks of professional wrestling taught to Hewitt and Tracey by British wrestling legend Andre “Sledgehammer” Baker. A 20-plus-year veteran of the mat game who holds eight different martial art belts, Baker is responsible for establishing NWA Hammerlock UK and has become a foundation for producing and inspiring the next generation of grapplers in United Kingdom.

“Andre, to us, has been absolutely brilliant,” said Tracey. “He’s acquired influences from all over the world and he’s help us to get to a lot of places where we’ve been. He takes good care of us back in the UK.”

“Tough, but fair,” Devitt added in describing his tutelage under Baker, explaining how the Hammerlock promotion is used to help students launch their in ring careers. “In the UK, you usually do about two or three long tours with some individual shows sporadically held throughout the year,” said Devitt.

No doubt some will look upon the brand of wrestling brought by Devitt and Tracey as literally foreign, even outdated compared to what most fans in North America are accustomed to seeing.

On one front is the WWE juggernaut indoctrinating the masses to their soap opera, sports entertainment product where quality wrestling takes a backseat to long-winded promos and backstage vignettes. When the roster actually hits the ring, the action is quick and to the point, plagued by run-ins that sabotage any chance of an actual intelligent story being told in the match.

“The problem we have at home is what people see on television (WWE). That’s what they expect to see on our shows and you can’t blame the fans. But rather than do the same thing that they see on TV, we try to give them an alternative,” said Tracey.

Away from the big-time spotlight is the independent landscape, drenched by the lucha libre title wave influence. For workers under the 200-pound mark, high-risk highspot spectacles have become the norm while actual grappling is but a routine footnote, devoid of meaning.

In Devitt’s opinion, it all comes down to having the proper training or lack there of. “A lot of the junior heavyweights that aren’t trained properly tend to go miles overboard and take ridiculous risks trying to put themselves over. If you’ve been trained at one of the NWA schools, you know the fundamentals so you don’t have to take those risks and you can actually wrestle properly,” Devitt said.

As Tracey observed, the trend to spot wrestling has taken root with some promotions in his part of the world. “In various organizations over there it’s all based on spots,” Tracey told, adding how the NWA promotion aspires to deliver wrestling that will not overwhelm their fans. “At home, the main audience we work with are quite young. If we start flying around doing spots like that, it will just fly right over these kids’ heads.”

There are a select few grapplers that fans here in North America can look upon as prime examples of what the British wrestling establishment can produce. William Regal is perhaps the most recognized English talent, followed by independent standouts Doug “The Anarchist” Williams and Nigel McGuiness, both having established solid reputations as par excellent grapplers via the Ring of Honor promotion.

As for their impressions of the trainees in Montreal, both Devitt and Tracey were positive. “It went very well. I was quite surprised, compared to earlier experiences, with some of the technical abilities. They’re good bunch of lads down there and did very well for themselves.”

“They’re an excellent bunch,” added Tracey. “I think there are some people down there that will do very well for themselves because they picked things up quickly.”

Both grapplers had the chance to wrestle over the weekend at a charity show in Montreal. With this being their first time in Canada, both made it clear how much they’ve enjoyed their time here thus far and are looking to return in the near future. “We’re having an absolutely great time here. We’re hoping to come back in early 2005 and hopefully we’ll be able to do a few more shows.”

As for Onyx, he had nothing but praise for his guests and what they contributed to the students. “It was amazing. I couldn’t ask for more or better. These guys are true, consummate professionals. They brought the European, no nonsense, hard hitting style” said Onyx. “You can tell that they’re from the same school of William Regal and Dynamite Kid; that blue collar strong wrestling. I don’t think people realize how good English wrestlers really are.”