Due to scheduling conflicts and issues beyond their control, Edmonton’s Prairie Wrestling Alliance hasn’t had many shows this year. Thus, they needed a big show when they relaunched on October 9th. Taking eight of the best talent in Alberta and putting them in the ring for an hour, they pulled it off with a classic match capping off the best independent wrestling card in Alberta in 2004.

Dubbed “Night of Champions” the “Iron Man Match” featured the tag champion foursome of Damage Inc split into two teams: Duke Durrango & Greg Pawluk on one side and Dean Durrango and new member Randy Myers on the other. The Stampede Bulldogs and The Funky Bunch were determined to take the straps. What unfolded before a red-hot crowd at the Extreme Zone on the former army barracks was 60 minutes of wrestling that would have fans raving anywhere in the world. Blending scientific wrestling with comedy and high flying, the match was a clinic that kept the crowd into it the entire match, a difficult feat for any wrestler. 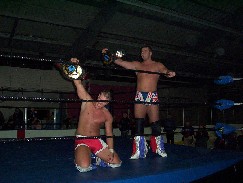 The fans were very vocal all night, chanting for moves and wrestlers to be tagged and in support for the Bulldogs TJ Wilson & Harry Smith and the Funky Bunch’s Marky Mark and Phoenix Taylor, chanting their names when they faced off against Damage Inc. However when Wilson and Mark squared off for the first time, the crowd was torn resulting in half chanting “Let’s go TJ” followed by the rest chanting, “Let’s go Marky.”

The first pinfall didn’t occur until 11 minutes into the match, when both Durrango’s were tagged in and Dean lay down for Duke to score the pinfall. Although Damage Inc would take an early lead; over the next fifty minutes all eight men would score a pinfall, tying the match up at two falls apiece. With the clock ticking down, Harry Smith blocked a frankenstiener by Phoenix Taylor and lifted him up into a powerbomb position, while Wilson sprung off the top rope with a blockbuster. Taylor’s partner Marky Mark unwittingly dove off the top to Damage Inc on the floor, allowing the Bulldogs to take the deciding fall. Everyone brawled in the closing thirty seconds, but it wasn’t enough, the crowd roared in appreciation not only for the Bulldog’s title win but also for the effort of all the participants.

The main event was the main draw of the show, but the undercard was rounded out with more solid wrestling and something for everyone. PWA Champion Chris Steele and challenger Tex Gaines took it to the floor, brawling throughout the crowd where Gaines took out three rows of chairs with Steele. The champion rebounded by dragging a hockey net into the crowd and scoring a goal with Gaines’ head. Steele powered the nearly 300 pound Gaines onto his shoulders and got the duke with a TKO.

PWA Cruiserweight Champion The Highlander was scheduled to defend against Ricky Rage, but the champion sustained an injury that resulted in him being stripped of the title. Rage locked up with high-flyer Pete Wilson for the vacant belt. Wilson struck hard and fast, taking to the air to dive to the floor onto Rage and connect in the ring with a flipping splash for a near fall. The high flying backfired when he attempted to take Rage off the top, and instead was planted on his head with a inverted suplex driver and pinned.

The show kicked off with popular PWA rookie Mr. Grizz facing local wrestler “Superstar” JD Michaels, who was making his PWA debut. The match was an excellent opener with Michaels was initially cheered, but when he started clapping his hands to get the crowd going, they chanted rhythmically “Grizz Grizz Grizz.” The two men traded holds and moves while the fans continued to stick behind Grizz. Michaels scaled the ropes like his WWE namesake and planted an elbow, but missed a superkick. Grizz leaped behind Michaels and hooked his feet under Michaels’ arms, rolling him up for the three count. As Grizz celebrated by hugging and shaking the hands of his fans, the grin on his face lit up the room. The expression of pure joy on a rookies face when they step into the ring and know they did a great job is what makes indy wrestling great.

Results for the Prarie Wrestling Alliance’s “Night of Champions.”

The next PWA show is November 6 at the Extreme Zone. Visit www.pwawrestling.ca for more details.