For years, those looking for a change from the big time North American style of wrestling have turned to tapes from across the Pacific. In Japan, wrestling is still treated with reverence and many of today’s stars have become better from working there. Whether a rabid follower of Japanese wrestling, or curious after viewing releases like the Chris Benoit DVD, you can’t go wrong checking out what Harley Race reportedly called the best wrestling card he had ever seen. 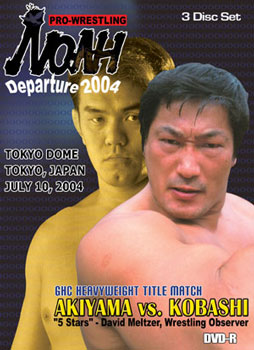 NOAH’s first show at the legendary Tokyo Dome on July 10, 2004 was headlined by GHC Champion Kenta Kobashi defending against Jun Akiyama. The match is deserving of the five-star ranking it is given, as the two men throw everything they have at each other in a brutal 40-minute war. By the time it reaches its climax the viewer feels almost as worn out as the combatants. That isn’t to say that the main event isn’t the only good match on the card, but it is worth the cost of the show itself. The first two matches are pretty bad, but things pick up with Michael Modest & Donovan Morgan vs. Kotaro Suzuki & Ricky Marvin and stay good from that point on. The last half of the card especially features five main event caliber matches, starting with the GHC Jr. Heavyweight Tag Team Title match between champions Naomichi Marufuji & KENTA and challengers Takashi Sugiura & Kendo Kashin and continuing with the second best match of the night for the GHC Jr. Heavyweight Title: Yoshinobu Kanemaru vs. Jushin “Thunder” Liger.

For those who know only of some Japanese wrestlers by name, the show also provides a great opportunity to see stars like Keiji Muto (The Great Muta), who teams with Taiyo Kea against two other Japanese greats, GHC Heavyweight Tag Team Champions Mitsuharu Misawa (Whose own battles with Kobashi are legendary) & Yoshinari Ogawa.

The commentary is in Japanese but the action speaks for itself. It might be best for newer fans to watch the five-show in segments to adjust to the difference.

If you are tired of the current wrestling landscape in North America and want to see something new, take a look at Japan and discover what many others have. There are alternatives, and damn good ones, and NOAH Departure is a great introduction.