FAYETTEVILLE, NC – Last February, promoter Greg Price went head-to-head with Super Bowl Sunday for his Mid-Atlantic Championship Wrestling reunion in Charlotte, the city of one of the participants in the big game.

So Price suspected he was in the clear last weekend for his first NWA Legends Fanfest in this western Carolina city. 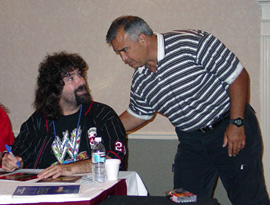 The storm that blew a whirlwind of devastation throughout the southern United States grounded many fans and even some wrestlers, most notably Dory Funk Jr. of Florida, who had hoped to attend the showcase of National Wrestling Alliance stars from the late 1980s and early 1990s.

“Who would have thought the weather would be a problem in the middle of August?” Price said. “But I think everybody had a good time.”

In fact, the 400 or so souls who braved the rains – and the hotels jammed with stranded travelers – were treated to a well-run show that featured the likes of Mick Foley (“Cactus Jack” to NWA fans), Ricky Steamboat, Ole Anderson, Tully Blanchard, The Rock ‘n’ Roll Express duo of Ricky Morton and Robert Gibson, Ivan and Nikita Koloff, and more than a dozen others.

“I feel sorry for Greg Price because of the weather. You can’t predict some things,” said J.J. Dillon, manager of the legendary Four Horsemen who now works for the sate of Delaware. “But it means a lot to me just to be here.”

Added former “Freebird” Jimmy Garvin, who offered up an assortment of DVDs, shirts, and barbecue sauce: “The response here is just unbelievable. I’m just so pleased so many people remember us so fondly.”

In fact, that fondness caused Ole Anderson, one of the most sinister villains to grace Mid-Atlantic rings, to do a double take when he was wildly applauded upon his introduction by NWA TV announcer Bob Caudle.

“I never in my life walked into the ring when people cheered me,” Anderson said in mock indignation. “All my career, all I heard was people yell, ‘Boo, you son of a … ‘ ”

With that, he egged on the crowd to deliver a chorus of boos, and, after he had been satisfactorily scorned, declared: “Good! I feel better.”

A highlight of the weekend festivities was the freewheeling question-and-answer sessions with Tully Blanchard, and Morton and Gibson.

Blanchard, who was joined by Baby Doll, his former valet, and Dillon, talked openly about his conversion from a wild life on the road to his present-day work as an ordained minister specializing in outreach to prisoners.

After he failed a drug test in 1989, Blanchard went from WWF world tag team champion to unemployment in 11 days. “That would be a shocker to you, but to me, I was absolutely blown away by it. How in the world can I be out of professional wrestling?”

After praying for help, Blanchard was reborn spiritually and has become well known in and out of wrestling for his calling. Even former NBA star Charles Barkley – “a tremendous Four Horsemen fan,” Blanchard noted – recently telephoned to congratulate him on “making it.”

While he pays relatively little attention to today’s wrestling, Blanchard said he was concerned that Ric Flair, his Four Horseman stable mate, could be sullying his legacy by wrestling well into his 50s, so far past his prime years.

“I feel sorry for Ric. He’s making the money and he’s still a household word. He should be held in tremendously high esteem for the ability and the things that he gave to this business and that may be tarnished to a great degree,” Blanchard cautioned.

Dillon, a former WWF and WCW executive, agreed, adding that Flair’s in-ring work “reflects on the state of the business. They don’t have somebody to replace him. That’s why they’ve got to send him out there.”

Morton and Gibson kept things moving during their two-hour interaction with fans. Bouncing around the stage, Morton described the development of the Rock ‘n’ Roll Express into one of the hottest babyface teams of the last 20 years.

Because of their diminutive stature, the pair had to work particularly hard to reach main event status in a time when larger wrestlers ruled the top of the card. As evidence, Morton recalled the first time he and Gibson squared off with Ole and Arn Anderson.

“I hit him [Ole] 700 times and he’s holding that top rope,” Morton said, pounding his hand into his fist for emphasis. “Needless to say, what he was trying to abuse me or use me. So I just stopped. I went right to the middle of the ring in front of 10,000 people and I just took a big ole’ bump on my back.

“Ole looked down at me and said, ‘Man, what are you doing?’ I said, ‘Man, you wouldn’t take a bump – I thought I would,'” Morton said to a hysterical audience. “But after that, I got respect from him.”

One dark cloud inside the fan festival, held at the Clarion Hotel, was the behavior of former NWA world champion Tommy Rich. Several fans complained Rich was overly sarcastic and boorish during an autograph session Saturday afternoon. At one point, he told a patron in a wheelchair to “hurry up,” according to several accounts.

About halfway through the three-hour session, Rich left the stage and went to his hotel room. He later spoke with Price, but did not return to the event and will not be on future guest lists, Price said.

“Sometimes you just have to deal with it and do the best you can,” Price said.

Additionally, Stan Lane, who wrestled frequently in Fayetteville as part of the Midnight Express, was a late arrival for an autograph appearance on Saturday. He collected part of his fee, signed a few autographs in the hotel lobby, and departed.

Price’s next show is scheduled for Nov. 26-28 in Charlotte, NC. Jack and Jerry Brisco, Paul Jones, and Harley Race are among the featured stars. Check out midatlanticlegends.com for more information.