Long Island-based indy wrestler, Little Jeanne is not afraid to take from the past and use in the future. She’s old school and proud of it.

Determined to bring back the glory days of women’s wrestling, Jeanne attended the Pro Wrestling Hall of Fame dinner on May 5, 2004. She used the opportunity to do some networking and to steal a move or two.

Some wrestlers will look at tapes from the past to gather the stuff that worked and use it themselves. Jeanne saw a video clip of Mae Young, who was sitting at her table, and was being inducted into the Hall of Fame. The clip showed Mae beating the crap out of her opponent like no women had done before, or for that matter, since. 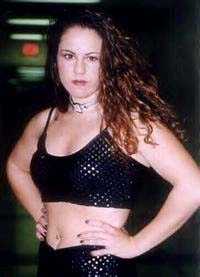 “It makes women’s wrestling today look wimpy,” Jeanne said, and has since incorporated some of the moves she saw.

One of her prized possessions is a video tape of six hours of wrestling from the 1950s-1970s. “I was so impressed with these women. They really brutalized each other. I feel like some of the female wrestlers today are kind of weak after seeing the way they threw those women around.

“My type of wrestling is the old school. I’ll hold onto a move and tell a story. I don’t believe in all this high flying, jujitsu, stacking five men up, doing a back flip. No, to me that’s not wrestling, it’s entertainment, but in my opinion that’s not what wrestling’s all about.”

The 5-foot-3 Jeanne has competed the world over and is most recognized from her WCW days when she competed with Mona (a young Nora Greenwald, now known as Molly Holly). “That’s who most of my matches were with,” said Jeanne. “I used to wrestle Saturday Night. Jimmy Hart was in charge of that show and was big into women’s wrestling. I would only work Nitro to put someone over before a PPV.” That didn’t get this female warrior down. She was competing in a major company during their golden years and that was a dream come true for any wrestler at the time.

“I really had a great time over there despite what a lot of people say,” she explained. “I made a lot of good friends. I had a good time with some of the bigger boys. You know, someone had to keep them in line, I had to put them in check a few times.”

Little Jeanne didn’t start in WCW though, as a matter of fact, getting into wrestling was a complete accident. “My friend was a big wrestling fan and we used to go to ECW shows together. I thought of meeting some of the wrestlers and they convinced me to go to Johnny Rodz Unpredictable School.” Johnny Rodz’ school, located in Brooklyn, NY, is a breeding ground for talent. Little Jeanne and current Smackdown! commentator Taz are some of the greats to come out of the school. She found it tough, being the only woman, but persevered. LadySports and the Professional Girl Wrestling Association named her their Rookie of the Year in 1999.

Gimmicks are a common thing in wrestling. They are used to get people over or sometimes to make things fresh. Jeanne was given many gimmicks throughout her career, not because of a lack of in-ring ability, but to make her even more appealing to the crowd and the younger fans.

“First, I was Sweet Destiny, the All-American girl next door, I guess you could say,” she explained. “When Little Jeanne debuted, she was thug. I was also Little Jeanne Mae of the Mae sisters. A spoof of The Beverly Hillbillies.”

With those gimmicks, she was able to expand to many different promotions. “I wrestled for WCW, UPW (Johnny Rodz), WLW (Harley Race), WXW (Wild Samoans), and tons I don’t remember.”

The Little Jeanne character came about when she was with WCW. “When I started working for WCW they needed a bad guy/heel. So that’s when Little Jeanne came out. Little Jeanne was that mafia chick, hardcore New Yorker. I wore the typical mafia hat with a pinstriped suit, top. I had a matching spandex style outfit underneath.”

In wrestling there is a saying, “It’s not the gimmick, its the wrestler.” For Little Jeanne no matter what she was given as a gimmick, she has run with it. During her tenure with each promotion she reached a level of respect from the fans. Little girls will come up to her, she said, looking for advice. Those girls see her as a role model for females in a male-dominated sport.

She has found allies in her fellow women wrestlers on the indy circuit. Some of her favorite opponents are Brandi Wine, Miss Natural and Lady Victoria. “We would have incredible matches because they love the business just as much as I do,” she said.

Her biggest wrestling exposure aside from WCW came while a part of the Dennis Rodman-headlined PPV (Rodman Down Under) and tour in Australia as Sweet Destiny in 1999. “On the tour I beat the hell out of Brandi Wine all the time. That was a very educational tour. I have done a lot of overseas tours before I’ve done Africa, Australia, Peru, England, I know I’m missing a country somewhere, I can’t quite remember which one it was. I do have a lot of fun doing the overseas stuff. Whenever I go overseas I try to explore the culture of the people over there. I am amazed at how receptive the fans are to wrestling all over the world.”

Besides wrestling, Jeanne is also a licensed motorcyclist. Yes, this brawlin’ chick holds her own in and out of the ring and looks bad–in a good way of course–on her cycle. She enjoys her bike and always seeks new adventures. For those of you who watched Spike TV’s Ten Things Every Guy Should Experience, Jeanne was one of those ladies involved in the amazing defeat of the two boys, not pinned once. Little Jeanne has also done stunt work for various movies and has appeared in a UPN 9 documentary on professional wrestling. She is also kept busy through dancing, combat, training, computer work and weight training.

One time when she was driving to a Jimmy Valiant-promoted show, they had one wrestler who had just gotten his license. Valiant was swerving in and out of traffic and so did all of the other wrestlers. The newbie driver hit a car, causing a nice sized pile-up with Jeanne being the last car to hit. “Nobody could hit me from behind. I had no one to sue, so I picked my bumper off the ground, put it in my backseat and left before the cops came.” She really had to get to that show.

On another occasion, she was having breakfast with a few other wrestlers, one being Ray Apollo (a.k.a. Doink The Clown in WWF). Ray heads out early, later Little Jeanne gets in her car and takes off. Now according to her own admission, “she drives with style.” Translation, she breaks the speed limit or at least did in this case. She’s cruising down the road, and she catches up with Apollo, who honks the horn on Jeanne. Jeanne keeps going and is then pulled over. Apollo then passes her stopped car honks and waves.

These days Little Jeanne is not slowing down. With rumors running rampant about Ted Turner running another promotion solely under his direction, people are speculating about who will join. I spoke with Jeanne on that. She was very enthusiastic and said that she would definitely love to join the promotion if the opportunity presented herself. Think of it this way, shes batting a thousand with going to Turner promotions and doing well. Good luck Jeanne, your talent will bring you to the promise land.