A Flair for Mississauga

‘The Nature Boy’ Ric Flair has been in and around Toronto doing media to promote his book, Ric Flair: To Be the Man, and did a signing Wednesday evening.

The Flair signing was at Wal-Mart in Mississauga.

SLAM! Wrestling’s Bob Kapur was there. “Overall, it was very well organized. Four hundred numbered wristbands were available which guaranteed an autograph — your wristband number determined your spot in line, so no pushing and shoving was necessary. You could even grab a wristband and leave, as long as you were back by 4:00pm to line up.” 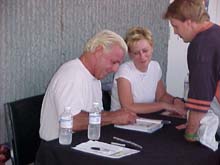 Flair was scheduled to be there from 6-8 pm, but arrived a little late, said SLAM! Wrestling reader Chris Kovachis.

“It was very very hot out there,” said Kovachis, who brought his wife and kids along to get more things signed. Flair signed his WCW World belt, his NWA World belt, a Ric Flair doll, and an old 1981 PWI magazine cover.” He would sign one item, as is customary, and most people brought either his book or DVD. But others brought some of the other stuff Wal-Mart had available, including a new Flair ‘legends’ action figure, and the new Raw magazine with him on the cover,” said Kapur.

Other Flair visits include an Off The Record taping to air on TSN on July 27th, and a visit with the Z103.5 morning show earlier today.