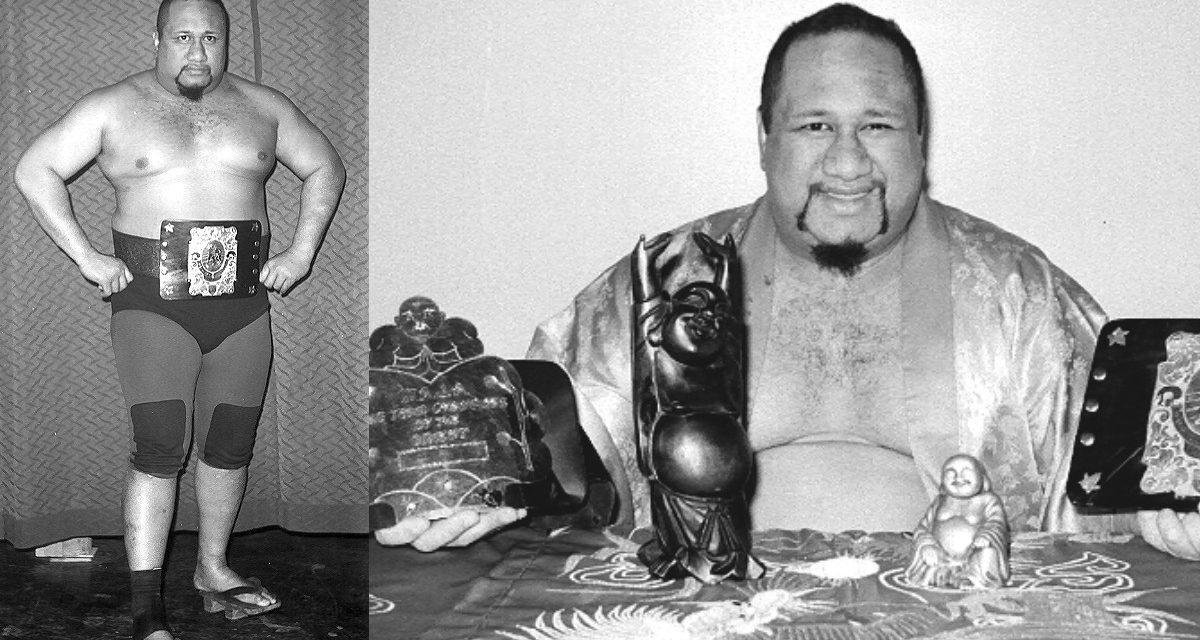 Yet the real Tor Kamata isn’t a meanie at all. Now living in Calgary, the 67-year-old Kamata is quiet and reflective on the phone, not one to brag or boast.

In fact, taking it to the next level, the former heel who bled buckets as his flesh bounced around the ring is retired, but dabbles in reflexology and shiatsu. 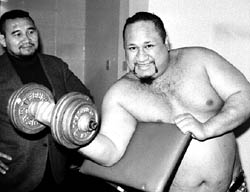 Sugi Sito looks on approvingly as Tor curls a dumbbell, and not a light one. Photo by Bob Leonard

Kamata was born in 1937 in Hawaii. He was into amateur wrestling in high school, and used to work as a bouncer at a Hawaiian night club that the wrestlers would frequent after their matches. So he was familiar with the pro side of the sport.

Then he joined the Air Force and got involved further in amateur wrestling. When he was stationed in Turkey in 1959, Kamata got an opportunity to train with some of the greatest amateur wrestlers in the world. “They have a wrestling school there, a college, and I had the privilege of going there and working with them.” he told SLAM! Wrestling.

Upon his return to Hawaii, the promoter there, Ed Francis, convinced him to turn pro. “He asked me if I wanted to get into pro wrestling. Well, of course, I jumped at the opportunity of getting in. But then Curtis Iaukea and Mark Lewin and Nick Bockwinkel, they’re the ones that helped me with my professional wrestling,” he said. “That’s how I became successful.”

Dubbed Tor Kamata, in reference to the Grand Inquisitor from the Spanish Inquisition Tomas De Torquemada, he worked 23 years in pro wrestling. “I did most of my wrestling in the south area, Kansas City, Oklahoma, Florida, Indianapolis.”

Despite his claims of working primarily in the South, it’s important to note that his best known locales were in the north.

Out of Minneapolis, in the AWA as Dr. Moto, he teamed with Mitsu Arakawa to hold the AWA World Tag team titles. (His resume of tag team partners reads like a Who’s Who of Evil: The Sheik, Abdullah the Butcher, Great Mephisto, Nikolai Volkoff, Killer Karl Krupp, Tojo Yamamoto, Tiger Jeet Singh.) He also had a stint in the WWWF as Killer Tor Kamata with Classy Freddy Blassie as his manager, which he lists as one of his favorite territories.

But it was on the Calgary Stampede Wrestling scene that he succeeded best, both personally (where he met and married his wife of 21 years) and professionally, holding the Stampede North American title on three occasions in 1971-1972.

Kamata made more of impression than with just his catch-phrase “No-o-o-o-o chancee, Mis-tah Whalen.” In a March 2000 column, Bret Hart recalled the epic feud between Kamata and Cowboy Dan Kroffat. ” I remember Kroffat fighting Tor Kamata in a ladder match in Sept. ’72,” Hart wrote. “There was a big bag of money hanging over the ladder and that night when Kroffat won he jumped for joy and threw handfuls of 100s and 20s out to the crowd that had cheered him on. I managed to get a $20 — which I still have.”

As for the catch-phrase itself, former Stampede promoter and photographer Bob Leonard explained its origin. “Tor used to try to flatter Ed in promos, and promise to gift him with wonderful things from Japan — silk suits, silk shirts, and so on — and then somehow weasel out of his promises with that phrase. He used it in other connections too — ‘he’ll never beat me’, etc. When Ed was unable to do the show now and then, a chap named Brian Dance took it over, so Tor morphed it into ‘no-o-o-o-o chancee, Mis-tah Dancee’.”

Leo Burke was often on the other side of the ring against Tor Kamata. “Tor had the gimmick there. He was always overweight, but he could still go,” Burke said. “He was great to work with. He was very flexible. So many guys if they have to go under (lose), they think it’s the end of the world. He was not that type. I can’t say anything bad about Tor.”

Kamata, remembering those who tutored him in Hawaii, was always quick to help out other newcomers. One of them was Don Gagne, who later achieved greater fame as Frenchy Martin. He said that Kamata and Chin Lee were a great help to his career and helped him learn the business. “You should do this, you should watch this. He kind of helped me a lot, him and Chin Lee,” Martin said. “Naturally, when you’re a writer, you probably think that the babyfaces are the good guys, but it’s all upside down. The heels are the good guys.”

During his first trip to Canada, starting in Montreal for the Rougeaus, Kamata met Abdullah the Butcher, who would become both a friend and a foe. “Abdullah and I were the arch-enemies against each other,” he said. “We really drew the crowds. Abdullah would be the one that comes into the territory first, and he gets the territory going. Then they bring me in. Of course, he and I look almost alike, so we start going against each other. That’s how we drew. We drew a lot here in Calgary too, Stampede.”

Kamata is also recalled by friends for his hospitality and for his culinary skills. In the 1970s, he even owned a small restaurant in southwest Calgary.

Today, Kamata keeps in touch with some of his old friends, some of whom still live in Calgary like Tokyo Joe, the Harts, and Gerry Morrow, and those more far-flung, like Mr. Hito (“my tag team partner”), who runs a restaurant in Japan.