As NWA-TNA Impact gets set to hit the airwaves later this week, the stars of the fledgling wrestling company, including Canada’s own Traci Brooks, are readying themselves for what will be a lot more exposure.

Brooks, a native of St. Mary’s, Ontario, recalls that when the news came down, she, along with the rest of the locker room, were incredibly excited about the potential for Impact, which debuts this Friday on Fox Sports Net. 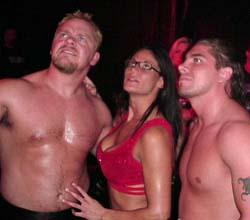 “When all the rumours were confirmed by Jeff Jarrett, the talent was ecstatic,” Brooks told SLAM! Wrestling. “I think we all feel the same way when I say it’s about time.”

While Brooks looks at the show as a great opportunity for more exposure for TNA, a company that has only been around for two years, she also sees it as a stronger move for the industry as a whole.

“It’s time there was competition for WWE,” she says. “You need competition, you need an alternative or the product gets stale. There are so many talented wrestlers in this world that with two major wrestling companies they will have more of a chance to be discovered.”

Brooks has been most recently been working in an angle with two of the hottest stars in TNA, Shane Douglas and Michael Shane. Working with “the Shanes” has been very beneficial for the former Sunshine Girl, and she has enjoyed working with both the wily veteran and the up-and-comer.

“Shane Douglas has forgotten more about wrestling than I will ever know. He is an amazing teacher and one of the most giving people I have ever met. With all his stories, advice, help, and years of experience I could never have asked to manage a better worker,” she says. “Michael Shane is also another guy who has helped me out a ton. He is always giving helpful advice and putting his body on the line to have great matches to entertain the fans of TNA. Michael Shane is well on his way to making an impact in this business.

Brooks has not only been advancing her presence in wrestling in the ring, but out of the ring as well. Recently, she began writing a column for Sportsology’s wrestling site, where she answers questions from her fans. Brooks notes that she has enjoyed the interaction with her fans.

“I love the column that I am doing for Wrestleology. It gives me a chance to get to know my fans and for them to get to know me a bit better too. Some of the questions are a little too personal for me, but it’s all in good fun,” she says.