For 13 years, the popular primetime soap opera Dallas dominated television viewing on Friday nights. Now, 13 more years after arch-villain J.R. Ewing finally hung up his Stetson, a different sort of “Dallas” hopes to be part of a long-lasting TV tradition that kicks off this week.

The tall Texan known as “Dallas” is set to play an integral role in the Total Nonstop Action (TNA) Wrestling “Impact!” show that will debut at 3 p.m. local time Friday on most Fox Sports Net affiliates. 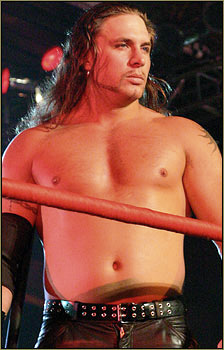 “To be put on the first set of television tapings is a pretty big privilege and I’m really looking forward to it,” Dallas told SLAM! Wrestling. “It’s really an honor for a young guy like me to be there.”

The national cable exposure is a prize that TNA has been seeking since its inception in 2002. The shows, taped at Universal Studios in Orlando, will be the first widespread cable competitor to WWE programming since World Championship Wrestling went off the air in 2001.

For Dallas, who most recently wrestled as Shadow in the Dallas/Ft. Worth-based Professional Championship Wrestling (PCW), the appearance on “Impact!” culminates a frenzied three months that has elevated him from independent circuit hopeful to co-holder of the TNA tag championship with veteran Kid Kash.

Dallas, who has a solid athletic background and good size at 6′ 9″ and 290 pounds, worked a match on the syndicated TNA Xplosion show in early February. While TNA officials told him they liked his performance, “it wasn’t like anything happened because of it,” he shrugged.

He wasn’t scheduled for another match on Xplosion until May. To keep his name afloat, he accompanied a friend to one of the weekly TNA pay-per-view shows in Nashville on March 24, hoping to wrestle in a tryout match. Suddenly and unexpectedly, he was paired with Kash as part of a major tag team tournament.

“I got there and they said, ‘Congratulations, man, you’re on the pay-per-view.’ I said, ‘What?’ ” he recalled with a laugh.

The inspired pairing of the small, agile Kash and his larger-than-life partner – at first billed only as a Kash “relative” – topped Simon Diamond and Sonny Siaki when Dallas laid out Siaki with a pipe.

Immediately thereafter, TNA head Jerry Jarrett complimented Dallas and asked him the ultimate question: “Do you want to work with us?” Dallas accompanied the legendary Tennessee promoter to a computer, read and signed a contract, and joined TNA.

But that was just a minor gale compared with what came next. The following week, Dallas and Kash became the TNA tag champions, beating Christopher Daniels and Low Ki. They briefly lost the belts to D-Lo Brown and Apollo on a disqualification, before winning them back on April 21 in the same fashion.

“My head is still spinning,” said Dallas, who went out of his way to praise more seasoned TNA wrestlers. “I still consider myself the new guy. I worry a little bit about coming in and getting the belt when guys have been around here much longer than me.”

Add that to the fact that tag team wrestling “is a brand new puppy dog for me,” Dallas said. Most independent promoters book singles matches instead of extensive tag team action, so Dallas acknowledged that he has had to make “a big-time adjustment.

“It’s totally different in the way you have to know your spots, but not necessarily every spot in the whole match. And you basically try to energize the crowd when you’re not in the ring. But it’s a good way to get experience.”

Fortunately, he’s been aligned with Kash, who has long been regarded as one of the top wrestlers on TNA and independent cards. “He’s an amazing worker and that’s definitely rubbed off on me,” Dallas said. “He’s one of those guys where you know he’s a wrestler, but then, when you finally see him wrestle up close, you say, ‘Wow!’ He’s been really good with me.”

Wrestling was not originally in the plans of Dallas, who has also entered the ring as Breakdown and Lance Steele (nee Hoyt). He was a multi-sport athlete in high school, playing basketball, football, and baseball before attending Southwest Texas State (now Texas State University) in San Marco, Tex.

There, he played football, but, by his senior season, understood that he couldn’t make a career in the sport. Working at a nightclub while in school, he encountered an acquaintance who hooked him up with wrestling trainer Solo Fiatala, himself a trainee of the legendary Ivan Putski.

Dallas drove the 90-mile roundtrip between San Marcos and Fiatala’s school in Austin at least three times a week to learn the ropes and made his pro debut in 2000 against Tarzan Taylor.

He spent long hours on the road in the huge Lone Star State, wrestling for a variety of promotions, including one directed by WWE star Shawn Michaels, and competed against names like Paul London and Ahmed Johnson.

With his good looks, size, and athleticism, he shot to the top in PCW in 2003 – “by far the best promotion in Texas,” Dallas said. He won the PCW heavyweight crown twice and also claimed the PCW TV title.

His PCW guise as Shadow was carefully crafted to follow the model of the dark, brooding, trenchcoated “Crow” character created by Sting, Dallas’ favourite wrestler.

“I really didn’t watch much wrestling when I was a kid. I started watching in about ’94 and the Crow thing was something I really identified with,” he said. “For me, the idea of being a wrestler is as a comic book character. Shadow was really the persona I wanted – a dark, gothic persona with a lot of excitement and a lot of energy.”

He had hoped to bring that attitude to TNA, but “they needed something different and that’s fine with me.”

While Dallas has encountered success in the ring, nothing compares to the fact that he was able to meet Sting and square off with his idol in a match that is slated to be in a planned film about “The Real Sting.”

“I got to meet him and they asked me to be in part of the movie. There’s one match in there with me and Chris Harris versus Sting. I would love to wrestle him in a real match, but that was great,” he said.

Perhaps Dallas’ most interesting experience is yet to come. TNA has announced it will employ a six-sided ring for the “Impact!” show, providing all kinds of new opportunities for whips, turnbuckle action, and moves as-yet-unknown.