A professional wrestling star fallen from grace, a young girl heading for trouble and a chance for redemption. This is the saga of El Zombo, found within the pages of the newly-released comic book, from Dark Horse Comics. 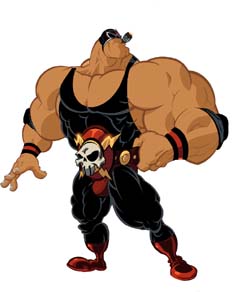 At the helm of this story is the Southern California creative tag team of Kevin Munroe and Dave Wilkins, who spoke with SLAM! Wrestling about their unique comic endeavor.

“It’s basically an angel on my shoulder story,” said Munroe.

The tale focuses on the masked grappler, El Zombo, whose arrogance and contempt for the wrestling business catches up with him in the form of being murdered in a hail of gun fire. Destined for the fires of hell, El Zombo agrees to a second chance and returns from the afterlife, assigned to look out for 10-year-old brat, Belisa Montoya, who is being stalked by an unknown menace.

“He (El Zombo) was just buried in my subconscious, he had always been there,” explained Wilkins.

“I was drawing him in my notebooks since I was like nine years old. I didn’t know how or what form that I was going to exercise him in. It wasn’t until I actually moved out to Southern California saw how much of the luchador culture existed, that I knew that I needed to get him out – in comic book form, in an animation form, in a movie form, anything I could do.”

Coming on board to help bring El Zombo to the masses was Munroe, a native of New Brunswick, Canada who had worked with Wilkins previously on a video game project. “We just started talking about comics and we had always wanted to figure out a way to do a project together. He had this character he had done called El Zombo; it was this picture of a guy who was all green and rotting. He had started this eight page mini-comic he wanted to sell and he said ‘Listen, do you want to work on this together?'”

Helping set the mood for Munroe was his own memories of attending independent wrestling shows while growing up in the city of Moncton. “I went to a show once in Saint John and another one in Moncton, it was fun,” recalled Munroe, drawing the comparisons with the humble venues he attended in youth, to the over the top, rock concert presentation of the World Wrestling Entertainment (WWE). “It was all folding chairs, I think the one in Saint John was in a high school gym and I still love it. I loved the idea of just having 25 people in there to watch.”

The duo of Munroe and Wilkins is an appropriate fit; both being admitted fans of lucha libre wrestling and the colorful, masked ring combatants who have garnered an underground following world wide. From the onset, the team would set out to mirror a high adventure setting that was the entrenched atmosphere of the El Santo movies, of which Munroe was also a fan of.

“It’s just this feeling of big adventure, big fun and characters who were just unapologetically them. That’s what I felt when I started working on El Zombo and it evolved into this great comedy based, action series,” Munroe said.

With Munroe having contacts within Dark Horse from previous work with them, El Zombo was presented to company founder Mike Richardson who embraced the unique allure of the character and story immediately.

“We sat down with Mike and showed him the art and between a minute and two minutes he was like ‘Great, let’s do it,'” Munroe said. “Mike has probably one of the best story senses I’ve ever come across. He just gets what the story should be.”

One look at Wilkins’ bulging, muscle bound, cigar chomping El Zombo character and you are immediately struck with an aura of an impending tale that is bigger than life itself.

“Dave can do a few styles, but this – its Bruckheimer comic art. It’s just big and fun,” said Munroe. “Dave is one of these guys whose work ethic is insane that we just gelled together really well. I can only hope we get to do more stuff in the future.”

Bolstered by stellar efforts of colorist Tony Washington and the magnetism to pick up the mag and skim through the pages is hard to resist. “Tony is amazing, this guy’s so good. Between him and Dave, they make sure the artwork stays true to the story,” Munroe said.

Munroe himself was charged with piecing together El Zombo’s journey, one that involves his discovery that the very person he is charged to look out for, holds many of the very abrasive characteristics that El Zombo himself possesses. “She’s basically him in the form of this 10-year-old little girl. It becomes this really great partnership and over the course of time, he ends up seeing his own personality in her and forces him to come to some decisions about where he’s going in life and the afterlife. It’s just a fun story.”

Wilkins praised Munroe’s ability to take El Zombo and weave him into a compelling yet sensitive story line. “I had seen and read some of his stuff before, a lot of it in the family entertainment realm, where I thought El Zombo should be and Kevin just go it. I didn’t seem him like a hardcore, action Terminator style of guy,” remarked Wilkins.

Despite the long relationship between Wilkins and his El Zombo character, he admitted that his favorite masked wrestler was none other than the WWE’s Rey Mysterio Junior.

“That’s my number one guy right now,” he said fondly, admitting that he frequents the vibrant, lucha libre scene in Southern California that has played a pinnacle role in the development of his recent work. “It’s totally underground. You’ve got guys coming up from Mexico; you’ve got local guys from southern California putting it down. It’s really cool, that whole sub-culture is a world unto itself.”

Munroe himself acquired a dosage of Mysterio’s popularity while attending a WWE event in San Diego months ago. “Man, when Rey Mysterio came out, the place just popped. I had never heard anything like that, it was just crazy.”

In fact, Munroe is currently developing an animated feature with the WWE’s films division.

“The WWE project is really interesting. They want to get into the TV action animation and I think that’s a brilliant idea,” Munroe said, explaining how the world’s largest sports entertainment company had put out feelers for an animated series featuring the real life characters of the WWE.

“They went out looking for concepts. I just went in there and said I wanted to do something that was true to the spirit of the WWE, not necessarily wrestling itself. It’s Mission Impossible with these pro wrestlers as the main characters. It’s a big, fun action world that is friendly for boys action figure ages.”

As for wrestling action within the El Zombo comic itself, Wilkins made assurances that wrestling fans who buy the comic will not be disappointed. “The first story arc we tell is the history of Zombo himself and where he came from and where he’s going and I guarantee you, by the next story arc, there will be absolute, all out ring action. So please, pick him up.”

Ask for El Zombo at your nearest comic book outlet.