I’ll never forget “The Great Goliath.” He made a lasting impression on my foot while wrestling Mil Mascaras one night in 1970 at the famed Olympic Auditorium in Los Angeles, California. I was standing at ringside when Goliath came flying out of the ring throwing me into the front row seats.

When I stood up, Goliath was right in my face yelling and screaming while purposely stepping as hard has he could on my foot. He got a great kick out of doing things like that. With his partner, Black Gordman, they would often fly out of the ring to check out a pretty girl or to land on someone’s foot. Then they would get back into the ring look at you square in the face and laugh their heads off.

I was in Las Vegas, Nevada for the annual Cauliflower Alley Club Banquet when I received word that four days earlier in the same city, “The Great Goliath” had passed away after a series of heart attacks on April 12th. At first I couldn’t believe that this talented mat star had passed away. He was 69 years old. 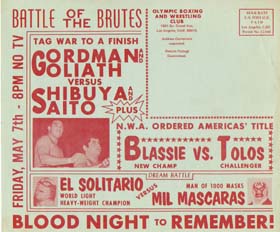 Pablo Crispin was born on June 18, 1934 near Juarez, Mexico. Believe it or not, he was paid for his first match with a six-pack of Coca Cola. After working throughout Mexico in the early 1960s, he captured the Mexican National Heavyweight Title on December 3, 1967 by defeating Henry Pirousso. He held the title for a full year dropping the belt to Raul Reyes in one of his first title defenses in the United States in Los Angeles, California.

Goliath stayed in the United States since that time, wrestling many of the top stars of that era including Andre The Giant, Mascaras, Chavo Guerrero, and many others.

However, true success was to come in 1970 when Crispin (Goliath) teamed up with another super heel from Mexico, Black Gordman. They proved to be a sensational tag team finally winning the Americas Tag Team Championship by defeating Earl “Mr. Universe” Maynard and Rocky “Soul Man” Johnson. They would go to hold this title over 18 different times wrestling such teams as Kinji Shibuya and Masa Saito, Rey Mendoza and Raul Reyes, Mil Mascaras and Dos Caras, and many other teams.

In the ’80s and early ’90s, Goliath made his home in San Bernardino, California and started a wrestling school. He put together wrestling cards using his students and headlined the various wrestling cards that he promoted. The last time he wrestled was on January 21, 1995. Ill health and age was a factor. Two months after that, he moved to Las Vegas where he settled until his passing.

Pablo Crispin was one of the first “south of the border” wrestlers to easily switch from the Lucha Libre style of wrestling to the American style. Crispin stood only about 6 feet tall; the name “El Gran Goliath” suited this true devoted wrestling giant very well.

He may be gone, but he will never be forgotten by the legion of fans he’s left behind.

Jeff Walton is the author of Richmond 9-5171, A Wrestling Story, and Scott Walton is his son, who egged him on to write it. The book is available for $20.00 plus $4.00 shipping by cheque or money order payable to Jeff Walton. Order from Scott Walton, 11450 National Blvd., Los Angeles, CA 90064. The e-mail is [email protected].