The wrestling world is paying tribute to the real master of the suplex, Harley Race. The “King” will be inducted to both the WWE Hall of Fame and the Pro Wrestling Hall of Fame and Museum this year. Race is excited about both honours.

“For someone to honour your career, it makes you feel good,” he told SLAM! Wrestling. “I’m flattered they are honouring me.” 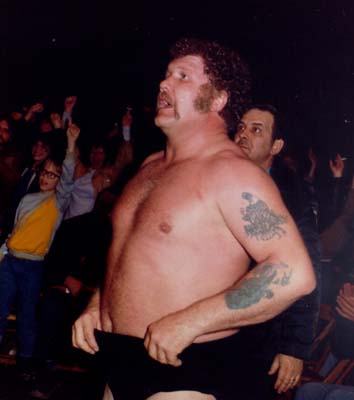 When asked about who he would like to have present him with the award Race was satisfied with what the WWE has in store for him.

“I don’t think I can get better then what I’ve got. They told me Ric (Flair) will be presenting it to me. That’s awesome,” he said.

As far as the controversial induction of Pete Rose goes, Race is not giving it a second thought.

“Pete deserves to be there. He’s been in three manias. As far as his baseball he had a phenomenal career,” he said. “I’m very happy to see all of them getting in there. I can’t wait to see them all.”

Race holds the WWE Hall of Fame in high esteem and see the likes of “Stone Cold Steve” Austin and The Rock as future inductees too.

“Bret’s (Hart) another one they’ll be inducting shortly too,” he predicted.

Harley Race began training for his wrestling career when he was merely a teenager. Ever since, he’s set the standard for others to follow.

“Everybody that does the suplex left-handed, is because that’s the only way they saw it done when I invented those things,” he said.

Race is probably most remembered for his rivalry with the Funk family and his countless epic encounters with the “Nature Boy” Ric Flair. However, after his wrestling career came to a close he became a manager. After all these years, Race is still very much a part of the business. Along with Lou Thez, Ricky Steamboat and Lelani Kai, he trains new young talent in Elite Pro Wrestling Training.

“We’ve got six to eight kids now that I’m training,” he said. “I’ve had four guys on Smackdown! and Raw the last time they were in Omaha. Now I’ve got two in Japan.”

Still a major force in the Kansas City scene, Race will also be co-hosting a new radio segment about pro wrestling on a local station.

Race has strong feelings about Canada, the Hart family and his matches, including his title win against Terry Funk, at the Maple Leaf Gardens.

“I really enjoy coming to Canada. I liked working at the Gardens,” he said. “Especially the East. I’ve been all over Canada.”

“The last time I was in Canada was for first Helen’s and then Stu’s funerals. It’s an endless loss for Canada and wrestling. If not for his wife, Stu wouldn’t have been able to do what he was able to do.”