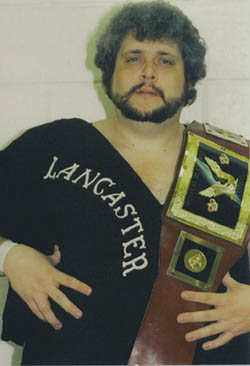 After over a decade of silence, Jim Painter’s Midwest Championship Wrestling is about to resurrect and breathe new life into its old stomping grounds.

The once-adored promotion has been laying dormant for nearly 12 years as its promoter, workers and fans looked back with fond memories remembering what used to be.

Well, come February 21, all of that will come to an end.

“I’m really excited,” said Painter, who is better known to wrestling fans as Big Jim Lancaster. “The business has changed so much over the years.”

Painter wasn’t satisfied with just looking back at years upon years of memories. So instead, he pulled out his old bag of tricks and has donned the familiar role of promoter, hoping to once again make MCW a powerful force in professional wrestling.

MCW will make its highly-anticipated return to the McBroom Gym in St. Marys, Ohio on February 21st with an 8 p.m. bell time.

The event will not only mark the return of MCW, but it will also be the return of former MCW youngster and current WWE star Al Snow to one of the very first arenas he ever worked in over 20 years ago.

Snow will step inside the ring, returning with “Head” – his most popular gimmick, to square off against Bad Brian Beech. Beech is one of the top-rated independent wrestlers currently seeking entry into the WWE.

“I’m real excited about coming back and getting to wrestle,” said Snow during an appearance at St. Marys Memorial High School to publicize the return. “(The St. Marys fans) were always fun to work in front of. There are a lot of memories and good times for everyone.”

Speaking of those memories, a special ceremony will be held prior to the event where Snow will be among the first competitors honoured for their work, heart, dedication and character. Snow, among others, will be inducted into the Midwest Championship Wrestling Hall of Fame.

Along with Snow are 15 other deserving inductees who will be named to the MCW Hall of Fame. The hall of famers to be inducted are Jim Lancaster, The Flying Tigers (Larry Wilson & Carl Ben Patrick), The Kansas City Outlaws (Psycho Sam Cody and Roughhouse Roger Ruffin), Rick Lancaster, Mickey Doyle, Flying Fred Curry, Luis Martinez, Sgt. Bobby Golden, The Patriot (Greg Lake, not to be confused with Del Wilkes, of WCW and the WWE), female grappler Lisa Crockett, and referee Rick Johnson.

Posthumous awards will also be presented in honour of Bobo Brazil and Mighty Igor, whose wrestling careers are widely known and respected.

Here’s a run-down of the honorees:

Painter says looking at the list of “legends” is remarkable and allows you to look at the progression of the business.

“You see guys who were young like Snow and then you look at Bobo, Igor, Curry and Martinez. These are the same guys I looked up to. First I was a fan, then I put them over and then they worked for me. They were icons.”

And then there’s Snow, himself. Snow has become the pride and joy of MCW. He was one of the promotion’s – and Painter’s – first students and has made his trainer and old friends very proud.

“Al was a natural from the word go,” said Painter. “He was a leader in the ring and in the dressing room. And he knew he wanted to be a wrestler from the start. He definitely had the drive and natural ability. It’s funny; he couldn’t play baseball and wasn’t good at normal sports, but he loved wrestling. He was fascinated about it… it drove him. And he wasn’t going to stop until he got it.”

The same passion Al showed for the business is the very same characteristic that has made MCW a memorable part of pro wrestling history that Painter can’t let go of.

He hopes his former peers, and new workers alike, will carry on the MCW tradition and ensure that the promotion continues long after Saturday’s return show.

“It’s been so long, I’m afraid to look past this one,” said Painter, who has been a freelance writer and Christian testimonial speaker over the last number of years. “But I’m hoping we can keep doing it. We don’t have a lot of big stars, but once (the fans) see our shows, they’re not gonna go home disappointed.”

And why fix what’s not broken? The same belief of entertaining fans and dedication is exactly what helped MCW create a name for itself during it’s decade of existence.

Painter opened MCW in 1981 from his home in Jackson Center, promoting matches in Ohio, Indiana, Michigan, Pennsylvania and West Virginia.

He admits the success of Vince McMahon and the WWE played a large role in the subsequent success of MCW and its wide popularity.

“We got caught up in the wash and picked up the gravy.”

Painter started his promotion as a caring citizen looking to hold a fundraiser. His promotion would raise funds for local facilities and groups through ticket sales and in exchange, competed in entertaining exhibitions that quickly became very ‘over’ with the local fans. Painter also enjoyed passing on his knowledge to those who loved the business as much as he did.

“MCW gave guys an opportunity to work in a business that very few get to be in. It gave them the opportunity to do what I did. And I’m very thankful for that.”

Painter said he wants MCW to be remembered for the little things fans may have never noticed or given much thought.

“Our guys would sign autographs until everyone who wanted one had them… even if we had to delay the show. It may sound minor, but we were always about more than just what happened inside the ring. Wrestling is big and whether we’re big or not, we’re not going to send these kids away from the shows without something in their hands. It was more than just money. It was always more than money.”

Painter also said he wants fans and wrestlers alike to remember MCW as the promotion that always gave fans a good show.

“We’re a show they can go to and hear no vulgarity, see no beer cans or some guy giving the finger. We’re a show somebody can take their kids to and have a decent time without being offended.”

And for those who compete in MCW, they’re part of a tradition and history that is about to be revisited.

Whether MCW has one show left in the tank, or is about to catch its second wind, Painter and his promotion have established themselves as a memorable piece of wrestling history. A history that will be relived this Saturday.

Aside from Snow’s MCW return, other bouts include a match for the Tri-State Tag Team Championship as The Young Lions – Jay Donaldson and Ryan Stone, will defend their titles against Dead Sexy Matt Parks and Too Bad Chad Allegra.

In a women’s match, top female performer Sin-D, along with her manager Austin Meddler, will takes on Peaches, a newcomer from Georgia. A single match also pits The American Eagle against Christopher Michael Lotus.

Tickets are $13 for ringside seats and $10 general admission in advance at all St. Marys city schools and Albert Sporting Goods. All tickets are $13 the night of the show.