Pacific Cup a chance for talent to shine

As each New Year begins, the eyes of Western Canadian talent and fans turn toward Extreme Canadian Championship Wrestling’s annual Pacific Cup. Formerly a two-day event, the tournament has had independent stalwarts like Asian Cougar, Christopher Daniels, The Ballard Brothers and American Dragon joining Canadian talent like Scotty Mac, Black Dragon and Tony Kozina to compete for the prestigious tournament. This year 12 men are preparing to go head to head in the 4th annual Pacific Cup at Bridgeview Hall in Surrey, British Columbia.

“No one has had a repeat performance winning the Pacific Cup. That is something I am striving to do, win it two years in a row. The Cup is getting more recognized in the NWA and Canada so for me to do that would really raise my profile,” last year’s winner Scotty Mac told SLAM! Wrestling. In 2003 he went through Chance Beckett, Tony Kozina, Black Dragon and American Dragon to win the Cup.

To the participants, 2004’s tournament is a big opportunity.

“It’s Canada’s top independent wrestling tournament of the year,” said Aaron Idol. “It is a positive experience, as it gives you a chance to test your skills against other top competitors, as well as allowing you to create a benchmark, with regards to your own progress within the sport. It is an excellent opportunity to showcase what you bring to the table.”

NWA Canadian Junior Heavyweight Champion Major Hardway agrees. “The Cup is a symbol of excellence. There are other tourneys around North America but the West Coast is often overlooked due to location and cost of bringing talent in.”

Many fans are excited to be seeing the return of Jack Evans to the Pacific Northwest. When he broke into wrestling he was on the All-Star Wrestling roster, but this is his first visit to ECCW. Like Daniels and Danielson before him, Evans is making an impact on the independent scene through Ring of Honor and other U.S. promotions. Often times he has to travel across the country for shows, so it is a treat to be able to wrestle just a few hours away from his home in Washington.

“I used to wrestle in that building with All-Star so that will be nice to head ‘home’. To not have to travel far for a show is a luxury these days, not that I am complaining!” he said. 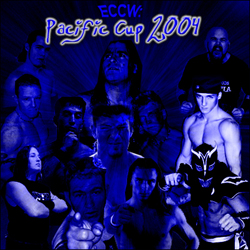 For Alberta’s J.D. Michaels it is the chance to prove himself outside of Edmonton. “It is a well-know, well-respected tournament that features the elite, and to be invited to be a part of that has me excited. It is a great launching pad to get more notoriety and to expand your awareness to all involved with indy wrestling. Plus, you get a chance to work with some talent that you wouldn’t get to very often and that does nothing but benefit the career. Anytime you get to make a first impression, you have to capitalize on it and make the biggest, lasting impression you can. I will show the Vancouver fans what J.D. Michaels is all about and what he brings to the table, and I guarantee you I will leave them wanting more.”

“Without a shadow of a doubt that to be in this show you must be worth some dough,” said Disco Fury. “If you were a nobody then you wouldn’t be in it. These people were hand-picked to make a impact. You have guys who have toured in Japan, around the U.S., and two out of the three past winners in this year’s Cup. The competition will be good.”

Even those not involved in the tournament are keeping their eye on it. Adam Firestorm’s recent relocation to Calgary prevents the three-time participant from competing this year but he says he will be watching closely. “The Pacific Cup is by far the most prestigious event in the Northwest. There’s always some outside talent that comes in, just to be involved. It’s a night where everyone knows that they must be at their very best. Just by being on the card you have some big shoes to fill considering who has participated and won in the past.”

As wrestlers in B.C. prepare for the grueling three-round tournament Firestorm commented on how the tournament has changed over the years and what participating in it has meant to wrestlers and the promotion. “The great thing about the Pacific Cup is that every year it’s a little different. One year there’s a guy from Japan in the mix that nobody had seen live in North America before. The next year you have Christopher Daniels and The Ballard Brothers from California. The year after that American Dragon steamrolled over everyone and Scotty Mac shined through. This year it looks to be a combo of the old and the new. Tried and true guys that can get the job done, and the new generation of great competitors like Ryan Wood and Jack Evans.”

Wood, who wrestles frequently in Minnesota and Manitoba, competed in last year’s Cup and was eliminated by Black Dragon after a being victimized by a shooting star press to the floor. “I would love to wrestle Dragon again. He knocked me out last year but revenge is sweet! I know I am not the favourite to win this year, but I am going to turn heads and go as far as my talent can take me, hopefully catching a break or two along the way.”

It seems everyone has their eye on someone else in the tournament. Veteran Tony Kozina seems to be on everyone’s hit list, as does Chance Beckett, who trained many of the up-and-coming ECCW stars.

“I’ve said that right to him, that I hope I get to wrestle him again,” said Mac. “I’d like to wrestle Jack Evans as well because I was on a Matrats show with him and was really impressed with what he can do, that would be a fantastic match.”

Evans returned the compliment. “I remember being impressed when Scotty Mac wrestled for Matrats, I would love to lock up with him. Dragon, Beckett, I’d love to pull a match with any of them.”

“For me there is no question, Chance Beckett. He is my trainer, and I have the utmost respect for him,” Idol chimed in. “I have never had the privilege of stepping into the ring with him, and I know it would definitely be a good, hard fought match. When it comes time to wrestle, my respect for him will not cloud my view of the fact that he stands between me, and winning the Pacific Cup.”

Black Dragon and Scotty Mac have a lot of history. Not only did Dragon lose the ECCW title to Mac in 2002, but in 2003’s tournament he lost to him in the semi-finals. Since the two now work for different companies, Dragon wants another shot.

“I always have my eyes on Scotty Mac!” he laughed. “We beat each other to death every time we wrestle.” It is notable that the Cup has no promotional boundaries. Wrestlers are invited from many places, and that includes rival B.C. promotion All-Star, where Dragon is now a regular. His appearance is a one night special attraction.

On February 6, Mac and Idol teamed up to defeat Dropkick Murphy and Disco Fury, and afterwards had a very heated in-ring conversation over the tournament. Scotty hopes that their paths will cross during the night.

“He and I have been around for the same amount of time and rising in the ranks at a similar pace. He is just as respected as me, and our matches have been really different and good. Our last match, along with my match in last years Pacific Cup against American Dragon, was my toughest match ever. I would be earning a win if I had to wrestle him.”

In 2003, the tournament will take on the same format as it did in 2000, with 12 wrestlers starting and the final three men facing off in a triple-threat match. As longtime ECCW fans debate over what fantasy match they hope to see close the event, the participants themselves have their own ideas. Major Hardway has unfinished business with Kozina and a great deal of respect for Beckett, and would love to face them in the finals. Mac would like to go up against Kozina and either Idol or Dragon, while Fury doesn’t seem to care.

“Major Hardway, Scotty Mac or Black Dragon. Just so I can say that I have beat them all again,” Fury said.

With the talent involved, 2004’s Pacific Cup is shaping up to potentially be one of the best ones yet. Adam Firestorm hopes fans will check it out.

“If you have the opportunity to catch the Pacific Cup, do it. The guys there know that this card is not ‘just another show.’ If you are not an indy wrestling fan you will become one after this show. It’s a rare chance to see the very best of the Northwest all together on one show. Looking at the experience alone, you have guys from Japan, England, Ring of Honor, ECWA and all over the U.S. and Canada.”

The talent in the tournament isn’t what concerns the confident J.D. Michaels. All that matters to him is the chance to show what he has to offer. “Vancouver fans, get ready. The Superstar is on his way to ECCW and I ain’t coming in quietly. Wrestling is in my blood, and each and everyone of you will find out first hand when I win the Pacific Cup and further solidify the fact that I am the man and the top junior heavyweight going today. I will give the fans every pennies worth of their admission and then some.”