To wrestling fans, Billy ‘Dinty’ Parks, who died this week at 83, leaves behind a now-common move called the Sunset Flip. To those who knew him in North Bay, Ontario, he leaves behind fond memories of days at the Sunset Park Motel and Cottages.

Born and raised on a farm in North Bay, Parks was into hockey and football as a youth, but always looked up to his brother Herb, 11 years his senior, who had taken a real shine to wrestling, both amateur and professional. 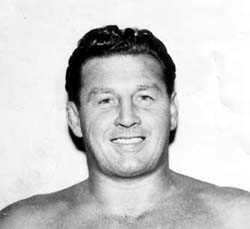 Herb was a favourite to represent Canada at the 1932 Olympic Games in wrestling, but his hopes were dashed when he broke his ribs. Herb turned pro, and would encourage his younger brother to go to the YMCA and develop his amateur mat skills.

After a stint in the Royal Canadian Air Force during World War II, with the 432nd Bomber Squadron, Bill was discharged and wrestled amateur until heading west to turn pro alongside his big brother.

In April 1947, Bill Parks entered the pro ring for the first time in a battle royal for Don Owen in the Oregon territory. His first singles match was a few days later against Gorilla Poggi.

Bill Parks would wrestle for 20 years, until 1967, but it was not a full-time gig for him, and his obituary in the North Bay Today newspaper claims he had “more than 500 matches” during those 20 years, including TV appearances on the Dumont Network.

In 1954, Parks bought the Sunset Park Motel and Cottages in North Bay, operating them with his wife Barbara until 1972. He was a regular on the summer wrestling tours promoted by Larry Kasaboski in Northern Ontario. During the winter, the couple went to Florida, and Parks would wrestle on occasion there as well.

Though he may not have been the first to actually perform the Sunset Flip — rolling over an opponent and using his momentum to bring his foe into a pin position — Parks definitely gets credit for popularizing and naming the move after his business.

Fan Jack Caldwell shared his memory of Bill Parks in an email with SLAM! Wrestling, having been a kid in Florida who knew Bill’s son, Chris. “Bill was a face and he did not use any fancy gimmicks. He was a nice guy and he had a classic Canadian accent, saying ‘eh?’ at the end of his sentences,” wrote Caldwell.

North Bay’s Craig Wallace recalled taking swimming lessons at the area known as Sunset Point where Parks had his park. The land is now a city park.

According to Scott Teal’s Whatever Happened To … ? newsletter from 1994, Herb (also deceased) and Bill Parks worked as a tag team for many years, including stints for Al Half in Columbus, Ohio, Cliff Maupin in Toledo, Ohio, Dory Detton in Amarillo, Texas.

Bill Parks’ top title was the North American Junior Heavyweight title in 1960, a belt defended in Northern Ontario and sponsored by Labatt’s. He was inducted into the North Bay Sports Hall of Fame in 1991.

A cause of death was not reported in the obituary in the North Bay newspaper. Parks died in Florida.