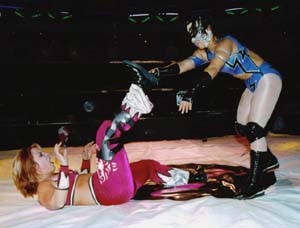 MONTERREY, Mexico – Nestled in the Sierra Madre mountains in the state of Neuvo Leon, lies the city of Monterrey. It is the third largest city in Mexico, holding the proud distinction of being the industrial heart of this nation of over 100 million people.

Driving through the city, one can see the entrepreneurial spirit that has taken hold here. Modern amenities such as office buildings, hotels, and malls dot the urban sprawl. Consumers here have little problem finding a diverse selection of modern products to choose from.

But this community holds another distinction; that of being the home of Mexico’s only all-women’s lucha libre promotion.

“I have followed wrestling for many years,” said de Luna in an interview with SLAM! Wrestling. “When I was a boy, I would go with my father to watch wrestling. To me it was spectacular.”

It was those early years that de Luna was privileged to watch the many lucha libre stars do battle in the squared circle. Included among those he saw were a select few women wrestlers (luchadoras). They included such names as Lola Gonzales, Irma Gonzalez, Irma Aguilar, and Sirenita.

“It was something very different to see women wrestling,” recalled de Luna, explaining that women wrestlers were not a common thing to see at many lucha shows. “They were very good wrestlers.”

In time, de Luna grew into manhood, all the while continuing to enjoy wrestling. But he also noticed a disturbing trend with many lucha promotions not having any women wrestling. “For me, to not have women wrestling on a show is incomplete,” de Luna said.

After graduating from school, de Luna set out into the business world, running various businesses while also working as a civil servant. Among those ventures he chose to pursue was promoting wrestling. Needless to say, de Luna wanted to ensure that any wrestling shows he promoted had women on the card.

“When I started, I worked with another promoter to help me and provide contacts,” he said. “He would say we can do one women’s match and I said no.”

Wanting to see women featured more prominently on his wrestling shows, de Luna sought out women wrestlers in the Monterrey area. Seeing the potential to create something unique in the lucha libre landscape, he decided to open a promotion owned solely by him, featuring only luchadoras.

On December 13th, 2000, the LLF was born, but with it came challenges that any new business must face and that is exposing your product to a buying public.

“Many people said that I could not do this. But I had such a passion to create a place where women could wrestle,” de Luna said. “It was complicated to start because we were the only company that featured only women. We are always trying to educate the people and have them come and see the show.”

With perseverance, de Luna has kept the LLF going, holding almost weekly shows in Monterrey, which is a significant accomplishment, bearing in mind the opposition he faced from other promoters. “When I started, they (promoters) didn’t like what I was doing. So, some of the women wrestlers who worked for them would not work with me.”

Facing potential strangulation on female talent, de Luna looked to importing female workers from the United States and Canada. This course of action was also a way for de Luna to hook fans into coming to see something different at his shows.

“The American and Canadian girls bring a different style, but I like the combination,” de Luna said, explaining that the promotion saw a merging of wrestling styles, once again, making for a unique in-ring product. “I think the girls who come from the States want to learn more about the Mexican style, which is aggressive.”

Although opened minded to bringing women from across the border to his promotion, de Luna is vigilant about making sure they can endure the lucha style. This in part comes from seeing the current women’s wrestling shown by the WWE. “I see very pretty girls, but the matches only last about five minutes,” he observed. “Here, it is two-out-of-three falls always and the matches have to be very complete and hard hitting.”

Among those who have traveled to Mexico more than once to wrestle in the LLF is Montreal based wrestler, LuFisto. “I can never say no to Luciano when he calls me to come and wrestle for the LLF,” said LuFisto. “He always treats me right and I never got screwed by him, unlike other promoters I’ve worked for. I think he really cares about the girls and that’s why we always come back here.”

Only adding to her enthusiasm for the LLF is the vocal and supportive Mexican wrestling fans. “The fans are so great. The way they treat us, the way they respect us. You got all the kids jumping on you, asking for autographs and wanting to shake your hand,” LuFisto said. “I saw some girls making mistakes during their matches, but I never heard the crowd chanting ‘You f—ed up!’ or other disrespectful things you hear up here in Canada or the U.S. They (Mexican fans) enjoy and appreciate what we are doing out there.”

Echoing the sentiments of LuFisto was Los Angeles based wrestler Nikki. “I thought it (LLF) was run very professionally and I had a lot of fun,” said Nikki, (real name Nicole Tsugranes). The anniversary weekend for the LLF was Nikki’s first time wrestling in Mexico and she did not hesitate to remark on how much of impression both the promotion’s staff and fans left with her. “Everyone was really nice and it was an all around great experience. The fans really appreciated us going out there and entertaining them. They were really respectful. I absolutely want to come back.”

The past year has seen the LLF achieve significant attention from various media outlets. Unlike in the rest of North America, professional wrestling receives regular coverage by the mainstream media in Mexico. Most prominent of these is TV Azteca, which broadcasts programming right across the country. Several LLF matches have been featured on the station, giving de Luna the kind of exposure he long sought.

“We have had the opportunity to do several shows with TV Azteca. This has allowed us to show the people what the LLF is all about,” he said.

The end result has seen the LLF run a record number of live shows outside of the Monterrey area. With growing acceptance of an all-women’s wrestling promotion, de Luna has ventured into providing female wrestlers to other independent promotions in Mexico.

As demand grows for his product, de Luna now has his eyes set on opening a women’s only wrestling school in Monterrey.

While he may not be able to predict how far his promotion will go, de Luna remains adamant that he will continue to promote the LLF, no matter what obstacles he may face. “For me, this is a dream come true and I want to go as high as I can.”

Corey David Lacroix can be emailed at coreyatslam@yahoo.ca.

LuFisto and Princesa Sugey battle in the ring during the LLF third anniversary show. Photo by Corey David Lacroix