BIRCH RUN, Mich. — Despite being surrounded by hundreds of fans and a locker room full of friends and colleagues, never has a man looked quite as alone in the ring as Road Warrior Animal did on Saturday night during a tribute show to his late partner Hawk. 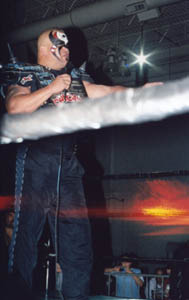 Partners for 21 years, the Legion of Doom team was torn apart on October 19th, when Hawk died during a planned move with his wife, Dale, in Florida. Following funerals in Florida and Minnesota, Animal was in the ring for the first time. A video tribute aired for those in attendance, recounting the rise of the Road Warrior phenomena. Following the video, a spontaneous “L.O.D.” chant erupted from the crowd.

Animal talked about how too many wrestlers were reluctant to credit each other. “You’re only as good as the guy you’re in the ring with,” he said. And Hawk was the best he could ever ask for.

For the main event, Animal returned to the ring without make-up to guest referee the match pitting a re-united Dream Team of Greg ‘The Hammer’ Valentine and Brutus ‘The Barber’ Beefcake against the Powers of Pain (Warlord & Barbarian), who were managed by Jimmy Hart. In a predictable, but much needed finish, Animal felled the Powers of Pain himself with Hart’s megaphone to help the awkward babyface duo of Beefcake & Valentine to victory.

After the show, Animal expressed his appreciation of the event to SLAM! Wrestling. “I thought the tribute was done very well down here. It’s hard in a secular event. I would have liked to have been able to share with the people the way Hawk had changed his life, in the last two years especially, to let them know that Hawk’s in a better place. But I didn’t get a chance and it wasn’t a situation that called for it,” he said. “But I thought the tribute was great. The fans in this area are great … We couldn’t ask for any better. Hawk and I just entered our 21st year. It was a real tribute to my partner. I liked having all the guys around the ring too.”

He finds it hard to believe that the team lasted 21 years. “I’ve been with Hawk since my first son was born. He’s 22. We’ve been together for a long, long time,” Animal said. “A lot of tag teams don’t last more than 10 years in the wrestling business, especially today how things have changed so radically. There’s not enough companies that last that long.”

Michigan hardcore wrestler Norm (Jeff Hill) was honored to be included in the tribute show. “The tribute they did to him was the most awesome thing I’ve ever seen,” he said. The unplanned march of all the roster to the ringside area for the tribute video was beautiful. “Everybody that was standing around the ring felt the loss right there. If you noticed, when everyone walked to the back, their heads were down. When we got into the locker room, there probably weren’t three words spoken. I’m so happy they did it.”

Chicago midget wrestler Meatball was another of those who was happy to be a part of it. “It was a great privilege to be a part of the tribute to Hawk. I grew up watching him, kicking a lot of ass, basically. No doubt about it, he’s going to truly be missed by the industry.”

At the morning’s card and memorabilia show, Valentine recalled Hawk’s last match in Oshawa, Ontario on October 3, as a part of Ted Dibiase’s religious ministry promotion. The Hammer teamed with Buff Bagwell in a losing cause against the Road Warriors, though the match had to end earlier than planned as Valentine cut Hawk hardway on the back of the skull with a chair shot.

Luna Vachon remembered Hawk as having a great heart, that he was more like an excitable little kid than a big, serious tough guy.

The professionally-run show drew 500-600 people to the Birch Run Expo Center, which is about 20 minutes north of Flint. The results were: Jimmy ‘Superfly’ Snuka beat the Brooklyn Brawler (with Jimmy Hart) in the opener; The Rock ‘n’ Roll Express (Ricky Morton & Robert Gibson) beat Gutter and Conrad Kennedy III; Luna Vachon pinned Malia Hosaka using her feet on the ropes that went unnoticed by special referee Percival A. Friend; ‘Hacksaw’ Jim Duggan and two local DJs beat The Honky Tonk Man and two other local DJs; Balls Mahoney beat Norm in a tables match, which was easily the highest-paced event of the evening; Pint Of Dynamite & Teo beat Meatball & Toad in a midgets match. After the match, Meatball stink-faced the referee with his bare bottom; The Vampire Warrior (Gangrel) beat Colossus; Valentine & Beefcake beat the Powers of Pain.

Lead promoter Steve Rau was pleased with the initial event. “I was definitely happy with the fan turnout, and I think we’ll be ready to do some more,” he said, adding that he might consider running a bigger city like Detroit or Grand Rapids next.