Sadly, the results of the shows were never posted on any major wrestling news web sites. The two shows, held October 10 & 11, 2003, drew a total of 600 fans with sell out crowds each night (standing room only on the second night). The events were held in the wrestling friendly town of Parkersburg, W.V., who came out to see some of the best talent from the independent scene. 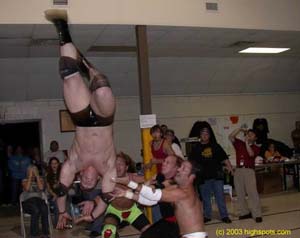 Rocky Reynolds on his way to a major concussion and 12 staples to his head. — Courtesy Highspots.com

Richard Arprin, the NWA President for the year, without any Internet promotion, put together two solid shows not only for their talent but also their timing. Past Anniversary shows had complaints of long shows filled with 15 matches or more. This year, the nights featured ten and eight matches respectively. Also, because the gym where the show was held was full a half hour before the show on Saturday, Arprin sent out some local talent in a sort of a dark match to warm up the crowd, something unheard of in independents. Arprin reacted well under pressure of a hot and ready crowd.

The crowd was almost brought to a sad standstill during the second night, as Rocky Reynolds, a local West Virginia wrestler fell off a ladder onto the hard tiled ground. He did not jump far enough, and hit head first. He ended up with a major concussion and 12 staples to his head. Reynolds did not recall the drive to the arena early that day but wanted to see a film of his fall after talking to those who visited him in the hospital.

NWA-TNA’s America Most Wanted put out a great 20-minute match for the crowd with The Naturals. AMW was able to work a longer match they normally would not be able to do at a NWA-TNA PPV.

6. 4 Way Ladder Match for The NWA Junior Heavyweight Title Match: Vinnie Viagra, Doubble Dragon, Rocky Reynolds and Champion Chris Draver ended with no winner as the match was stopped due to the injury to Rocky Reynolds.