While some might call my connection with the old Canadian title an obsession. I prefer to call it a quest … a quest for what is in my opinion, the Holy Grail of Professional Wrestling. Here’s my story.

Toronto, Ontario: Spring 1981 was when I was first bitten by the wrestling bug. Introduced to it by my schoolyard friends. I would spend countless hours in front of the television watching AWA All-Star, World Championship Wrestling, Mid-Atlantic Wrestling, Vancouver’s All-Star Wrestling, and my personal favorite, Maple Leaf Wrestling. 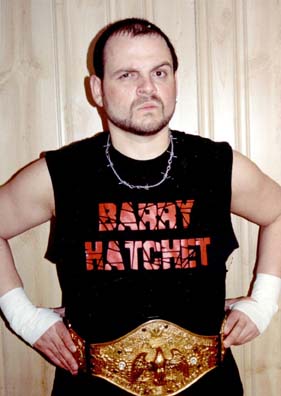 I was in love. I instantly became smitten with the squared-circle, collecting hundreds of “Apter” magazines, imitating my new idols during recess and dreaming of one day walking the ramp at Maple Leaf Gardens as my alter-ego the ‘Nomad of the North’ Wildcat Williams. While other kids were playing hockey and softball, I was planted firmly in front of the tube, wrists wrapped in sports-tape, wearing my Speedo “wrestling trunks” and cheering on ‘Rowdy’ Roddy Piper, Ric Flair and ‘The Boogie-Woogie Man’ Handsome Jimmy Valiant.

My first Maple Leaf Gardens card was in July of 1981. That night, something caught my attention for the first time — the championship title. Not just any “strap” but the Canadian Heavyweight wrestling championship. Angelo ‘King Kong’ Mosca battled the hideous Mr. Fuji in a Texas Death match. As Mosca walked down the ramp, the glare from the lights shining on the illustrious belt was blinding. I was awestruck. I couldn’t get over how awesome it looked. The eagle with its wings spread looking so majestic on the leather strap. I decided right then and there that I would one day become the Canadian Heavyweight wrestling champion. Wildcat Williams could not take the title from King Kong Mosca because there was no way two “good-guys” could wrestle each other; but being only 11 at the time, I figured I could cross that bridge when I got there.

In 1984 Vince McMahon’s monopoly of the wrestling industry continued and consequently Maple Leaf Wrestling as we knew and loved it closed up shop, rendering the Canadian title-defunct.

Then 1988 rolled around. After a couple of years of working like a dog at my after-school job and saving every penny, my dreams of mat stardom were shattered following a difference of opinion between me and my would-be tag team partner. That disagreement caused the cancellation of our fall enrollment at the Hart Brothers Calgary wrestling school. A few months later, I discovered the world of radio and the rest as they say is history.

The thing is, my dream of wrestling never really died, it just sort of transformed. Living vicariously checking out indy shows while enjoying a successful career “on-the-air”. In 2002 I decided to see what I missed out on. I met with Ron Hutchison and Rod Boudreau and the gang at Toronto’s AWF. A couple of “bad-bumps” and a torn rectos muscle later, I quickly came to the realization that things happen for a reason. During my involvement with the AWF, I discovered that their AWF title was actually in fact the old Canadian TV title out of the long defunct Maple Leaf promotion. It was the closest I had ever come to a “real” wrestling belt and I have to say, for an “old-school mark” like myself, it was awe-inspiring. It immediately brought to mind the simple question: What ever happened to the Canadian Heavyweight title belt?

Still being fairly immersed in the wrestling business from a hobby standpoint, I knew of a guy in Tennessee named Dave Millican who is a belt-maker and a collector of vintage ring-used belts. I sent Dave an email asking if he knew the whereabouts of the Canadian title. He said he didn’t’ know where it ended up so I pretty much came to the conclusion that it was probably hanging in Angelo Mosca’s basement or in Jack Tunney’s garage.

About a year later I stumbled across a great old-school wrestling chat site called the Kayfabe Memories message board, that just so happened to have a chat page devoted to the Maple Leaf Wrestling territory. Just for the hell of it, I posted an inquiry hoping that someone may know what ever happened to the “10 pounds of gold”. Low and behold, the same Dave Millican, who a year earlier didn’t’ know of its whereabouts, responded to my post claiming he owned one of the old Canadian titles. He emailed me a picture and after all this time — SUCCESS — it was the belt I was looking for.

I immediately pleaded with Dave to sell me this prized possession, basically telling him the story you’ve read here. It was not to be. He told me he only had it in his possession for a few months, having obtained it from an independent wrestling promoter in Maryland. As the story goes, this promoter had the belt for some time and was still using it in-ring. He had received several offers from nostalgists to purchase it. Millican was finally able to persuade the promoter to swap the piece of Toronto wrestling history in exchange for three new belts. Although I gave Dave my sob-story and offered him “the world” Dave said he had absolutely no interest in parting with his recent acquisition. He did however tell me he planned to restore the belt and if time permitted sometime in the future, he might possibly consider making and selling me a replica. He took my email and said if he ever became desperate, he would contact me, but not to hold my breath.

A few months went by and I have to tell you, I was putting myself through hell. Knowing full well it would probably never be mine, yet I couldn’t stop thinking about it.

Then one Monday morning, I arrived at the MIX radio station in Toronto to do the morning show with Carla Collins and, as I did to start every morning, I checked my Hotmail account. To my utter delight I read the name Dave Millican in my inbox. Before I even opened the email I knew what it was about. Dave had just purchased one of the NWA tag titles and was in need of some cash. Although he didn’t necessarily want to part with the Canadian title, he knew by selling it to me it would be appreciated and in good hands. In essence the belt was “going home.”

After much scraping and skimping and a couple of meetings with my bank manager, the day finally arrived. When Fed-Ex arrived at my door, I felt like I had just pinned Angelo Mosca. Now, after all these years, I was the Canadian Heavyweight wrestling champion! (What a mark, eh?!) A wise man was quoted as saying to me “You’ve been through enough … that you’ve done more to earn that belt than any of the ‘champions’ that wore it … LOL.”

For my new quest, I’m frantically looking for pictures or images of the 10 different Canadian champions pictured wearing the belt. They are Dino Bravo, Greg Valentine, Dewey Robertson, Iron Sheik, Angelo Mosca, John Studd, Sgt. Slaughter, Mr. Fuji, Ivan Koloff and Angelo Mosca Jr. Anyone with photos, magazine or Stranglehold programs images they’re willing to sell or make copies of please contact me at [email protected] The toughest ones to find seem to be Valentine, Fuji, Koloff and especially Mosca Jr. In fact I’ve been in touch with Big Ang and even he doesn’t seem to have a picture of Junior with the belt. I’m also researching the history of the belt and it’s travels since Maple Leaf Wrestling closed up shop. Any information or assistance would be greatly appreciated.

Special thanks to Andrew Calvert, ‘Beyond Salem’ Mike Cannon, Terry Harris and, of course, SLAM! Wrestling’s Greg Oliver, for their help in my obsessive pursuits.

Griff Henderson is a Toronto radio personality and, as you have just read, a tad obsessive about the old Canadian title. If you can help him with his quest, or perhaps recommend some qualified professional help, email him at [email protected] 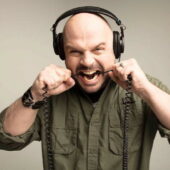 Griff Henderson is a 29-year veteran of the radio business. He can currently be heard hosting Griff and Caroline in the Morning, at JACK 92.9 in Halifax, Nova Scotia (jack929.com). Griff is a Toronto wrestling nostalgist and old-school wrestling fanatic. He is the Admin for the Maple Leaf Wrestling Archives Facebook Group and the Maple Leaf Wrestling Archives Instagram account.