Ray Gordy’s a Freebird too

Good gimmicks never die, they just evolve. A bit of wrestling history came to life again at a recent NAWA show in Rome, Georgia, when the presentation of a lifetime achievement award to Mr. Wrestling II was suddenly disrupted by The Extreme Freebirds — Tank, Iceberg, and Ray Gordy — entering the ring with Wildside CEO Rick Michaels. If you thought that last name looks familiar, you guessed right. Ray Gordy’s full name is Terry Ray Gordy Jr. and he is the son of the legendary Fabulous Freebird Terry “Bam Bam” Gordy.

Then on September 13, Gordy took the next step as NAWA Heavyweight champion, challenging NWA World champ A.J. Styles for the title. But like his father’s attempts to claim the NWA belt, he was thwarted, going down in 16:49. 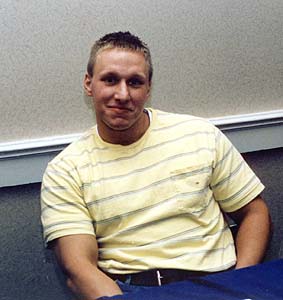 Ray Gordy at Wrestlecon in August.

SLAM! Wrestling spoke to Ray Gordy recently when he appeared at Wrestlecon with original Freebirds Michael Hayes, Buddy Roberts and Jimmy Garvin. The 24-year-old Gordy talked about what it was like growing up as the son of a star wrestler and top heel.

“At the time my dad lived in Dallas and I lived in Chattanooga so I really didn’t get to see him that much, because he was working out there and I was living at home. I would go visit him in the summers, and get to go on the road. I was probably six or seven when I first remember watching him wrestle. I went to the Sportatorium many times, and the TV tapings.”

“I enjoyed watching him but I was always concerned about him,” he continued. “It was neat having a famous dad but I had to put up with kids at school knowing who my dad was and hating him. They’d come to school and tell me ‘Oh, your dad cheated’, this, that and the other, and I didn’t like that too much. Other than that, it was pretty fun.”

Gordy began training to be a wrestler when he was 19, with his father and a cousin. He says his father was initially unsupportive of his decision. “He tried to discourage me at first, but then he realized that I was going to do it anyway, with or without him. After that he helped me out a lot. I’ve only been wrestling for about three years, since I was 21. I trained for two years before I actually started wrestling.”

Following in his father’s footsteps, Gordy went to Japan in November 2001 to work for Pro Wrestling NOAH, a mere four months after his dad’s death. “I lived over there and trained with the Japanese for six months and after that I was touring back and forth over there until I broke my foot in July of 2002. And I’ve not been back since. I’ve been rehabbing and getting a little work here and there with smaller promotions, just trying to get back into shape to go back over to Japan. I’m probably going back in the next month or so.”

Gordy says Japan was a whole other world. “The whole wrestling style is completely different, their training ethics are completely different. Six days a week for four, five hours a day, it’s ungodly training — really, really tough. The wrestling is a lot more physical over there as well and when you’re on tours, you work three days on, one day off, three days on, one day off. You’re working night in and night out, so it’s really good experience for anybody that’s trying to come up in this business, because over here, you’re lucky if you get to work two or three nights a week.”

Gordy is still very close to his father’s old teammates, Michael Hayes and Buddy Roberts. “They were over at the house all the time when I was younger, it was like I grew up with them.”

What was it like having Michael Hayes as part of the family? “It was just crazy, it was a lot of fun having him around back then. And now he takes care of me, he’s like a godfather to me, helps me out whenever I need it. It’s pretty cool having him there.”

Buddy Roberts said, “I’ve known Ray since he was a baby. I first teamed up with the Freebirds in Jackson, Mississippi, where Ray was born and I’ve been around him ever since. The boy’s very talented, and he’s been trained in Japan where his father went to wrestle quite often. And when you train in Japan, you know what you’re doing when you come out of there, so I expect to see good things come out of Ray. I was out with him last night, and I told him to be a good boy and not to cheat.”

Gordy also got a ringing endorsement at Wrestlecon from his father’s old nemesis, Kevin Von Erich, who told the crowd “This guy should be a superstar. He’s been in Japan, he’s been learning from the best, and I can tell he’s got Terry Gordy all over him. Terry Gordy was a superstar, he was smart, sharp, he was good on the mike, there was no reason for him not to go to the top and this kid right here is probably going to be one of the biggest stars in wrestling.”

Gordy was heartened, but also a little overwhelmed, by such public praise. “It felt really good to hear somebody like (Kevin) say that about me, but I’ve got big shoes to fill, I know that. But hopefully he’s right. I’m gonna give it everything I’ve got.”