In the ring, ‘The Raging Bull’ Manny Fernandez was tough, wild, bloody and unpredictable, a bane to both opponents and promoters. But now he’s taking on a multitude of health issues, some brought on by wrestling, others by his time fighting in Vietnam. Having just had surgery in late June, and now facing five more surgeries in the upcoming months, he’s realistic about his chances for survival, but hasn’t lost his will to fight.

“I just try to take it one day at a time. I know that I’ve got limited time according to my doctors,” Fernandez told SLAM! Wrestling from home in northern California on July 3rd. “I don’t believe in those bastards, and the first time I see one with a halo around his head, then I’ll fucking start believing.”

He had surgery on June 25 and got out June 28, having had a busted suture fixed and exploratory work done on his liver. “They wanted to see how bad the damage is, to assess what I need to do,” he said. “I knew almost two years ago that I had a bad liver from a wound that I got in Vietnam. I never paid attention to it during my 25 years of wrestling … It got real bad a year ago, started bleeding, waking up bleeding through the nose and mouth. I knew something was up.”

The Raging Bull has weighed his options, but keeps coming back to the experience of his frequent opponent and long-time friend Wahoo McDaniel, who died in April 2002 of complications from renal failure and diabetes. Fernandez, 48, is not expecting to ever receive a replacement liver; in fact, he’s decided against it. “I’ve been on a waiting list since they diagnosed me. It’s not something I’m going to do anyway. One of my best friends in the world, and one of my toughest competitors, Wahoo McDaniel, he waited all those years to get his kidneys. Then he got his kidney and three months later he was dead. There’s no guarantees in life. I’ve known that for a long time.”

A list of his upcoming surgeries is daunting, though covered by the government as a combat veteran. “Both my knees are going, my hip and my back’s real bad. What I mainly want to get back is both my hands. I’ve got that Carpal Tunnel Syndrome so severe that I lose the grip in my hands. So I’ve got that I’ve got that coming up on the 21st. Once I get my hands back, I told the doctors to tell me about my knee replacements, anything replaced in my back.”

Born in El Paso, Texas, Fernandez moved to near San Jose with his family as a child. He got involved in football and amateur wrestling, but grew disillusioned with the sports. Seeking new challenges, Fernandez joined the Navy to see the world. With the war in Vietnam coming towards its conclusion, Fernandez became a Navy S.E.A.L. and served his country. Upon his return to the U.S., he was disillusioned by the protests against the war.

“I’ve been diagnosed, since I’ve been going to treatments, with PTSD [post-traumatic stress disorder], which is basically combat disorder.,” he said. “Most of my anger came back from the days when we came home from Vietnam. We still had people protesting, calling us baby killers, losers and shit like that. I never really shed that and was always anger about that shit, and sick of people, the weak-ass bastards who didn’t have the balls to go and fight.”

His mother prodded him to do something with his talents. She worked the phones, calling college coaches to find a place for Manny on a football roster. One of the coaches from UCLA who knew of Fernandez had transferred to West Texas State, and brought him in.

Fernandez was an unknown quantity, an older student with a horrific stint in Vietnam buried within him. “Them guys went through hell with me! They thought I was an incoming freshman until they found out I could whip all their asses,” he recalled with a chuckle. “I got kicked out my first week of football camp, though, because I had a habit of sleeping with a gun under my pillow. They tried to dental floss my toes together and I came out with a gun in my hand, come out of that thing, you should have seen them guys drop to the ground. I had to explain to them that I was an ex-combat vet and there were still things that spooked me. Nobody messed with me after that though!”

West Texas State had an amazing past with pro wrestling as well, having had Terry and Dory Funk Jr., Dick Murdoch, Dusty Rhodes and Blackjack Mulligan go through its doors (and later Ted DiBiase). Fernandez fell into league with some of the pro wrestling elements, and it made sense for him to make the leap to the squared circle. 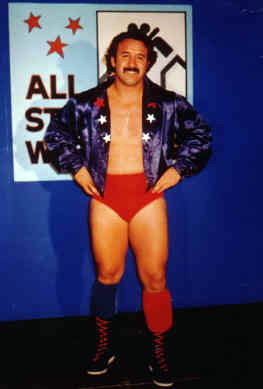 “I go back to the roots of where I was created, in my mind, it goes back to where I trained to become a Navy S.E.A.L. We became a brotherhood of guys who believed in one another. That happened to me a second time at West Texas. I met Murdoch and the two Funks and Mulligan. It was a brotherhood of men that believed in one another and used one another to make a great living,” he said, turning his attention to today’s pro wrestlers. “That’s just faded; it’s disappeared now. There ain’t the things, it’s just sad to watch the younger generation of wrestlers, they have nobody to look up to.”

He is proud of the hard road he had to take to succeed. “I got into this business because I had to prove myself to a bunch of people like Dick Murdoch, Terry and Dory Funk, Blackjack Mulligan, Adrian Adonis was a helluva damn shooter. Then when I went to Florida, I got to shoot with Karl Gotch, Jack and Jerry Brisco, Hiro Matsuda. I mean, I had to prove myself. How many of these idiots could even get into the ring with a Lou Thesz and try to keep up with him, even at his age when he was around, God bless his soul?” He is thankful for the men that took him under their wing, and “decided that I was a good guy because I wanted to fight everybody all the time.”

Over his 25-plus years in wrestling, Fernandez developed a reputation for toughness, unpredictability and wildness. Yet he could wrestle in wild, bloody hardcore matches with Terry Funk or Wahoo McDaniel one night, and face off against a wrestling virtuoso like Dory Funk Jr. the next without missing a beat. “It was total chaos with Terry and Dory Funk was that slow, deliberate beat the hell out of you thing. It was night and day. I went from going 100 miles an hour to two miles an hour,” he recalled.

Florida was definitely a favourite place for The Raging Bull to wrestle, primarily because of the promoter Eddie Graham. “He took very good care of me. I always respected him and looked up to him because he always told me I was going to be big in this business and make a lot of money. He always kept his word to me. So I always loved to work for him.”

On many occasions, Fernandez found himself going out of his way to work in a promotion where Dusty Rhodes was booking. “Anywhere that Dusty would go was alright with me because I knew that I was going to be, once Dusty would let me go out, and would say, ‘Hey, I need you back’ I would be very well taken care of, and I knew I was coming in to help out the territory get hot. So anywhere that Dusty was a booker, that’s where I would end up being. I was happy because he was there.”

Fernandez had a well-earned reputation as a bleeder as well. “I could bleed, brother! I didn’t mind bleeding every night,” he said. “If you think about what’s going on now, with some of these idiot organizations, Combat Zone, and everything, they have to go to extremes to prove themselves. Hell, back in my day, I didn’t do the blade as much as hardway. Most of the time, I did hardway. I didn’t care. It’s better that way. I didn’t have to worry about swallowing something or cutting somebody else.”

He has well-developed rants on the state of wrestling today, especially hardcore matches. “Barbed wire matches were cool to me when me and Killer Brooks had them in San Antonio because the barbed wire was used as an obstacle instead of the tool to get yourself over. Now they do the stupid thumbtacks. Not that I haven’t done these stupid matches just to have fun. To me, it was fun to have hardcore matches. It was always a hardcore match in Florida against Terry Funk. Me and him beating the living crap out of each other.”

Over the years, Fernandez worked across North America, and made countless trips to Japan. Many fans know him best for his time in the NWA as Ted Turner’s TBS SuperStation grew and broadcast matches to a wider audience. “We made great money with Ted Turner. I was making half a million a year,” he said. The Raging Bull was teamed with Ravishing Rick Rude for a lengthy reign with the NWA World tag titles. His former arch-enemy Paul Jones served as the team’s manager. “When I was in the later stages of my career with Rude, I didn’t care for the belts. We had them for so long, after a while, I just didn’t care to wear them. I always got fined or got in trouble, which was a part of my career. I always gave Dusty a headache. I always kept Dusty on his toes.”

Rhodes wasn’t the only behind-the-scenes figure to have difficulty with Fernandez. While in the NWA/WCW, Fernandez was pressured to give up his lucrative Japan deal and stay exclusively with the Atlanta-based promotion. “I told him to take his contract and stick it up his ass. That was me. All promoters feared me. Wrestlers feared me. They didn’t want to get into ring with me. There were very few, the guys I had fun with in the ring that were physical, and I knew were going to be physical, there’s a handful of guys that I would consider even tough in this business for me to work with.”

Having spent the last few years doing the occasional indie appearance and helping to train a few wrestlers here and there, Fernandez has come to grips with his reputation. “If you believe the myth of me in North Carolina, I’m tougher than King Kong”

He plans on returning to North Carolina, where he has four- and five-year-old daughters, once the series of surgeries are complete. (According to Fernandez, the Veteran’s Hospitals in California are superior to those in North Carolina.)

In the meantime, he has enjoyed the calls from old friends like George ‘The Animal’ Steele, the Road Warriors, the Guerreros, Greg ‘The Hammer’ Valentine and Dewey Robertson. Fernandez knows that his old running mates are concerned for him, but he refuses to have any unrealistic belief of his immediate future. “My liver was [the doctors] main concern … I didn’t go in hoping for a miracle. I don’t care what happens now. I’m going to enjoy the rest of my life and that’s it.”