Melbourne, Australia – Despite the brain tumour and the terrible condition of his neck, ‘Canadian Hellraiser’ Jason Helton just had to get in the ring one last time, to feel the rush from the crowd and the adrenaline pumping.

So last Saturday, the 33-year-old Calgary native, who now calls New South Wales, Australia home, was in the ring for his retirement match. Helton lost the ‘retirement match’ to Australian wrestling icon Lobo, but it gave him the finality he needed to his career.

“I didn’t want to go out with a note on a webpage saying, ‘see you later,'” Helton told SLAM! Wrestling. “It’s kinda like a sense of closure thing. I didn’t like the way that I just said I was going to retire; it’s just hard to not step out in front of the fans and do what Stu [Hart] taught me all those years ago, and so I thought I’d have one more to at least go out with a little bit of style.” 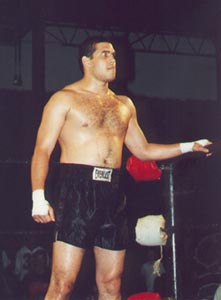 The Dungeon-trained Helton, a 14-year veteran in professional wrestling who has wrestled for such high-calibre promotions as Stampede Wrestling, Extreme Championship Wrestling (ECW), and World Wrestling Entertainment (WWE), initially retired in May after a distressing period in which he aggravated an old neck injury and was diagnosed with a brain tumour in the same week. Currently he’s on a 90-day waiting list to have the tumour removed.

The 6-foot-2, 225-pound Helton admitted that he didn’t cope well with his problems in the ensuing months. “Jim Beam and I became good friends again,” he revealed. “I’ve had a bad month of not being too happy with anything. But, I figure, what can you do? I’ve had other problems before and I’ll deal with this one as best I can. Try and do better than I have up until now anyway (laughs).”

Despite a disappointing turnout of approximately 100 patrons, the two combatants pulled out all stops in what could only be described as a classic ‘old school’ encounter in the main event of Professional Championship Wrestling’s (PCW) annual Redemption show. The finish came after almost 20 minutes when Lobo used the ropes to his advantage and reversed a half-nelson type manoeuvre into an inverted bridge pinfall attempt for the victory.

Helton remembered the brilliant displays of wrestling he and Lobo have produced in recent times, and also a pact they formed two years ago, which stipulated if either of them retired the other person would be their last match and vice-versa. Hence, the choice of his opponent was easy. Helton also noted, that due to his brain tumour, “Lobo was the only guy willing to wrestle me right now, so that’s another good reason why it was him and nobody else.”

Unlike the last retirement, Helton asserted to SLAM! Wrestling this one is legitimate. “As much as I’d like to think there’s a chance for me to come back and wrestle someday, there really is none,” he said. “I’m on the 90-day waiting list to have surgery and nobody else seems willing to book me between now and then. I’ll be retired here [in Melbourne], so this will be it. This isn’t like one of those wrestling angles like Ric Flair does where he retires then comes back two months later. This one’s forever.”

Throughout his career Helton has traded moves with some of the biggest names in wrestling, including matches with The Undertaker, the late Yokozuna, and John ‘The Berzerker’ Nord on WWE House Shows in Canada in the early 1990s. He furthermore was taught the ins and outs of the wrestling business by Canadian legend Gerry Morrow while wrestling for Stampede Wrestling in the late 1980s, and had his neck infamously broken by a Tazz suplex in ECW in 1996.

Out of everything he’s ever accomplished in the wrestling business, Helton explained the biggest highlight from his career was “Hanging with the boys.” He continued. “Everybody always says the boys become your family away from your family and that’s what these people are. I get along with Lobo better than I get along with pretty much anyone else I know. Wherever I go they’re (the wrestlers) like my family to me. And it’s really hard to say goodbye to all of them, but without the travelling that I get to do with wrestling… I’m not gonna get back too often.”

“I’ll also miss just hearing the fans yell out at you. Call you all kinds of nasty names. I’m gonna miss four-year-old kids using language that I wouldn’t use (laughs). That was always a highlight to me. To this night I can block out pretty much anything else and keep my mind on it, but when you get some little four-year-old girl standing up and calling you an F’N C, it’s like, ‘Wow, I’m doing something good here.’ Well that, and the bad parenting that has been allowed (laughs)… Everything about wrestling, I’m gonna miss it.”

Helton stated he didn’t do anything “too regretful” during the course of his career, although he would regret not being able to assist the emerging wrestling talent in Australia to achieve their goals in the business.

Because of the nature of the pending surgery, Helton is unsure whether he’ll remain involved in the wrestling industry in the future. “It depends on how the surgery goes,” he told SLAM! Wrestling. “I don’t even know if I’m going to be here very much longer. If I can be involved in wrestling and they’ll have me I’ll try to do something. But that’s all in the air right now. We’ll see how it goes.”

Mike ‘Kryptonite’ Altamura had the pleasure of witnessing Jason Helton wrestle on over a dozen occasions. He is one of the true gentleman of the wrasslin’ game. Thank you for the memories, Jason.

Jason Helton: Raising hell Down Under