The premise here is that WWE Crush Hour is a television show adapted by Vinnie Mac for his new program scheduling, now that he has completely taken over television (sounds a bit Turneresque). 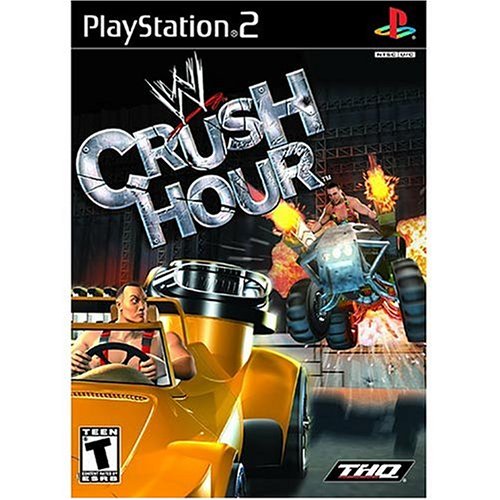 The game pits WWE stars against each other in various arenas and game-types, including combat modes and a “capture the flag” type game. The games themselves are fairly good, and offer a bit of variety, rather than the standard “shoot me before I shoot you” tank games that some gamers will remember from the old days of Atari.

There are two ways to play: single events (including multi-player options) and a season mode. The season mode is somewhat passable, as you go through the various game options. Sticking with the regular games will leave you with enough of a variety, unless you are really focused on unlocking all of the available cars.

THQ does an awesome job in this department. The game is very easy to control, with the most common controls being acceleration, directional controls and your weapon. There are other controls for turbo boosts and “special” attacks, each of which are very straightforward. THQ deserves a lot of credit for being able to put together an engine that allows for very easy pick-up-and-play capabilities.

Graphically speaking, the game is stellar. There is some very smooth animation, and the arenas and cars are highly detailed. The explosions look very cool nd have some pretty good detail.

Sound-wise, however, Crush Hour is solid but not spectacular. The announcing by Jim Ross becomes repetitive quite quickly, and before long gets really annoying. The sound is a necessary evil, however, as you need to be able to hear when competitors are closing in.

It’s a shame that a good game like  will not have as many sales as it rightly should have. The game is an all-around solid effort, but one that will be hampered by a wrestling audience that will not be interested in car games, and driving game enthusiasts who will stay away from a wrestling-associated game. Cross-over games only work if gamers are extremely familiar with characters such as Mario or Sonic the Hedgehog.

Bottom line, from a gamer stand-point, is that this game is solid enough as a party-style, multiplayer game and is worth at least a rental or two. From a wrestling fan standpoint, it’s hard to recommend picking it up.