La Felina –‘Queen of the Cats’

By DOUG CHAMBERS – For SLAM! Wrestling

One of the hottest new lady wrestlers to emerge on the wrestling scene in quite some time, La Felina–Queen of the Cats, has surfaced in Ontario’s Apocalypse Wrestling Federation and she will be in action this Sunday when the AWF presents a 9 match card at the Birchmount (462 Birchmount Rd. @ Danforth Rd.) in Toronto at 4 PM.

La Felina gets an overwhelming response from the fans whenever she faces an opponent in ladies action or in mixed tag team matches. Ironically, La Felina made her debut one year ago in Toronto as a masked heel but was soon earning respect as both an acrobatic, and a skilled mat wrestler. 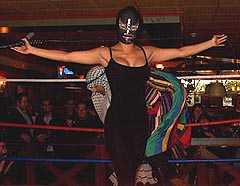 However, when she lost her mask in a hair vs. mask match this Asian beauty quickly became a huge fan favourite and her roughhouse tactics were quickly forgiven.

La Felina, was even voted wrestling Diva of the year by Apocalypse Wrestling Federation Internet fans on the AWF’s web site, and she won the contest by a wide margin.

This dynamic grappler is a Toronto native who was taught to wrestle by respected trainer Ron Hutchison, and he bragged that she picked up the moves, tactics, and psychology as quickly as any student he has ever trained; male or female.

La Felina is a fitness fanatic who works out constantly and is very conscious of both her diet and health, and it shows in both her great shape and stamina in the ring.

Before breaking into wrestling she studied kinesiology and nutrition at York University and Ryerson University in Toronto. She has also found time to do some modelling and TV commercials as well as appear in the AWF 2002 calendar.

What did her family think of her decision to train for wrestling after all of her efforts at getting a higher education?

“They thought I was crazy,” she admits with a laugh. “But they know how much this means to me so they totally support me.” 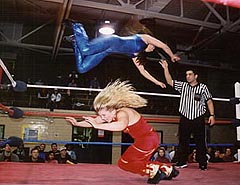 La Felina wrestles for the Apocalypse Wrestling Federation in Ontario and continues to hone her skills in the gym. She has also wrestled at the Winter Carnival in Lorrainville, Quebec and has crossed the border to appear in Michigan and Ohio. She is currently scheduled to appear for the Apocalypse Wrestling Federation on Sun. April 28th at the Birchmount in Toronto, Sun. May 5th at the Cowboy Tavern in Brantford and on Sun. May 19th at the Portly Piper Plaza in Ajax, Ont.

With rumours of a separate AWF ladies division soon to be up and running, and several new lady hopefuls signed up for training, La Felina is in a good position to make a move toward the top of her profession.