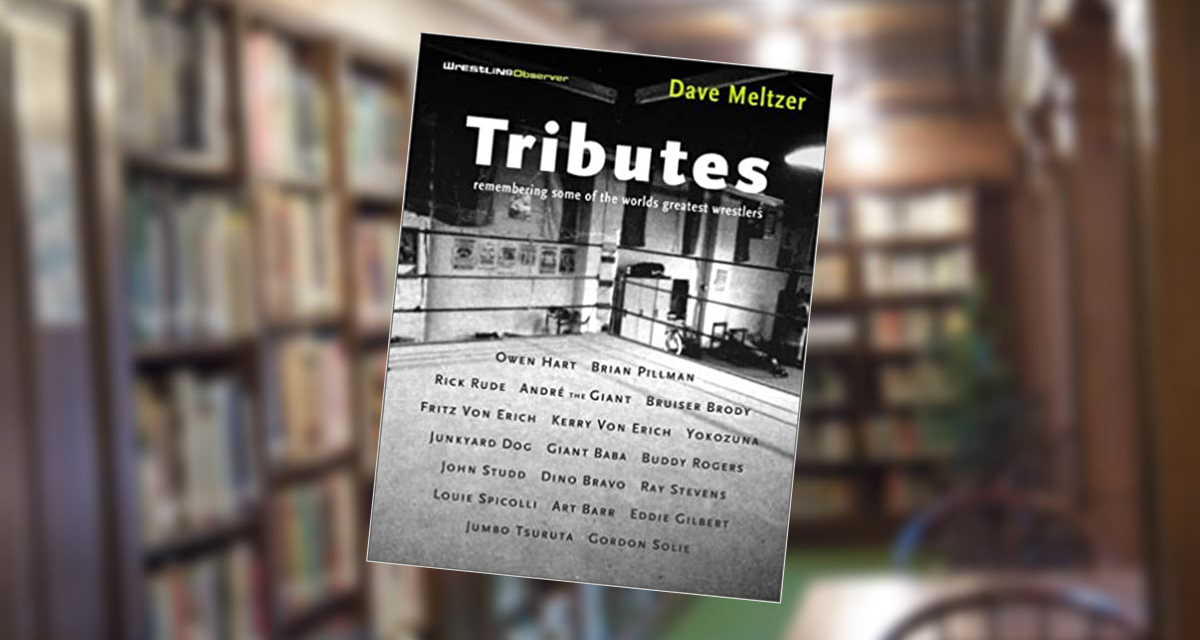 A small confession, if I may: I am addicted to Dave Meltzer’s Wrestling Observer newsletter.

Every Monday morning, I sit impatiently in my living room looking out the window, waiting for the postman to appear with the latest issue so that I can quickly dart out to the porch and snatch it from his clutches.

Once I have it, I turn off the ringer on the phone, brew a pot of coffee, find a comfortable chair and read all 18 pages, front to back, in one sitting. This has become a weekly ritual for me for the past seven years.

It has been said so many times that it has become a cliche but it bears repeating here once more: the Wrestling Observer is THE bible of the wrestling industry.

A trade magazine of sorts, the Observer is to wrestling what Variety is to Hollywood. It is required reading for anybody who hopes to have even the slightest understanding of wrestling and its rich history.

So, you can imagine my sheer ecstasy with the release of Meltzer’s Tributes: Remembering Some of the World’s Greatest Wrestlers, from Stewart House Press.

Since starting the Observer in 1982, Meltzer has pioneered and changed the face of wrestling journalism. In the ’80s and ’90s when wrestling’s powerbrokers kept a tight lid on the business and fought to the end to preserve its code of silence, Meltzer openly broke kayfabe with the Observer, reporting about the state of the industry in a frank and honest fashion, shattering the illusion that the sport was ‘real’.

In this day and age of the Internet, we often take for granted how open wrestling is discussed among reporters, fans and those within the industry. Needless to say, none of this would have happened without the groundbreaking work of Meltzer.

The Observer has reported on so many important stories in the past, from the tragic downfall of the Von Erich family, the ascension of the WWF in the mid-’80s, the explosion of pay-per-view, all the while tracking developing trends in the business.

The July 16, 1988 issue dealing with the murder of Bruiser Brody in Puerto Rico set a new standard of excellence in wrestling journalism, serving as a blueprint and design for future wrestling journalists, myself included, to follow.

Over the past few years, Meltzer has become famous for his eulogy pieces; long, storied accounts on the career of a wrestler who recently passed away. Enlightening and entertaining to read, these tribute articles provide a glimpse into the life and times of one of wrestling’s biggest stars and open a window for us to peer through and discover wrestling’s past.

I must confess a purely subconscious ghoulish delight whenever someone in wrestling passes away, knowing full well that when I tread out to the mailbox Monday morning, the new issue of the Observer will have a thorough and complete story on that person, perfectly encapsulating their career.

First time readers of Meltzer’s work will simply be amazed. What separates him from the rest of us is his unique ability to perfectly analyze and dissect events and the actions of those in the business, placing them within a historical context and framework.

Meltzer sees past the con games, the lies and the scams, reporting the stark reality of the business in his constant pursuit of the truth. His is a unique gift, writing with a beguiling grace and eloquence, painting wonderful word pictures for the reader as he articulates the life details of wrestling’s most important figures.

To wit, a brief passage on his epic story dealing with the death of Bruiser Brody:

“He was the victim of several stab wounds suffered at the hands of another wrestler in the dressing room the previous night before a card in Juan Lobriel Stadium in Bayamon, nine miles outside of San Juan. The last of the wrestling outlaws had been put down for the count. But this was no angle. And there would be no rematch.”

Such economic and efficient use of the English language, it’s passages like this one that resonates with the reader. Meltzer brings wrestling history alive from the dead, turning it from a cold, sterile bunch of facts into a living and breathing organism.

Tributes‘ strikingly descriptive and evocative prose is a hallmark of Meltzer’s writing style, effortlessly drawing readers in and barraging their senses with lively imagery.

Equally striking are the vibrant photos found throughout the book, beautifully complementing the text. Seeing old black and white pictures of Hart during his rookie year, shots of a youthful Brody and lifelike photos of Barr in his prime in Mexico as the ‘Love Machine’ bring these fallen stars back to life, so stunningly surreal are the images.

The forward is written by Jeff Marek of Live Audio Wrestling, who eloquently sets the table for the main text of the book when he writes:

“In a world where ‘truth’ is a bad word and performers are encouraged to ignore and downplay the reality of what’s going on around them, the truth is the most fascinating and revealing part of these people’s lives. There is no wrestling story line that can compare to what you’re about to read.”

Over the years, detractors have heaped a mountain of criticism towards Meltzer, labeling him a morbid ghoul who seems obsessed with deceased wrestlers and analyzing the startling death rate in wrestling to the point of revulsion. This book, they argue, further points to Meltzer’s morose fascination with death.

Nothing could be further from the truth.

Tributes is not about death, but rather a celebration of life, paying homage to those who gave their lives, literally, to this business. It restores honour to those who were robbed of it following their deaths as they were cruelly tossed aside on the scrap heap of forgotten souls by a cold and indifferent industry.

Meltzer looks beyond the macabre body count of dead wrestlers that has piled up over the past twenty years, striving to put their careers and lives in proper perspective and giving them dignity while at the same time issuing a stern warning to the business to mend its ways before it’s too late.

History. It’s a seminal theme in Tributes as Meltzer navigates through the murky waters of wrestling’s past, plotting out on a map for the reader just exactly where this industry is headed. By recognizing that wrestling’s past, present and future are inextricably tied together and not exclusive of each other, Meltzer provides a detailed and analytical perspective on the sport, anticipating before everybody else how wrestling will evolve.

The relevance and significance of what Meltzer has achieved with this book, and the Wrestling Observer for that matter, is simply astonishing. Not only is Tributes an authoritative record on some of the biggest stars that ever graced this sport, but it also stands as one of the most historically important documents ever published about wrestling.

Meltzer follows through with Tributes II