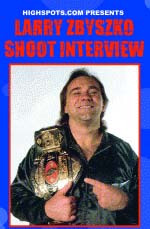 Larry Zbyszko is the latest wrestler to look the camera squarely in the eye and unflinchingly answer questions about his wrestling career in Highspots’ “Larry Zbyszko Shoot Interview (2001)”.

For those of you unfamiliar with the premise of the shoot interview video concept, allow me to explain.

The subject is interviewed on camera in a one-on-one setting, fielding ‘insider’ questions from the interviewer about his wrestling career. The exchange is completely candid and open, with no kayfabe answers. The forum is friendly and informal, allowing the wrestler to open up and share memories and stories from his life on the road. Interspersed between the questions and answers is video footage of matches and TV interviews from different points in the wrestler’s career.

The Larry Zbyszko tape shows ‘The Living Legend’ in a new light, and is another in a long line of shoot interviews conducted by Highspots (previous interviews have included Ricky Morton, Ivan Koloff, Buddy Landell and Bobby Eaton).

What’s refreshing about this shoot interview and what sets it apart from previous ones is the tone and flow of the questions and answers. You don’t get the feeling that you’re watching an interview, but instead a chat among old friends. The interview is almost conversational in form.

One thing is clear from watching the tape and that is Zbyszko’s pure love for the business. You can clearly see the smile etched on his face and feel the joy in his voice when he talks about his career and the wrestling business. Each old road story, each explanation of past angles and matches and each opinion he gives on former colleagues are delivered in such a loving manner.

Zbyszko regales us with stories of how he got started in the business; how he trained under Bruno Sammartino’s watchful eye and became his real-life protégé; his heel turn and feud with Sammartino; his days in the NWA working for Jim Crockett Jr.; winning the AWA World title and his stint in WCW as a wrestler and broadcaster.

He offers his views on former tag partners Tony Garea and Arn Anderson, former bosses like Vince McMahon Sr. and Verne Gagne and old friends Ivan Putski, Andre the Giant and Haystacks Calhoun, all the while providing a unique glimpse into the WWWF when Vince Sr. ran the show.

He even gives us new insight into the infamous Baby Doll-Dusty Rhodes photo angle. Again, some explanation is needed: In 1988, Zbyszko was being managed by valet Baby Doll in Crockett’s territory. They booked an angle where Baby Doll came out on TBS and said she had damaging photos of Dusty Rhodes that would expose him and end his career. Rhodes comes out and see the photos, nearly has a heart-attack and Baby Doll reveals that she would show everybody the photos in the coming weeks.

Strangely, it doesn’t come to pass as the angle was totally dropped and never mentioned again. Now, that may sound like no big deal in this day and age where angles are forgotten on a whim, but back then this was a major deal and completely unheard of, especially because Crockett’s territory was noted for its great booking.

The angle has taken on such legendary status that longtime hardcore fans always bring it up whenever an angle today is never played out to a conclusion and just dropped by the promotion.

Anyway, Zbyszko explains why the angle was dropped — I won’t spoil it for those of you who want to buy the tape and find out for yourselves — but he doesn’t tell us how the angle was supposed to pan out. What did the photos show? How were they going to blackmail Rhodes? Where was the angle going to go? All questions that are not answered, presumably because a) Zbyszko doesn’t know or b) the interviewer doesn’t think to ask.

Like any other wrestling interview, there is plenty of self-promotion. Zbyszko actually tries to convince us that the “Larry sucks” chant fans barraged him with after turning on Sammartino was the first time a wrestling crowd did such a thing — yeah, right! He also takes credit for increasing the buyrates for two WCW pay-per-view events he appeared on wrestling Eric Bischoff and Scott Hall. As if!

The tape is complimented with a healthy dose of matches and interviews from Zbyszko’s career, including the famous Shea Stadium cage match against Bruno Sammartino in 1980 and the heel-turn angle that set it up.

Looking back at that match (Zbyszko turns on Sammartino several minutes into the match after various attempts to beat Bruno with scientific moves doesn’t work) shows just how much the business has changed. It was a simple match that told a story and set up one of the biggest money feuds in the WWF’s history.

Two simple swings of a metal chair to the back of Bruno’s head (back then hitting a guy with a chair still meant something), and Zbyszko was transformed from fair-haired, white-meat babyface into a brash, cocky heel that fans loved to hate. As soon as Zbyszko turns on his mentor, it’s as if he committed bloody murder; the arena turns into pure bedlam and the crowd is whipped into a frenzy as crazed fans nearly riot trying to get at Zbyszko as he leaves the ring.

The footage of Zbyszko and Garea winning the WWWF World Tag titles from The Lumberjacks is almost eerie if for no other reason than to hear Sammartino and Vince McMahon Jr., sworn enemies in real life now, provide the commentary for the match.

There are other highlights as well. Zbyszko talks about the storyline in the NWA Georgia territory when he bought the NWA National title from Killer Brooks (later copied by the WWF in 1988 with the famous Ted DiBiase angle). His take on the demise of WCW is pretty bang-on, as his perspective on how the business has evolved and changed.

Zbyszko proves himself to be a student of the game with his insightful and thoughtful analysis, betraying the arrogant and loudmouth character he played for the better part of his career. One gets the feeling that he could have been a half decent booker in his day if he was given the chance.

Overall, ‘The Larry Zbyszko Shoot Interview’ is four hours well spent and is a wise investment for anybody interested in WWF history prior to Vince Jr. coming on the scene.