He made an appearance for a closed autograph session at the Toronto Sun, in conjunction with the 30th anniversary celebration of the newspaper.

Booker, who came into the WWF as part of the “WCW Invasion”, says that the angle has had problems because WCW marquee performers were not a part of the invasion. “A lot of guys weren’t there to make it all happen,” he said, noting wrestlers such as Sting and Bill Goldberg who did not sign with the WWF after it took over WCW in March.

The angle, which many have declared a failure, is set to conclude at the Survivor Series pay-per-view later this month. “Hopefully, after a couple weeks here it will be all over with,” Booker said. 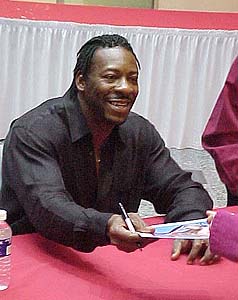 Booker T signs an autograph during a private meet and greet at the Toronto Sun to celebrate the Sun’s 30th anniversary. — Photo by Greg Oliver

When Booker first appeared in the WWF, he was greeted warmly, with cheers from the fans. He feels that there was no bias toward him upon his arrival to the WWF. “I feel like they kept up with my past,” he said. “I feel like they know what Booker T has done for the sport of professional wrestling.”

While Booker admits that the fans have “turned their backs” on him since his arrival, he said that the important thing is that he gets a reaction from the crowd. “In this game, if they love you it’s a good thing, if they love to hate you it’s just as good.”

Booker began his career in a tag team with his brother, Stevie Ray. The two won multiple tag team titles in WCW as Harlem Heat, before going separate ways. Stevie Ray has since retired, but Booker would not rule out his brother joining the WWF. “He’s just enjoying his time off,” Booker says of his older brother. “He’s raising his little girl and he’s just having fun doing that right now. I’d never say never as far as him showing up in the WWF.”