One year after the split, All Japan is alive and well

It was the biggest news story in all of professional wrestling last year.

When All Japan Pro Wrestling booker and President Mitsuharu Misawa left the promotion and took the majority of its stars with him to form his own Pro Wrestling NOAH group, the landscape and fabric of Japanese professional wrestling was forever changed.

With a depleted talent roster and in deep financial trouble, All Japan appeared to be doomed. Many journalists and critics were convinced All Japan and its owner Motoko Baba would not make it to the end of the year and be forced to fold.

It’s now a year later and both Mrs. Baba and All Japan are still around.

So how did she manage to defy the odds?

According to one All Japan star, the boys in the locker room came together to try and make it work.

“Morale is pretty good because everyone’s trying to pull together and really make sure it is a success,” Johnny Smith told SLAM! Wrestling last week from his home in Calgary. “We’re going through a rebuilding process and bringing in different talented Japanese wrestlers. We just have to keep plugging away and see how that goes.”

Smith, a regular with All Japan since his first tour with the company in February of 1989, admitted that his colleagues have much more optimism now than a year ago after the Misawa split.

“Everyone’s taking it one step at a time. We’re not looking at what’s going to be happening in five years. There’s more of a relaxed attitude once all the news had sunken in and were told it was going to be a go.”

All Japan gained some much needed momentum back in June when it crowned New Japan Pro Wrestling star Keiji Mutoh (AKA The Great Muta) as its Triple Crown Heavyweight champion. Mutoh became the first star from a rival organization to hold All Japan’s most prestigious title after defeating former champion Genichiro Tenryu.

Smith feels All Japan’s decision to work in conjunction with New Japan and allow Mutoh to hold its version of the world title was a smart move.

“I think just having him associated with the company is good publicity.”

Smith is a big admirer of Mutoh’s ring work and is impressed with his personal character, especially in light of the fact the Japanese veteran is wrestling with severe pain in his knees from years of grueling punishment in the ring.

“What a performer Mutoh is. Absolutely fantastic. You see him backstage and he’s kind of (hobbling) around on his bad knees but once he gets into the ring he turns it on and it’s as if there’s nothing wrong with him.”

One business decision that All Japan made since the split with Misawa was to cut back on the number of shows it promotes during the year. Smith thinks the reduced schedule has been a blessing in disguise for the roster. 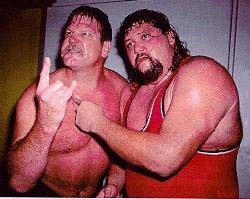 “They’ve cut some of the tours down and they’re not quite as long as what they were so we’ve been having a bit of extra time off between tours which gives your body a chance to recover fully before you’re back on the next tour.”

One person who didn’t think All Japan would close up shop after the defection of Misawa was former Triple Crown champion and All Japan legend Stan Hansen.

Hansen, a veteran of 27 years who competed on over 120 All Japan tours, says Motoko Baba, the wife of deceased All Japan founder Giant Baba, is the reason why the promotion is still alive today.

“I’m not surprised (All Japan hasn’t folded),” stated Hansen. “Mrs. Baba is someone that when she decides she’s going to stop it’ll be over. She’s doing it out of memory to Baba and all the hard years and hard work and dedication he put into the business. I’m sure there might come time when she’ll say ‘why do this?’ But until she decides to do that I think All Japan will be around.”