Ups and downs of Ontario up-and-comers

When most fans think of professional wrestlers, they automatically think of their favourite WWF (and now WCW and ECW) superstars. Little thought is given to the independent ranks, where hundreds of gifted men and women toil at their task, anxiously awaiting their chance at fame and fortune; Where crowds of 500 people at county fairs and community centres are a reality, and a main event at WrestleMania in front of a sold-out crowd is the ever-elusive brass ring. 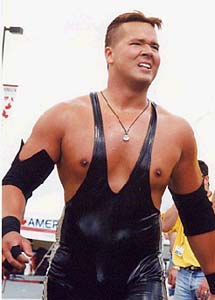 SLAM! Wrestling recently talked with some rising stars on the independent Canadian wrestling circuit at a Border City Wrestling show near Windsor, ON, to talk about their struggles, their hopes, and life on the indy scene.

It’s a life that “Danger Boy” Derek Wylde knows won’t be an easy one. “It’s very frustrating. I’ve invested so much of my life into it — I’ve been doing it steady for the past five years now. I don’t know what keeps me going sometimes. I’m broke because of wrestling — I spend so much on a gym memberships, gimmicks, travel, and (wrestling) doesn’t pay the bills. My $50 payoff isn’t going to get me through my monthly expenses. But, it’s the choice I made, the life I chose, and I accept it.”

Wylde’s sentiments are echoed by many of his peers, although not all of them have been slogging away at it for as long. The Hacker, for instance, had his first match not even one full year ago. For him, blending his wrestling career in with his University studying is proving to be no easy task. “It’s tough. Driving, schooling, training, it’s life on the run. I have NO social life to speak of. Sometimes I ask myself if there’s anything better to do out there.”

But ‘this’ isn’t really it. Not when fame and fortune is only a contract away. And especially not when, as in the case of El Tornado, they have already had a taste of it. “I’ve done some shows for the WWF, a RAW and a Smackdown! Unfortunately, those opportunities are few and far between. In the meantime, indy’s are the best training ground. You learn more on the indy circuit than anywhere else. You learn how to work the crowds, you learn psychology from the bigger names, you learn how to work with a variety of guys.”

Mike Legacy, another Canadian youngster, agrees that touring on the independent circuit is a necessity, both from the perspective of learning, as well as in making yourself into a recognizable name. “If you don’t wrestle, nobody will be able to notice you. The more matches you have, the better chance you’ll have of getting ahead. Sure, it isn’t the same as when you’re wrestling in front of 20,000 people on a nightly basis… but that comes in time. It could be that one match that gets you the chance you need.” 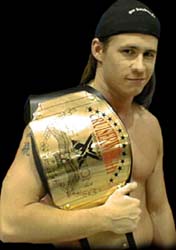 It’s a chance that Larry Destiny hopes will come soon. His first match was in 1996, and since then has kept focused on his ultimate career goal: the WWF. “The goal is always the contract… to work for Vince McMahon.” He realizes, though, that despite all of his hard work, nothing is guaranteed.

“It’s all about whether you can fill a spot they’re looking to fill. If they’re looking for a five-foot guy with blond hair, if you fit the look, if you can work all right, and can talk, then they’ll come for you. Never mind that there are 20 other guys with the same skills who just don’t fit the look. In the meantime, you just have to avoid getting injured. If you’re injured and can’t work — especially if they come looking for you right then — then you’ve got nothing.”

Remaining injury-free is imperative for the independent wrestler, a lesson learned by Mike Legacy not so long ago. “I did some WCW tapings, and did some work for the WWF. Shortly after that, I had a neck injury and was out for a year and a half. Right now, I’m working to get back to the big leagues.”

The fear of injury can’t stop you from reaching your goals, though, says Hacker. “There’s always a danger involved, and that’s always something in the back of your mind. But if that’s going to stop you, you’re in the wrong business.”

You’re also in the wrong business if you think you’re guaranteed success. Unfortunately, in the wrestling industry, opportunities aren’t handed out every day — they are a combination of timing, patience, and luck. For every Kurt Angle or Booker T in the ring, there are a hundred guys like Otis Apollo or Gutter waiting their turn. Every indy team like Jack Damage and Tyson Dux are hoping to be the next Dudley Boyz.

All they need is the chance, says Wylde. “I think I’m ready for the WWF. I have a good look, I have charisma, I have good moves, and I put it together well.” El Tornado concurs, noting that many of his peers could perform on a worldwide stage if they were asked to. “The Canadian indy scene is very healthy. A lot of these guys could be in the WWF tomorrow, they have that kind of skill.”

Sadly, not all of them will get that chance. It’s a harsh reality that, sooner or later, everyone on the indy scene must come to grips with.

Some, like Mike Legacy, already have. “I have this goal, that I make it by 30 — three more years. If nothing happens by then… well, you can only do the independent scene so long. You eventually have to look at yourself and ask ‘what do you want to do with the rest of your life?’ Fortunately, I have an education to fall back on. If need be afterwards, I can get a real job.”