Chuck Molnar was at Hamilton Central Technical School at the same time as Murphy, and helped ‘Murph’, as his friends called his, follow him into pro wrestling. He recalled one particular joke that Murphy probably played on many people. 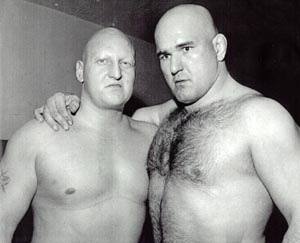 “I will never forget when he and I were riding together up north, he said ‘Chuck, could I borrow your comb?’ Out came my comb, handing it to him, then it struck me that he was bald as a billiard ball. The laughs lasted till the end of the trip,” Molnar explained.

Skull Murphy was easily one of the more memorable heels of the 1950s and 1960s. His unique look — completely hairless — stood out, but he was great at getting the crowd riled up, scaring the young ones, angering the elders. Molnar recalled Murphy as “very aggressive and nasty … he demanded a lot of attention from his opponents, always coming at you.”

He wrestled around the world, and stands out particularly as the tag team partner of Brute Bernard, another bald Canadian behemoth.

Hamilton’s Billy Red Lyons started training for wrestling about the same time as Murphy. “We had a lot of good times together, Skull and I,” Lyons recalled.

They first met at the Hamilton Jewish YMCA, where famed trainer Jimmy ‘Red’ Simms would come down during his lunch break and instruct the wannabe wrestlers. Simms also booked Welland, Ontario and both Lyons and Murphy got their “feet wet” wrestling there. John Foti and Jerry Aitken (Jerry London) were two other contemporaries. “He was a natural and he was a great guy,” said Lyons.

Molnar got Murphy out of the southern Ontario circuit. “I was working for Larry Kasaboski in North Bay and I told Larry I was going home for a week. He then asked if I would get in touch with Red Simms and see if he had a good looking babyface and a heel I could bring back with me. Well I called him and he asked me to meet him at the YMCA one afternoon as he was working out about a dozen or so boys. I spotted Skull right away and he looked great. I picked him, and then picked out a good looking babyface type who worked quite well.” (That babyface was Earl Patrick Freeman, aka Paddy Ryan.)

Besides Ontario, Murphy made it big in Detroit in the early 1960s, and was one of the elite down in Jim Barnett’s Australian promotion. Bernard and Murphy were recognized as world tag team champs both in Florida and Australia, and held the WWWF tag belts in 1963, beating Buddy Austin & The Great Scott and losing to Killer Kowalski and Gorilla Monson. 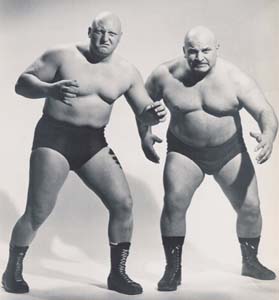 Also in the WWWF, Murphy was a challenger to Bruno Sammartino soon after Bruno won his first World Title from Buddy Rogers in 1963.

Part of Skull’s success was the fact that he “took terrific bumps”, explained former Australian promoter Jim Barnett. Plus, Murphy was a company man, whether it was in New York, Atlanta or Australia. “He was very much for the promotion and I had some very strict rules,” Barnett said. “They had to wear coats and ties on aeroplanes. They couldn’t drink, they had to be gentlemen, they had to pay their bills. There were a lot of rules and I wanted to be sure I had a promotion I could be proud of and the people could be proud of.”

Chicago’s Moose Cholak roomed with Murphy on a couple of tours of Japan. “Me and him were pretty close,” Cholak recalled.

Cholak said that Skull’s hairlessness really got to him sometimes. “That really bothered him. He used to have one or two hairs grow on his face that you couldn’t see, and he’d buy a razor blade and soap and shave. Everyday, every morning he’d shave — and you couldn’t see it!”

Moose shared a couple of funny stories about Skull Murphy. Once, they were riding the train in Japan. The train had to keep the windows open because passengers would relieve themselves wherever they wanted. Murphy couldn’t stand the smell. “He used to roll on the floor because he couldn’t take it, because it would take his breath away. He would gag and gag, we almost had to send him back home because he couldn’t take that smell.”

The other story, Cholak wasn’t there for, but heard about in the dressing room. “He was wrestling in New York, and he had $20,000 in cash in one of those money bags,” Cholak said. Apparently, the promoter had owed him a lot of money. Murphy and his wife went out for dinner, and they bag with all the money was accidentally left behind. “They were in the car, and he found out about it, he went back and the money was gone. They never got it back. I didn’t forget that story.”

Japan figures into the end of the Skull Murphy story as well. Cholak explained that Murphy always brought back sleeping pills from Japan. On March 23, 1970, Murphy was found dead in his Charlotte, North Carolina apartment, having apparently overdosed on sleeping pills. Most considered it suicide.

George Scott, another Hamiltonian who had known Skull as a veteran when he was getting into wrestling, was in Charlotte in 1970. “The day he died … his wife called me and said, ‘I can’t get my husband up. Will you please come?’ He only lived about six blocks from where I lived. I got up at six o’clock in the morning and went over there and he was out. And I said, ‘Uh oh, he’s dead,'” said Scott.

Jim Crockett cancelled that night’s scheduled wrestling show at the Park Center Auditorium. The main event had been set to be Skull Murphy and Brute Bernard against The Kentuckian and Mr. Wrestling.

A magazine report of Murphy’s death said that he had died of a heart attack. “His hairless head, leering face and superbly developed body would never again menace an opponent or drive fans to such states of frenzy that they would try and storm the ring to get at Murphy.”

Skull was one of the first wrestlers to scare me as a kid in Australia.
He would yell scream and just go berserk and I would hide when he walked down the aisle to the ring. But later on I realized just how good this maniac was. He made wrestling in Australia what it was for years, so good and fun to watch.
Greg Kelly, Melbourne, Australia

As youngster in Australia, my favourite wrestler was always Skull Murphy. I purchased a brand new autograph book in anticipation of obtaining his signature the first time I was able to see him live. He entered the ring, I jumped up on the mat, handed him my new autograph nook & begged him to sign, Skull immediately tore it in half and threw it away. I was dumbfounded and the crowd was furious. A true showman.
Marshall Perren