Foley not resting on his laurels 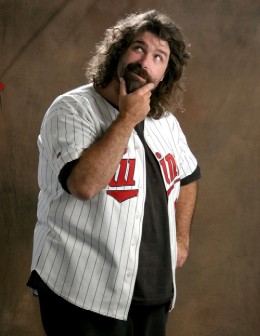 All of these labels apply to Mick Foley.

And with the runaway success of his first book Have a Nice Day, coupled with the fact his latest title – Foley Is Good: And the Real World Is Faker Than Wrestling, currently tops the New York Times non-fiction best-seller list, we can now add one more: acclaimed author.

It might seem weird to think of Foley as a member of the literary world. After all, whenever we think of Foley, images of him crashing through a table, taking a hard bump to the cement floor or setting himself on fire immediately spring to mind.

But for Foley, he takes the label of writer to heart.

“Book publishing is worse than wrestling in some sense,” Foley admitted to SLAM! Wrestling last Thursday during a TNN conference call. “I guess I’m naïve but I really thought when a guy put his name on a book it meant he wrote it. That is not always the case in some places. (Book publishing) is the only business in the world where someone blatantly takes credit for something they didn’t do. I take the label of author very seriously. I think of it as a major accomplishment in my life.”

Foley is hoping that this book can break down the proverbial wall of respectability in the literary community; a wall that Foley knows is tough to tear down due to the preconceived notions people have about the wrestling industry.

“The New York Times came to my house and did a story and my publisher feels that that’s going to be the one to break down the wall. In the literary world the New York Times sets the pace and I have reason to believe it’s going to be a very positive article. It’s frustrating to sit back and have people just dismiss the first one as being a fluke.”

In describing the writing process of this book compared to his first, Foley admitted this time he had more fun.

“I wasn’t under any kind of writing pressure because nobody knew that I was writing a book. It wasn’t until I went to Southeast Asia (on a tour) and I was on a plane for an incredible amount of time and Stephanie McMahon joked to somebody ‘Don’t worry about Mick he’ll probably just write another book’. And I did start to write another book. It was a relaxed atmosphere unlike with Have a Nice Day where I had to have the book completed by a certain day.”

Foley dedicates an early chapter in this book to his views on backyard wrestling, a subject he’s intimately familiar with.

“I do feel like I’ve probably contributed to it indirectly and I think there’s a feeling amongst the kids doing it that I just jumped off my roof and worked my way right into a lucrative wrestling career,” explained Foley. “I think if the kids knew that in my first six years I earned a total of $30,000 and really went through a lot of tough times and that even when I was training the emphasis was always on the basics, the fundamentals and that I didn’t start throwing anything even remotely risky into the repertoire for a few years. I think if they knew that they’d stop looking at me as their role model but I think kids are going to do stupid things because to a certain percentage of the public that is stupid. In some of these cases these kids have elaborate rings in their backyards and in many cases their mom and dad are cheering them on as they risk permanent paralysis.”

Uncomfortable with Foley Is Good: And the Real World Is Faker Than Wrestling being labelled a “wrestling book,” Foley feels there’s reasons why non-wrestling fans will enjoy it as well.

“I think it’s the same reason why a lot of non-boxing fans like the Rocky movie. It’s more about the guy chasing his dreams and dealing with the hand life gave him and I think Foley is Good offers a lot more than wrestling. I think it’s a wonderful book about fatherhood.”

The budding author isn’t resting on his laurels either. He has a new children’s book out in October, he has several others already written and illustrated and admits that his next big project will likely be a fictional novel.

As far as returning to wrestling, Foley admits that it’s almost inevitable that he step inside the ring at least one more time.

“It was actually on the books that I would have a match at WrestleMania with Vince but it just didn’t seem like the right time. The fact that I’ve gone 60 weeks without a match is a lifetime in pro wrestling. So I don’t feel like I’d be going back on my word to do one match because it is hard to be a pushed character on television show that doesn’t eventually end up in some kind of a physical altercation.”

While Foley would love to take on one of the WWF’s top stars in a return match, he knows the chances of that happening are slim.

“I would have to be really good shape to take on a Steve Austin or a HHH, whereas if I worked with Vince we could probably fumble our way through with a garbage can. From a storyline standpoint and because of all the history we have between us, (my return match) would have to be with Vince. I don’t know if that would give me the perfect match to go out on but honestly the perfect storyline would have been the way I went out with HHH at No Way Out. The reality is to be a major character in the WWF, I’ll probably have to eventually have another match.”

Many critics and fans feel Foley has enough insight into the sport that he could make a contribution to the WWE as a part of their writing team.

“Vince had asked me and I guess it’s always been a given that I could do it if I wanted to. It would be very frustrating for me to work on a deadline, for me to produce that much television in such a short amount of time. I just think it would be very anxiety inducing and that’s not why I got out of wrestling, to be involved in an even bigger pressure-cooker… My strength has never been coming up with good ideas for other people, its always been coming up with ideas for myself that helps other people.”

Addressing the WWE’s buyout of WCW, Foley acknowledges he would have liked to have seen the promotion flourish on its own but that was no longer possible.

“It’s certainly better than the alternative, which is to see it die. The best-case scenario is to see what we had a few years ago when both companies were red hot. As soon as WCW started sizzling, I knew there was a lot more pressure on us to be creative. I personally look at it as a challenge. Nobody has given me any indication that I would end up on their show but if I were, I would look at is a challenge to give it some sense of decency from an entertainment standpoint.”

“In a perfect wrestling world, both WCW and ECW would be surviving on their own,” continued Foley. “Unfortunately, WCW pretty much established a textbook example of how to fail at business. They did that by failing to plan for the future, by insulting their audience’s intelligence and by pushing the old guys instead of the young guys. Hopefully we can learn from their mistakes and try not to repeat them. As far as WCW is concerned, hopefully we can make something out of it.”

Horror stories have circulated over the Internet about the WWF’s top stars playing politics backstage in order to hold onto their spots. Namely HHH has been reported as trying to hold mid-card talent like Chris Benoit and Chris Jericho down and prevent them from attaining a higher spot on the roster. While many critics feel this reported display of politics is exactly the type of thing that led to the demise of WCW, Foley thinks it’s a bunch of bunk.

“I think people are reading too much into it. I haven’t been in the dressing room for the past seven months… I know there’s some frustration on some of the upper tier middle guys as to what they perceive to be the glass ceiling, they can’t quite get through but I think they’re just staying patient and at the same time realizing they’re earning a lot more money than the top guys were five years ago. I still think it’s a happy dressing room but from a fan standpoint there’s only so many match-ups you can have between the top four guys.”

As a grizzled veteran of the mat game, Foley now finds himself in the role of elder statesman offering advice and guidance to those coming up in the business… especially to those who have a penchant for high risk maneuvers like Foley had during his colourful career.

“I try to tell the young guys to try not to paint themselves in a corner where they’re known as big risk takers. I was kind of lucky in that I was able to broaden my character to where people weren’t just driving miles to see me land hard on the concrete. So with those guys, I hope they come up with characters that the fans can enjoy for reasons other than their high-risk style. I do tell them to work on their interviews and to try to think of ways of creating matches that are not centered around big bumps.”

As an outspoken critic of the PTC and articulate ambassador to the sport of wrestling, many feel Foley could have a future as a politician if he wanted to.

Foley has no such aspirations.

“I think I would be really frustrated by politics because the more I read about it the more it seems like just a big bi-partisan gathering. I know when I was on the Senate lawn during the ‘Smackdown your Vote’ campaign that I physically felt ill being around all these fraudulent people. I don’t think I could go through life with a job that made me stick to my stomach everyday.”

Quite a dubious statement considering the nature of wrestling and those who run it.

“Oh come on,” Foley responds to SLAM’s comment during the conference call. “The shysters in wrestling have nothing on the ones in politics. There’s much more backstabbing and fakery going on in politics than there is in wrestling.”

Spoken like a true wrestler… and a true politician.