Mick Foley is a man of contrasting talents and conflicting mindsets. A sort of Henry Jekyll and Edward Hyde of the squared circle. On one hand, he is a nerdy court jester whose off-the-wall sense of humour has translated into some truly classic skits that have put fun and merriment back into a pro-wrestling, an industry that more often than not takes itself way too seriously. On the other, he is a masochistic, hardcore grappler who sees the grotesque beauty in a good blade job or a sickening bump. It is no wonder that Foley was so comfortable playing a wide variety of characters from the mentally unbalanced Mankind to that impish reject from the sixties, Dude Love. 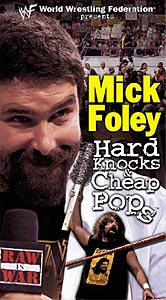 In ‘Hard Knocks And Cheap Pops’, the latest video release concentrating on Foley’s misadventures in the WWF, the producers have once again taken the low road by employing canned footage from the Federation’s television shows and pay-per-views that diehard fans have already seen. Normally, this would be cause for much groaning and griping from yours truly. However, like the recent Chris Jericho compilation, it is Mick Foley’s witty and perceptive running commentary which elevates this tape above and beyond your standard WWF home video fare. It is Foley himself who acts as our guide through the breakup of the Rock And Sock Connection tag team, his bloodstained feud with Triple H as well as the ups and downs of his tenure as WWF Commissioner.

To help us better understand what went into the much praised Triple H and Foley rivalry, The Game himself puts in a guest appearance as he looks back on how the two superstars were able to thrill wrestling fans the world over with their cruel and punishing matches. The street fight from is shown almost in its entirety with Foley and Triple H interjecting their thoughts here and there on what we are seeing.

On the lighter side of things, Foley treats us with a recap of his amusing skits with Edge and Christian. The “totally awesome” dudes sit down to chat with Foley and share with us how they all came together to conjure up some laughs. This segment is by far the best on the tape as the gags they pulled never get old. I still howl at the birthday party for Triple H where Christian played Hunter’s theme on a kazoo as well as the whole chicken suit bit with Kurt Angle. They are stupid. They are childish. Yet, the skits are so darn funny. It’s was a great idea to have the highlights all on one tape.

All in all, I give the WWF and Foley himself full marks for the ingenuity found on ‘Hard Knocks And Cheap Pops’. They could have just spliced together the footage and it still would’ve sold no matter what but they took some time with it, gave us a reason besides the obvious to review this part of Foley’s famed career and because of that, put together a unique package that fans would appreciate.