End of an era on TBS: Solie, Georgia and ‘Black Saturday’ 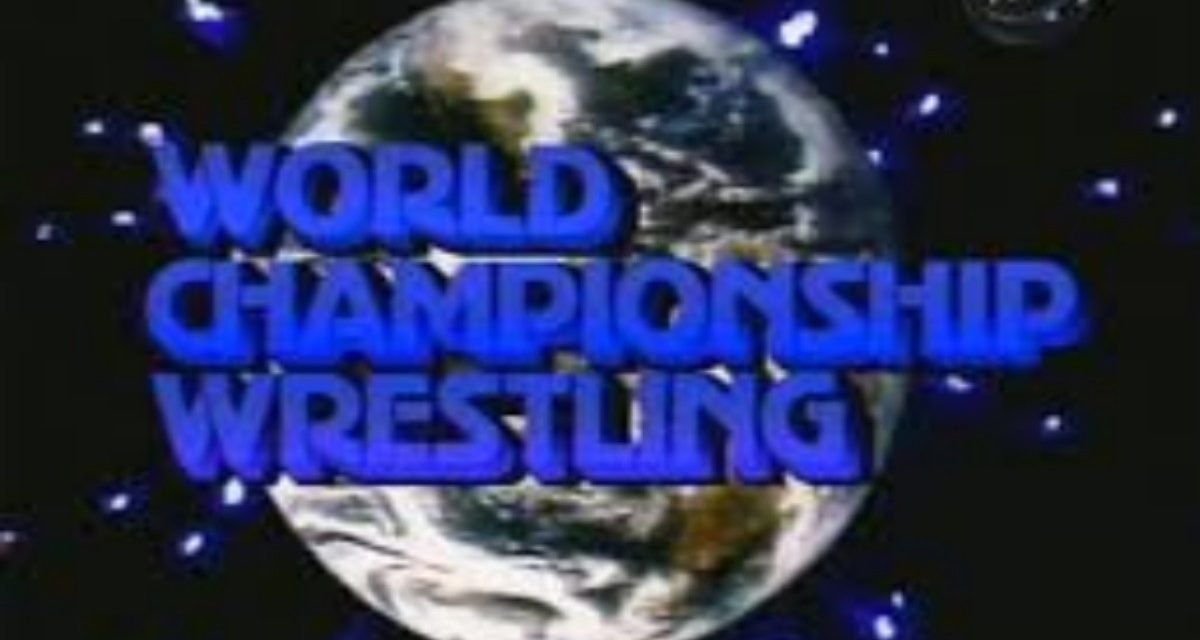 When Turner Broadcasting CEO Jamie Kellner cancelled WCW programming on TBS, it spelt the end for WCW as a whole. As he watched WCW Thunder on March 21st 2001, the last wrestling program to air on TBS, John Molinaro couldn’t help but reflect on the significance of such a loss. After all, wrestling had been a staple on TBS since 1972. In this first of a three part series, John Molinaro looks back at the early years of wrestling on TBS.

Having just finished the fifth grade, I was looking forward to a summer of afternoons spent at the Centennial Community Swimming Pool, house league soccer games and wading knee high in a creek by Sherwood Forest with the Middleton brothers searching for minnows.I was a gawky ten year old in July of 1984.

I ran home every day for lunch, checking the mailbox to see if “it” had arrived. I was waiting on a letter from school that would have my class assignment for the following year. I was praying that I wouldn’t get Mrs. Gowan for homeroom. A middle-aged woman with a quick temper, she had terrorized my two older brothers when they attended Ascension Primary School. My brothers, the louts that they were, had terrorized me with exaggerated stories of how she grabbed students up from their desks by the ear and marched them out into the hall where she smacked them across the knuckles with a ruler.

The letter arrived about a week after school let out and as luck would have it, I was assigned to Mr. Rzepa’s class. Whew! I rejoiced. I was in the clear. I could relax and turn my attention to what mattered most to me that summer: street hockey games, trading baseball cards and wrestling. Nothing could possibly ruin this summer, I thought.

And then it happened.

After 12 years of airing in the 6 PM timeslot on SuperStation TBS, Georgia Championship Wrestling was replaced with WWF programming.

Instead of Gordon Solie and Freddy Miller talking about this Sunday’s card at Atlanta’s Omni, there was Vince McMahon Jr. and Gorilla Monsoon engaging in some inane banter before throwing to some ‘jobber’ matches. Instead of the NWA’s brand of hard-hitting wrestling, there was the WWF’s circus sideshow.

Georgia Championship Wrestling was an institution on WTBS ever since Ted Turner launched Atlanta UHF television station WTCG (TBS’ predecessor) in 1972. Taped on Saturday mornings in the TBS TV studios in downtown Atlanta, each week Gordon Solie, God rest his soul, opened the program and welcomed millions of wrestling fans with his famous refrain:

When you see this symbol (pointing to an NWA emblem), you are assured of the optimum in professional wrestling.”

A small TV studio. A handful of fans. Three cameras. One ring. One microphone. That brown backdrop with the TBS call letters and the NWA symbol on it that stood behind the interview podium. Gordon Solie.

It may sound like just another wrestling show, but to many of us, Georgia Championship Wrestling was more. Much more.

A generation of wrestling fans grew up and lost our innocence watching Georgia Championship Wrestling. It was a part of our lives. To many, the stately Gordon Solie was like a favourite uncle, heels such as Masked Superstar and the Freebirds like annoying cousins we loved to hate. Every Saturday evening we invited them into our home. Every Saturday, they brought us a little bit of magic.

Bill Watts. Ole and Gene Anderson. The Assassins. Mr Wrestling II. Dory and Terry Funk. Stan Hansen. Tommy Rich. Austin Idol. Kevin Sullivan. Thunderbolt Patterson. The Fabulous Freebirds. Masked Superstar. Ernie Ladd. Dusty Rhodes. Ivan Koloff. The Samoans. The Super Destroyer. Bob Armstrong. Buzz Sawyer. Roddy Piper. They were all there. At one time or another, every major star in the NWA, regardless if he worked for the Georgia territory or not, appeared on Georgia Championship Wrestling.

Even a young upstart from Jim Crockett’s Mid Atlantic Wrestling promotion by the name of Ric Flair. Flair, who in 1978 was being considered by the NWA Board of Directors to be made NWA World Champion, knew the importance of appearing regularly on Georgia Championship Wrestling. Being seen on a TV program viewed by millions of fans, not to mention every other NWA promoter not seen him, helped Flair fulfill his dream of becoming NWA World Champion three years later.

In 1976, a second show was added to WTCG’s line up as “Best of Georgia Championship Wrestling” started airing on Sunday afternoons. In the fall of 1979, Georgia Championship Wrestling became the first wrestling television show to be broadcast across the country on cable as SuperStation WTBS, the flagship station of media tycoon Ted Turner, was born.

The program became such a cult favourite that no matter where they were, wrestling fans made sure they were in front of a TV set at 6:05 every Saturday for two hours of Georgia Championship Wrestling. Everybody watched the show.

“I used to drive 60 miles over to the nearest town because we didn’t have cable where we grew up,” WWF Senior Vice President Jim Ross told Dave Meltzer, editor of the Wrestling Observer Newsletter in July of 2000. “No matter where I was on Saturday, I tried to watch that show.”

By 1981 the show, then renamed “World Championship Wrestling”, was drawing an average 6.4 rating on Saturday nights, making it the most-watched show at that time on cable television.

But just as Georgia Championship Wrestling reached incredible levels of popularity, it started to slide. The promotion struggled the next few years as booker and part-owner Ole Anderson, mismanaged the company by booking the territory’s top stars on other NWA shows around the country as opposed to having them appear on shows in cities like Atlanta, Macon and Savannah that made up the Georgia territory. They started running shows in states like Michigan, Ohio, Pennsylvania and West Virginia and in the process skipped going to cities that had been a part of their house show circuit for years.

At the urging of local Georgia promoters who were growing frustrated with Ole, majority stockholders Jim Barnett, and Jack and Jerry Brisco sold controlling interest in the company to Vince McMahon Jr. McMahon had visions of taking the WWF, a regional promotion based in the Northeast he had purchased from his dad, to a national level. McMahon closed Georgia Championship Wrestling down and assumed the company’s TV contract, bringing the WWF to Ted Turner’s TBS.

And so, on Saturday July 14, 1984 the WWF debuted on TBS, thus pulling a death shroud over Georgia Championship Wrestling and putting an end to what was an institution to millions of wrestling fans. In one fell swoop, twelve years of quality wrestling on TBS went straight down the drain and McMahon, with TV clearances on TBS and the USA Network, suddenly seemed poised to dominate the wrestling world.

No wonder so many of us back then dubbed it ‘Black Saturday’.

McMahon got word of the complaints and in an Atlanta Journal Constitution news article responded by saying, “We’ll show those complainers the difference between a major league and a minor league production, given time.”

Instead, it was “those complainers” who trumped McMahon.

As the complaints kept pouring in, TBS decided to listen to its viewers. Two weeks after the WWF debuted, the station granted a 7:30 AM timeslot to Ole Anderson’s upstart Championship Wrestling from Georgia outfit. Solie was back as the lead play-by-play man, quality wrestling was back on TBS and everybody seemed at peace.

All except for McMahon.

Outraged, he reneged on the deal he had with Turner to produce a separate weekly TV program for TBS that was to be taped at TBS’ studios. Instead, McMahon aired tapes of his other syndicated WWF programs. The relationship between Turner and McMahon began to further fall apart when Turner, upset over the WWF’s low ratings on TBS, gave a one-hour, Sunday evening time slot to Bill Watts’ Mid South Wrestling. Hosted by a much younger Jim Ross, Mid South Wrestling drew better ratings than the WWF by its second week on TBS.

Realizing they could no longer work together, McMahon and Turner came to an agreement as McMahon sold the right to his timeslots on TBS to Jim Crockett Jr. for $1 million, thus ending one of the most tumultuous business relationships in wrestling lore and laying the foundation for the bitter WCW vs. WWF promotional war that followed years later.

And so began a new era on TBS: the Crockett Years.

Looking back at the era of Georgia Championship Wrestling on TBS, so many fond memories come to mind:

Gordon Solie and his trademark phrases (“Indeed”, “we’ve got to get some order restored”, “Oh my word!”, “pier-sixer” and “crimson mask”); Freddy Miller hyping the upcoming shows at Atlanta’s Omni, punctuating his pitch with his famous, ‘don’t-ya-dare-miss-it’-like tag line “Be There”; Roddy Piper revolutionizing the concept of the heel colour commentator, long before Jesse Ventura was credited for it; Ole Anderson turning on Dusty Rhodes during a steel cage match — the culmination of an angle that played out for a year where Ole tried to convince Dusty to team with him so that he could then backstab him; Flair cutting his first interview as NWA World champion in 1981 two days after beating Rhodes for the title; Don Muraco shoving a beleaguered Solie to the ground, only to have Piper turn babyface and come to his rescue; Buzz Sawyer battling Tommy Rich in the Omni in a bloody, steel cage match that was dubbed “The Last Battle of Atlanta” by the local media; the infamous four flat car tires angle with Austin Idol and the Freebirds.