ECW days behind him, Nova looking to shine

Being a huge comic book fan, it’s no surprise that Mike Bucci drew on the elements of his favourite superheroes when developing his wrestling persona. The result has proven to be one of Extreme Championship Wrestling’s most popular stars, Nova.

Wearing a costume adorned with the logo of the Green Lantern or the Flash, Nova dazzled his opponents with a devastating aerial attack before finishing them off with his dreaded Kryptonite Krunch or the powerful Novacaine.

It was almost as if he had jumped right off the pages of a comic book and into the ring.

Alas, it may be no more.

“I loved the cartoon gimmick,” he told SLAM! Wrestling in a recent interview. “I had a lot of fun with it. But I think it ran its course… it’s totally done.” With ECW’s future looking more and more bleak, Bucci feels that retiring the character may be the best thing he could do. “If I go with another company, I would want to change 100%, do something totally different. I’ve mastered the whole ‘good guy / babyface’ thing… I’d love to play something new.”

His first step in that direction was a completely remodelled physique. At ECW’s last pay-per-view show, Nova debuted his new, leaner and meaner look, replacing the cartoonish tights with chiseled muscle. “In the past year, I really made some improvements to my body. I’m down from about 260 pounds with 35% body fat to 190 pounds and about 9%. I wasn’t out of shape before, but now I’ve never been happier with the way I look. Al Snow once told me ‘You’ve got to look like a star to become one.’ It’s a cosmetic business. You do what you have to do.”

Unlike the Incredible Hulk and Spiderman, who obtained their strength through radiation experiments gone awry, Bucci got his new-found powers the old-fashioned way: hard work and determination. “I work out now six or seven days a week, I do two hours of cardio a day, and I’m lifting weights all the time. I learned everything I could about nutrition and proper diet, and now follow a strict plan.”

Of course, in the wrestling business, anytime somebody makes a drastic change in the way they look, rumours of anabolic steroid use run rampant. Bucci’s answer to the question is simple: “I never did them.” He did, however, benefit from some research into them when sculpting his new frame. “I did a lot of reading on steroids. I wanted to find out what each one did, how it worked, and how I could get the same effect naturally. They make you ‘jacked’, make the muscles bigger. They don’t give you the ‘cut’ look that I wanted. So, for me, I didn’t see the benefit.”

The other part of Nova’s recent evolution was the change in his attitude, a change that has taken place over the past six years. “I started with ECW in 1995 as part of Raven’s Flock. After that, we did the bWo… that was cool.”

Soon after that, however, Richards and Meanie left the company, and Nova had to reinvent himself. Focusing more on his wrestling, he formed a tag team with his friend Chris Chetti. “That’s when I started being more serious. I made a 180-degree change from when I first started.” The duo had some success until an injury put Chetti on the shelf for some time. Nova decided to pursue a singles career, and had some success, until Chetti returned with an unbridled hatred for his former partner which exploded after the pair was eliminated in a tournament for the tag team titles. The two finally met head-to-head at last year’s Barely Legal pay-per-view, a match which Nova considers one of his best ever. “That was Chris’s last match with ECW… I’m really proud of that one.”

After that match, Nova was set to enjoy a long-awaited push. Until circumstances arose which effectively shut down ECW for the past two months. Industry insiders have all but confirmed that the company is not long for this world. Still, Bucci is hoping for the best. “I hope it continues on. I think the business needs ECW. It’s a great outlet for talent, a lot of people make their living from it, and a lot of the fans enjoy the product.” 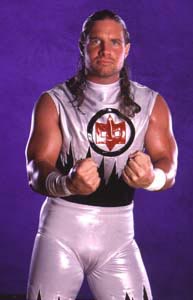 Still, that doesn’t mean that he’s not keeping busy in the meanwhile. “I’m doing a lot of indy shows. I’ve been doing a lot with UPW lately, which is well-known for being a development league for the WWF. They’re a great promotion, very well run. Most independents are terribly run, not professional. Before I do a show, I ask around if anyone else has (worked with) them, see if they say good things. If not, forget it.”

Being that UPW’s last show featured prominent WWF stars Steven Richards and Chris Jericho, does this suggest that, should ECW shut its doors, Nova would be leaning that way for his future home? “I have friends in both companies (WWF and WCW), so either way I would be comfortable. As long as wherever I go, I could be an asset, that’s what matters. I think wherever I end up — and I’m not a shoe-in for either one (of the big two) — I would be a good representative of the company. I consider myself a professional athlete, and I do whatever I’m asked to do… it makes me a better pro wrestler.”

Nova is proud of his reputation as being someone in the locker room who gives it all for his employer. When cutting his teeth in ECW, he would show up at the arena before the other wrestlers to work out in the ring before shows, learning moves and trying new things. “I’ve always tried to be the first one at the building and the last one to leave. I like to think I have one of the best work ethics in the business.”

This attitude was instilled throughout Bucci’s green days when he was a student of famed WWF journeyman (and Canada’s greatest athlete), ‘Iron’ Mike Sharpe. “I started training with Mike in 1992 during my second year of college. He taught me a lot about the business, the fundamentals. He has a lot of respect for the business, and he passed that on to me.”

Bucci has had several other mentors and influences in the business, each who have taught him valuable lessons in wrestling and in life. “Al Snow, who originally pointed me out to Paul (Heyman, owner of ECW), both of them have helped me. Tracey Smothers, he worked out with me before every show and taught me a lot of moves, helped me perfect my skills. Tommy Dreamer helped me more than anyone else… everything I have, I owe to him. You could say ‘father figure’ but that’s corny.”

If there was a Batman to Nova’s Robin, however, it would have to be Tazz, former ECW champion, who now mostly does commentary for the WWF. “Tazz is one of the best people I know. I’ve really tried to model my life, both professionally and personally after him. He lives for the business… he’ll do anything for wrestling. In the locker room, he’s the greatest positive influence you can have. There’s a lot of guys who look up to Tazz. When I’m 32 or 33, I hope I people see my life the way we see his.”

For his part, Bucci has tried to offer other wrestlers a helping hand, the way Tazz and others extended theirs to him. As one of the senior members of the ECW locker room, Nova has been directly involved in keeping the locker room filled with talented wrestlers and future stars. “I helped Steve Corino get into ECW. Paul wanted guys who could work well and be a good fit, and I knew Corino would work out and told Paul. I also put in strong suggestions for Simon Diamond, CW Anderson and Chilly Willy, guys who I knew and had seen.”

Not a bad legacy for someone who wasn’t originally interested in becoming a wrestler. “If ‘Iron’ Mike didn’t push me back then, there’s no way I would be in the business. Until I tried it, I had no interest in being a wrestler. I was always a fan of wrestling, but I was a closet fan. I watched it when it wasn’t cool. I was this fat, chubby kid who had no friends and watched wrestling.”

At 28 years old, Bucci is a long way from that “fat, chubby kid.” Now, he’s looking forward to the next chapter of his career, be it with ECW or any other company. And unlike other wrestlers, who have been turning towards the lights of Hollywood to showcase their talents, Bucci isn’t looking to leave anytime soon. “The biggest thing I have out of the ring is that I was asked to be the spokesman for a nutrient supplement company and a health company. I also had an audition for the TV show Witchblade. A friend hooked me up with someone who works for this talent agency in New York. I met them, and they told me to try out for the part. The whole acting scene, I really don’t care if I do it or not.”

“I’m a wrestler first,” he maintained, “and I’m not looking to give that up for anything anytime soon. Even the worst day I ever had in pro wrestling is better than the best day I would ever have doing anything else.”