If Jason “The Sledgehammer” Anderson appears to be floating on cloud nine lately, that’s probably because he is. The Calgary native just returned from a week’s vacation in Hawaii after competing on New Japan Pro Wrestling’s “Fighting Spirit 2001” tour in February.

The two-and-a-half-week tour saw Anderson wrestle with and against some of the best wrestlers in Japan all over the country, including a tag team match on New Japan’s February 18 pay-per-view event from Tokyo’s Sumo Hall. But perhaps the highlight of Anderson’s Japanese excursion was when he first walked into the locker room at Tokyo’s Differ Ariake Pavilion on the opening night of the tour. 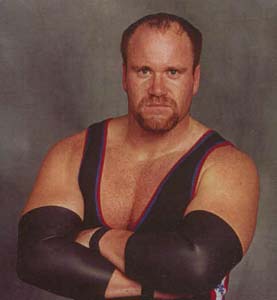 “I thought to myself ‘Wow! Am I really here?’ and that I finally made it here,” Anderson recalled for SLAM! Wrestling last week in a phone interview. “All the boys were great. Not one of ’em had an attitude or chip on their shoulder. You can talk to any of them. Myself, Don Frye and Brian Johnston hung out just about every day. And I did go out a few nights with the Japanese guys.”

Prior to leaving for Japan, Anderson told SLAM! Wrestling that “one of the things I (always wanted to do) before ending my career in wrestling was (to) go to Japan. And what better way to go to Japan than for the number one office in the world? I’m ecstatic. I can’t wait.”

So how did the anticipation of living out a dream compare to the reality?

For the bulk of the tour, Anderson worked in tag matches with Shinjiro Ohtani and Brian Johnston against a variety of opponents including I.W.G.P. World Heavyweight champion Kensuke Sasaki, junior heavyweight legend Jushin “Thunder” Liger and former WCW stars Yuji Nagata and Manabu Nakinishi (AKA Kurosawa). Out off all the matches, Anderson cites a tag team tussle at Tokyo’s historic Korakuen Hall against I.W.G.P. World Tag Team champs Satoshi Kojima and Hiroyoshi Tenzan as his favourite.

“The Kojima & Tenzan match against me and Ohtani in Korakuen Hall was incredible. The people and the noise in there were just unbelievable. The match flowed so well and when I went back stage after when it was done everybody came up to me and said ‘great match’. Those two guys are just a dream to work with. They work a strong style but they’re into the crowd and they do things that they do here in North America where you don’t see much of it during a match in Japan.”

Because New Japan prides itself on being the most physically demanding promotion in the world, Anderson had trouble at first adapting to their brand of wrestling.

“Everybody told me to work stiff, work strong. It is like that over there. They work a lot tighter and not as loose as we do here. I was having a little trouble with it in the first bit of the tour. They spoke to me about it and told me just to relax. They thought I was a little bit loose in my stuff. They said don’t be afraid to really lay it in. By the end of the tour I felt more comfortable. Now I feel more comfortable leaving there and knowing what I did wrong and what I did right.”

Anderson studiously absorbed all the advice given to him like a sponge, making the most out of difficult situation and turning it into a learning experience.

“Every night, just being with Yuji Nagata, Nakanishi and Sasaki and Ohtani as my partner… how can you not learn? Yuji’s a really good wrestler…just amazing. He was the one that came to me first and said ‘hey, don’t be afraid to work stiff’.”

At the conclusion of the tour, Anderson was invited by New Japan to come back later this year.

“(New Japan president) Seiji Sakaguchi asked me how I liked wrestling in Japan and said I loved it. Sakaguchi said they were happy with my work and he mentioned to me the possibility that I could come back in the fall. I’m going to be giving them a call pretty soon and I’m going to see if I can come in for the May junior heavyweight tournament.”

In between time, Anderson, who recently left the Calgary-based Western Extreme Championship Wrestling outfit, has plans to wrestle on an upcoming tour in the Middle East.

“I’m going to Dubai, Kuwait and hopefully after that back to Japan. I’ve totally severed my ties with W.E.C.W.,” explained Anderson. “I just want to do my own thing. It was taking up too much of my time. I was booking for them up until the December 26th, 2000 show. I just had enough. I want to do this international stuff more, because that’s where the money is. There’s no money in local stuff.”