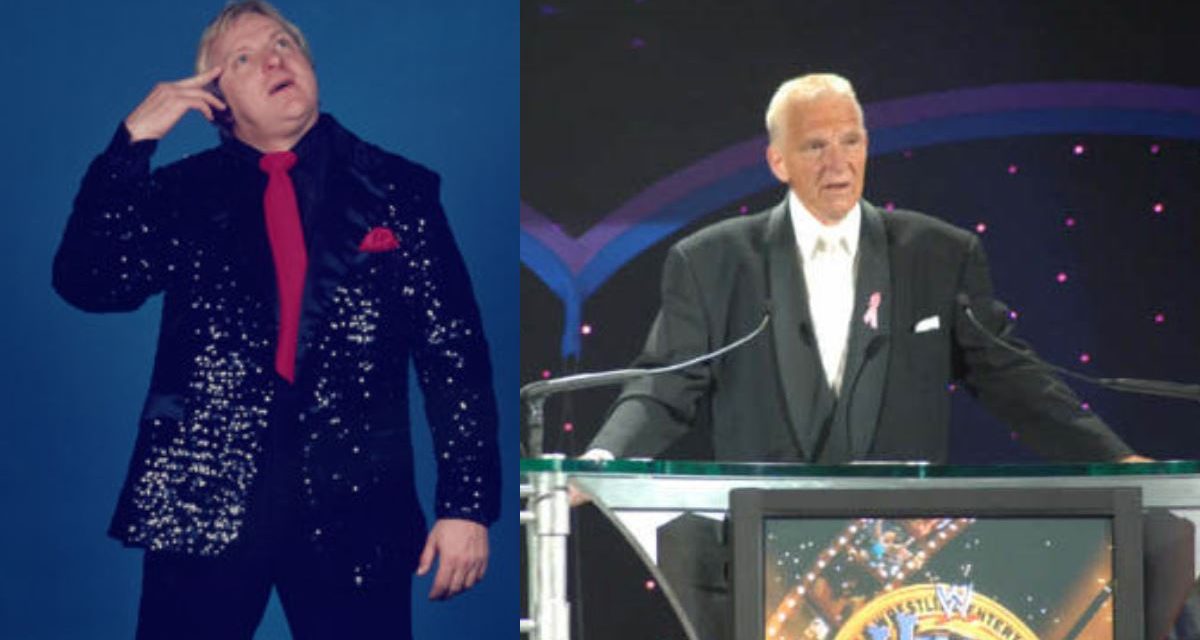 (Editor’s Note: This interview was conducted two days before the Women Of Wrestling Unleashed PPV, which aired on February 4, 2001)

Every humanoid out there has been wondering what’s happened to Bobby “The Brain” Heenan since being unceremoniously dumped by World Championship Wrestling a few months back. The mere mention of his name had wrestling news sites abuzz as it was announced that he would be doing a favour for Women Of Wrestling owner David McLane and appearing on the fledgling company’s first ever Pay-Per-View, Unleashed. 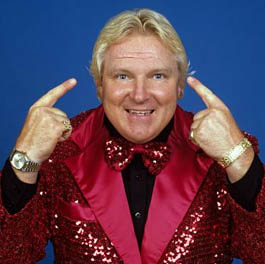 Well, many a scribe has had the itch to get inside Heenan’s head and see what makes “The Weasel” spin the wheel – which is basically our way of saying what makes him tick. After all, “The Brain” is a legend in wrestling. His witty commentary has been known to save many a broadcast and his ability to get workers over or help them attain heat has been forever documented in the annals of wrestling.

So, being the wrestling junkies we are at SLAM! Wrestling we jumped at the chance to talk to Heenan and one of the questions on everyone’s mind is why are you doing WOW?

“After 35 years of watching half naked men (wrestle), why not watch beautiful women do it?” Heenan said.

Good point. It becomes obvious very shortly into the interview that Heenan’s wit is still razor sharp, not having been dulled by age, or being forced to sit out of the wrestling actions for awhile. And according to “The Weasel” (his other nickname from his tenure in the World Wrestling Federation), he doesn’t plan on getting dull either. He went into the Unleashed PPV prepared and boned up on his knowledge of the workers.

So, what match are you most looking forward to then?

“They’re going to shave a girl’s head (Ice Cold, as it turned out), whoever loses the fall. I want to see that. Bald headed women aren’t pretty. They’d look like (Mean Gene) Okerlund without a moustache.”

As many of you have heard over the Net, the WOW show was heavily maligned, but not due to Heenan’s commentary, which has been listed in several re-caps of the card as being one of the few highlights. Don’t look for his commentary to be a regular staple of the broadcasts though, at least not yet.

That last statement is in contrast to his final days in WCW. According to Heenan, he’s looking, now, to avoid past situations he found himself in. Indeed, Heenan goes on record as saying that the vast majority of his time in that promotion was not very fun at all. At what point did he notice this?

“About six months into the job. I realized that the knowledge I had in wrestling, in working for the AWA, working for the WWF, and the NWA, when I came to this production crew and the way they produced wrestling, it wasn’t what I liked. It didn’t make sense to me and I was never comfortable with it. And they didn’t like me either. I would never knock the WWF. You know why I never did? Because I was there for ten years. If I knock them, I knock me. It’s like the woman who says, ‘I was married to him for 20 years, he fooled around on me from Day One.’ Then why’d you stay, bimbo? So I was paid by Turner’s people to put over Turner’s product and that’s what I was paid for. No ever told me to knock Vince (McMahon), no one told me not too; I just didn’t do it.”

This interview was not designed to slam any wrestling promotion but Heenan’s last few years in the business had been spent with WCW, so it’s only logical that many questions about his tenure there are going to pop up, such as why they released him from contract.

“I had one year left on my contract and they didn’t want to honour it, because they wanted a younger look, they wanted a more MTV looking guy, so they hired (Mark) Madden. Then they took me off of Thunder, because they put Stevie Ray on and wanted to see how he would do as a commentator. Eventually I ended up doing nothing, I had one whole year left on my contract and I was going to retire anyway. I just didn’t like it there. I wasn’t having fun there. I don’t want to work unless I have fun. I didn’t have fun there. I never had fun there. The only reason why I went there was because I got a cheque every weeks and benefits. That’s the only reason I was ever there.”

And things didn’t get any easier more recently as Vince Russo also jumped ship from the WWF to the WCW a little less than two years ago. To Heenan, Russo wasn’t all that he was hyped to be.

“Russo wasn’t there when we were doing good business. Russo was a writer for (McMahon) at a magazine and when Vince Russo came on board he didn’t write the shows, he gave ideas. (McMahon) critiques everything – believe me. Nothing goes on there, nothing you see has not been seen by Vince McMahon. So when Russo and those guys came to WCW they thought they had a free hand. I just don’t think they were that talented at what they did.”

He also has some criticisms for some of his most recent colleagues as well, after starting off by mentioning who he admired most when working in the announce booth.

“Sometimes I say things and the people I work with don’t know how to pick up on what I say as where Gorilla Monsoon was a pro. He was the best I ever worked with in my life. Gorilla was the best, and Vince McMahon is the best too, when it comes to putting over something he wants to put over. The people I’ve worked with lately, they’re just taking their pay-cheque and going home, I think. They don’t have any creative ability, and that’s how I feel. I’m not going to name names, but they know who they are. ” 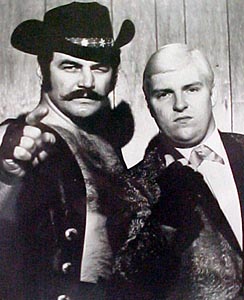 Blackjack Lanza and Bobby Heenan from many years ago.

Russo tried to usher in an age of “crash TV” at WCW, which in itself did not bother Heenan. As a matter of fact, The Brain says there’s really only one thing that bugs him about today’s product.

“The wrestling we knew from studio wrestling – it’s no longer ever going to be like that. (McMahon) changed the whole industry. (McMahon) is a genius. He’s made it more corporate, more accessible for people to make money, manufacturers, entertainment, just everything. He’s changed the whole realm of the business. Which is great. We’re making more money now than we ever made in our lives, because of Vince McMahon.”

He continues: “The racy content never bothered me because I don’t care what people say. If you say whatever you want to say, it’s not going to affect me, it’s going to affect you. I didn’t care for all the ladies, and all the jiggles, and all the girls that just don’t look right. It looks like you should be putting a dollar in their pants, then going outside to try and find your Pinto and then go home. It didn’t make sense to me.”

Many fans today have been brought up on the current product, where more soap opera type elements have taken centre stage. But there are also many out there who’ve been watching wrestling for years. As Heenan said at the beginning of the story, he’s been in the business for nearly four decades. However, in all that time, one of the most famous things he’s been known for, at least when it comes to drawing heat, is the liberal use of the word “humanoids.” Heenan tells SLAM! where he got the inspiration for using it.

“It just comes about by looking around and opening your eyes. You watch a guy walking through a bus station, airport, cab stand, anyplace, every one looks like a humanoid. They don’t know how to travel. They’ve got blue luggage, yellow luggage, a white sock on, and a blue sock, and they’re thinking ‘I got another at home just like it.'”

Of course, while marks and fans will have they’re own special memories of Heenan, he has a few of his own.

“Well, going to the ring with Andre The Giant, in front of 93,000 people, in Pontiac (WrestleMania III), that had to be a highlight. Even being in something that I wanted to be in all my life, wrestling – I got to do that – that’s a highlight of my life.”

After looking back on his career for a while, it is now time to discuss the future. If wrestling is not as ripe as opportunities as it once was, how about Hollywood?

“Well, Hollywood’s a hard thing to get into because you got be there, you’ve got to read the parts, and you always got to be there on call and stuff. I don’t really want to do anything like that and be that obligated to do something. I just want to pick up stuff here and there. I want to enjoy my life now.”

Indeed, Heenan has definitely put in his time in professional wrestling. Backstage politics, feuding territories, fighting injuries – after 35 years you’d want your day in the sun too. And Heenan is not apologetic about it either.

Some of you may be wondering how Heenan can afford to do this. After watching documentaries like Beyond The Mat, reading Mick Foley’s biography and having more of a spotlight on independent promotions over the last couple of years, most everyone knows that it has been down right difficult for some wrestlers to make a decent living in the sport. While things may have been more financially rosey for Heenan in the last few years, it was definitely not that way when he started in the 1960’s. He’s not called “The Brain” for nothing though, as he testifies that he realized he had to start saving money early to be financially independent today.

We left off Heenan on a final question, and one that most every fan of his has been asking. Is a return to the WWF, where many say he spent his most entertaining years, an idea he would consider?