Mike Sanders a superstar in the making

Look up and down the card for this Sunday’s WCW SuperBrawl pay-per-view and one familiar face is curiously missing from the line-up. Former WCW Commissioner and Ric Flair’s current “pet project” – Mike Sanders – is nowhere to be found. Maybe it’s because he isn’t involved in a hot feud at present. Maybe it’s because he’ll be appearing in a last minute “bonus match” WCW is famous for or it could be that Sanders is working the show in another capacity besides grappling in the ring. Whatever the case may be, Sanders is primed and ready to contribute what he can to the show. 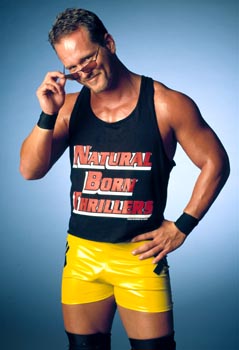 “I am always disappointed when I don’t wrestle,” Sanders told SLAM! Wrestling. “I like to be out there in the ring so whatever they (the bookers) need me to do, I will do.”

Since he debuted in WCW insiders have pegged Sanders as one of the very few superstars who possesses a “natural ability” when it comes to professional wrestling. His in-ring technical skills are strong and smooth. As a definite plus, he looks very comfortable and relaxed cutting a promo or interview. Displaying poise well beyond his years in the business Sanders has been compared by some to a young Ric Flair or Arn Anderson. Sanders is careful not to let the praise go to his head this early in his career.

“Being compared to those guys, yeah, it means a lot because they are legends in this business. It’s a compliment and it drives me to do better,” he said modestly.

A former communications officer and self-professed “computer geek” with the United States Army, Sanders got his start through the connections he made at the Main Event Fitness Gym owned and operated by WCW superstar, Lex Luger. He was encouraged to give wrestling a shot by people like Diamond Dallas Page and Robbie Rage who convinced him to train at WCW’s Power Plant facility. A fan of Georgia Championship Wrestling, Sanders always thought he had a “knack” for entertaining people and enrolled with the Power Plant to put himself to the test.

In February of 1998, Paul Orndorff took over managing the Power Plant. According to Sanders, Orndorff didn’t think he had what it took to make it in the business and fired him in May of 2000. It was then that WCW bookers Terry Taylor and Vince Russo salvaged his career.

“Terry Taylor told me he didn’t want to lose me so he asked if I would do the Russo And Bischoff (R and B) Security deal which was going on at the time and some different things,” Sanders recalled. “Through that I started working some WCW World-Wide matches and stuff like that. Terry Taylor and Vince Russo gave me my job back. Vince Russo was the one who said ‘Give the kid the mike and see if he can talk’. From there, I’ve went onward and upwards.”

Appreciative of his second chance Sanders has taken great pains to learn all he can from wrestling legends like Ric Flair and Arn Anderson behind the scenes so he can continue to improve his abilities. He acknowledges Flair, Anderson and Ernest Miller with helping him critique his promos. To him, their advice has been invaluable in bettering his appearances in front of the camera and behind the mike. Sanders is also grateful for the support he’s been given from the man who is scheduled to face WCW World Heavyweight Champion Scott Steiner at the SuperBrawl pay-per-view.

“The most influential person in my life as far as helping me out is probably Kevin Nash. He is just unbelievable,” praised Sanders. “He gave me a new understanding of the business because you sometimes when you get a push, you get caught up in thinking you know what’s right and what’s wrong and he really enlightened me because he is not afraid to tell you what he thinks. He’s really helped me out a lot as far as what works and what doesn’t. Taking a situation that may not make sense and making it make sense. He’s been tremendous.”

Working with Nash as part of the “coach angle” with The Natural Born Thrillers was one of Sanders’ favourite moments to date. Not only was it enjoyable tagging-up with Nash but he had a lot of fun participating in the storyline as everyone involved was playing it for broke. Another of Sanders’ proud accomplishments is his brief run as the fictitious WCW Commissioner. The role shone the spotlight on him like never before and Sanders found it surprisingly easy just being himself. If nothing else, it gained Sanders some important notoriety that a wrestler needs to lobby for a bigger and better push.

As WCW fans have seen though, The Natural Born Thrillers are slowly but surely being splintered apart as are many of WCW’s stables as the company shifts its focus. Sanders remains convinced that the changes are for the best. His positive attitude stems from the fact that WCW future looks brighter now that Fusient Media is putting the finishing touches on its offer to buy the wrestling promotion. Sanders says the mood is upbeat. Most think that the much-needed shift in management will return WCW to its former glory days.

“In my opinion much of the energy in the locker room is positive,” stated Sanders. “I think Eric Bischoff brings something to the table that people want. And when you got something that people want, all the guys are excited and the motivational factor is up. Spirits are up. The morale is up. People tend to want to go out there and give it a hundred and ten per cent.”