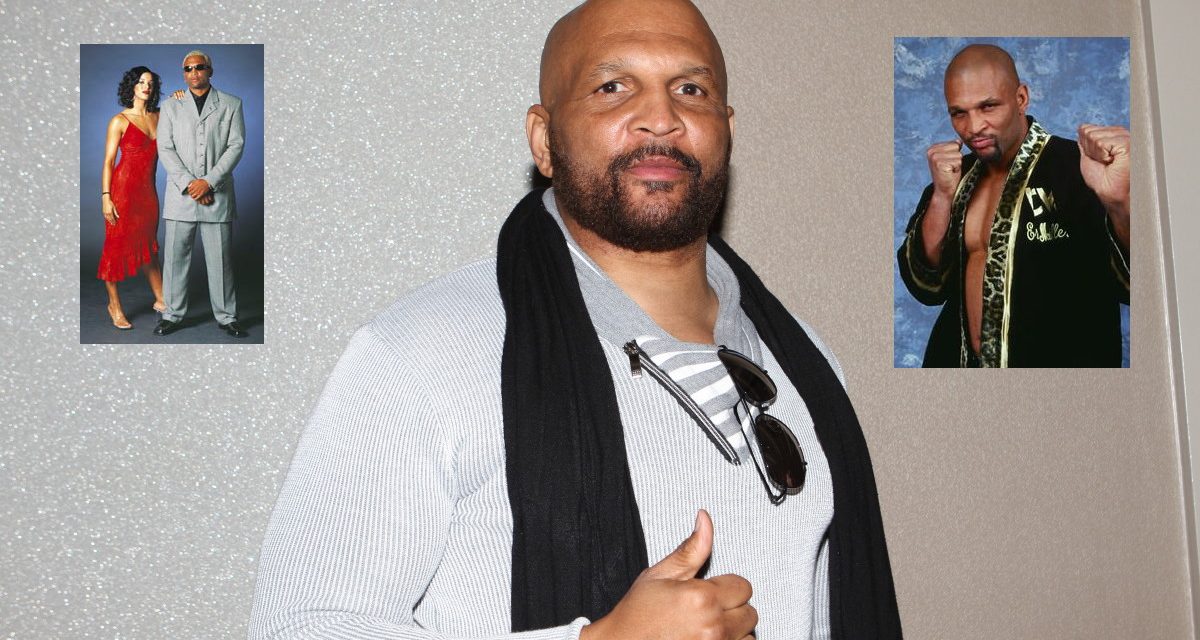 Growing up, the two favourite things for Ernest Clifford Miller were karate and James Brown. Studying karate led him to three world championships, a job in WCW, and the satisfaction of helping many kids train themselves in the sport. James Brown inspired the funkiness and flair that wrestling fans have come to expect from The Cat.

Miller recalled one time when he was growing up in Atlanta where his family went to the Six Flags amusement park, but he feigned ill to stay home and watch The Godfather of Soul.

“I sat there for two hours, all by myself, watching James Brown live on TV,” Miller recalled for SLAM! Wrestling. “They came back talking about the great time that they had. They didn’t know that I had an even better time sitting home watching James Brown. And every so often, I’d get up and cut a rug too, right in front of the TV.” 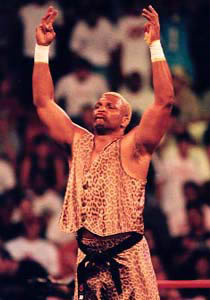 The Cat in Vancouver. — Photo by Rik Fedy

So when the powers that be at WCW decided to arrange to have James Brown appear at the SuperBrawl pay-per-view in February 2000 in San Francisco, Miller was in heaven.

“He’s a big wrestling fan, and when I finally got to meet him at SuperBrawl in San Francisco, I did the little dance with him. I was floating on a cloud, man!” Miller explained. “I don’t drink, I don’t do drugs, never have tried those things. But then I was on what they call a natural high.”

The Cat said that there was mixed reactions from the dressing room before the event, with many people thinking that WCW fans wouldn’t react to James Brown. Of course, that proved to be very wrong, and the Cow Palace was “electrifying” according to Miller. “That was one of the best things they’ve ever done on a pay-per-view,” he said. Plus, backstage, everyone wanted to meet The Godfather of Soul as well.

James Brown is also the one responsible for The Cat’s memorable cape and red shoes look from a while back. Miller loved watching Brown perform with his cape, and had one of his own made up. “All of the things I do, WCW has never written any of that stuff for me,” he said. “They really haven’t stopped me from doing it. They just gave me, ‘Go out there and be The Cat.'”

In The Cat’s words, the “people got with it” and he had to come up with something else, something different.

“What can I bring to the ring that can entertain the fans?” he asked himself. “So I came up with the red shoes, these loaded red shoes. My excuse for wearing the red shoes was to dance. But we know, because I was a bad guy at the time and they hated me, instead of just using the shoes to dance, I’m going to use the shoes to cheat. People got into it.”

So did the other wrestlers. “Sting was one of the first ones to come to me and said, ‘Cat, where’d you come up with the red shoes?’ And I said, ‘I don’t know, just sitting at home thinking about it, and thinking what would entertain people.’ He said, ‘That red shoe gimmick, it’s good. It’s going to get over.’ It’s something that people have never seen in wrestling before.”

Besides James Brown, Miller had a few other role models for his wrestling character as well. One was Muhammed Ali, which easily explains Miller’s constant referral to himself as ‘The Greatest’, which Ali used to do as well.

But a young Ernest Miller was also a wrestling fan, and his favourites were Bullet Bob Armstrong, Ernie ‘Big Cat’ Ladd (“a great bad guy… I liked watching him on TV a lot, knowing the background that he came from”), Thunderbolt Patterson, and ‘The American Dream’ Dusty Rhodes. “All those guys had an impact on the kind of character that I am. Most of those guys had a lot of charisma, they didn’t do a lot of moves in the ring, but they had something about them. They had the charisma.”

He was hardly the pompous, self-confident Miller that fans see on TV. “Growing up, I was pretty quiet … kind of shy … I was a mama’s boy. I didn’t want to go out on the street and play with the roughnecks.” Organized sport, especially karate, allowed him to focus his energies and come out of his shell.

Miller went to Gordon High School in Decatur, GA, playing outside linebacker in football. Savannah State College in Georgia was next and he studied electrical engineering and continued playing football. He was an All-America linebacker and attended NFL training camps with the Atlanta Falcons and New England Patriots.

He even spent a brief time on the roster of the CFL’s Winnipeg Blue Bombers, but never played a down. “I was under contract to the Jets, and that was the year they had the strike. So the Winnipeg Blue Bombers needed a linebacker on their roster just for their Grey Cup [playoff] games. So that’s what we’re talking about. I spent maybe two weeks up there in Winnipeg because the strike was short.”

That was pretty well the end of his football career, and he went on to concentrate his energies on karate and bodybuilding.

Miller taught karate around Atlanta and went into many tournaments. He has been the ISKA Kick Boxing Champ, and Atomic Freestyle Karate Champ. Miller has also won the Rhode Island Invitational and Bluegrass Nationals, along with previously-mentioned trio of World Tournament Karate Championships.

But it was in 1992, while teaching karate at Joe Corley’s American Karate School in Atlanta and training for a couple of world title fights that he met Eric Bischoff, through Bischoff’s son Garrett. Miller didn’t know who Bischoff was, or that he was vice-president of World Championship Wrestling.

Garrett talked up his father’s own karate accomplishments to Miller, and eventually the two met when Bischoff asked to work out with the class. The future friends and co-workers sparred in front of the class, and both came away impressed with each other.

Bischoff pitched pro wrestling to Miller, but the call of karate was too great. Miller dreamed of being world karate champion, and he felt that he owed an obligation to the children he was teaching.

“Eric Bischoff came to me and said, ‘You could do good in this business.’ And I said no for three years because, I wasn’t making a hell of a lot of money, but I had about eight kids who were close to their black belts, and the only thing they wanted was to be a black belt. But these kids just happened to be real good in karate and fighting, so I said I was not going to walk out on them before they get their black belts,” Miller said.

Later, while working out at a gym in Atlanta, he began talking to WCW stars Booker T and Stevie Ray of Harlem Heat. From the two brothers, he learned about Bischoff’s role in WCW and what he could accomplish in pro wrestling, including the financial benefits.

So in 1996, the 6-foot-2, 235-pound Miller finally began training for wrestling at the WCW Power Plant. He made his TV debut in May 1997 by coming out from the crowd to save Glacier from an attack by Mortis (Kanyon), Wrath and James Vandenberg at Slamboree ’97 in Charlotte, N.C.

Looking back at his influences today, Miller can truly appreciate the lives of the likes of James Brown or Muhammad Ali. He’s a celebrity now too, and it’s a life full of surprises.

“[We] are celebrities to superstars,” he said. “You see guys that you look up to, like professional athletes, Shaq (Shaquille O’Neal) and these guys, entertaining Hollywood superstars. When they see us, they’re like ‘Wow! Cat how you doing?'”

Recent meetings have included Kevin Garnett of the Minnesota Timberwolves, boxing greats Joe Frazier and Muhammad Ali, and Boyz II Men. “Those guys, they acted like I was the biggest star in the whole building.