Guido Maritato is probably not known to many fans outside of ECW. As a matter of fact, even to ECW fans, the road the Italian-American traveled to get into professional wrestling might be a foreign one. After all, he did have a life before breaking into the business in the mid-’90s. 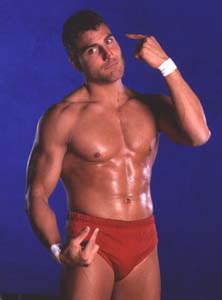 “I don’t know if you knew this, but before entering pro wrestling I wrestled in high school,” states the amiable grappler down the line from his New York state home. “I wrestled ever since sixth grade; sixth, seventh and eighth in middle school, and ninth, tenth, eleventh and twelfth. And from there I got involved with pro wrestling.”

Maritato’s style is that of a ground wrestler, with some high-spots thrown in, but it’s his incredible work rate that has made him a respected wrestler. According to him, it was only a matter of time, and it paid off, with the birth of the Full Blooded Italians, the current ECW tag-team champs, and a popular group in ECW for the past three years.

“That was all Paul E. I used wrestle a lot with Tommy Dreamer and Taz, and all them, in the ICW years ago . . . ECW got in contact with me, Tommy Dreamer and stuff, and I went to a meeting with them and that’s where I met Paul E. I worked a little bit as Damien Stone, and JT Smith was doing the FBI gimmick already. He was the original, he was the first Full Blooded Italian. He’s a black guy, and he was doing the gimmick alone. They didn’t bring me in to do the FBI gimmick. He was doing a gimmick where he got hit in the head, and he’s black, but he thought he was Italian, and he was a full blooded Italian. I started working as Damien Stone for a month, or two months, and Paul E. came up with idea of making me a Joe Pesci type of character, Little Guido, and my brother was going to be JT Smith. And that was the original Full Blooded Italians: Little Guido and JT Smith.”

Over the years, the FBI would include the like of Tommy Rich and Tracey Smothers, before eventually settling down with its current line-up of Maritato, Tony Mamaluke and Big Sal Graziano. The ECW tag-team champion states that in the beginning the FBI was formed more for comic relief, but has since changed into a more serious group of individuals, and group Heyman could push into the top of the tag-team division in ECW. Maritato says he welcomed the change.

“Before we would do matches, like when it was me and Tracy versus the Blue Meanie and Super Nova, we used to do dance-offs, and then cut each other off. Now, I try to put the persona on the people that I’m more of a technical wrestler. I just wanted to become more serious because I wanted people to believe in me, because in their mind it was like ‘He’s a good wrestler, but … He’s a good wrestler, but …’ And I want to get that ‘but’ out of their minds. And Paul wanted us to become more serious too.”

The more serious attitude has paid off, in what Maritato says is one of his ECW highlights — winning of the tag team straps.

“Winning the tag-team titles on August 25 (2000), that was a nice highlight. Another highlight when I was tag team champions with Tracey Smothers back in 1997, we beat New Jack and Kronus, with a little help from the Dudley Boyz. I’ve had so many matches, but a couple of highlights are a couple versus Tajiri, and up in Poughkeepsie, I think it was Hardcore Heaven, that was good highlight. And I had a couple of good ones with Super Crazzy.”

All those good times may be in the past, however. Not that Maritato won’t be making memories for himself, and the fans, but without a current TV deal, many will be left in the dark concerning ECW, at least until something else can be ironed out. This interview was conducted right before TNN pulled the plug on ECW, but at the time Maritato said he wasn’t worried.

“I believe Paul Heyman will never let ECW die, as many times everyone thinks we’re going down, he comes up with something else. Everyone thought that was our last show on TNN, and all of sudden, next thing you know, we’re still on TNN. Paul’s a very smart business man, he knows what’s going on. I liked TNN. As far as advertising us and pushing us, I feel they used us a little bit, for the WWF. I believe, and this is not a fact and I don’t know, but I think they were using us as more of a test, and they always wanted the WWF. But that’s okay because I believe that Paul Heyman will come up with another TV deal, whether it’s FOX, USA, whether it’s anyone, Paul Heyman will come up with something to keep this company going. I have faith in him, and he’s proven it time and time again since 1995.”

One way for ECW to stay alive in the minds of many will be a spate of monthly pay-per-views, which shocked many when they were announced in the summer. While those plans were launched before the TV deal was cancelled, a lot of critics didn’t think the company could pull it off even when they had a deal. Maritato disagrees, and thinks it can only benefit ECW.

“I think that’s great. I think that’s good for our company, and I think it’s a credit to all the wrestlers that Paul believes that we can go out there and put on a live PPV on every month. It’s very hard to go out there and do it like the WWF does it, but they’ve been around a lot longer. To do taped shows, and to do live shows, are two totally different things. And Paul has trust in us that we can pull off a PPV every month. Maybe two years ago we couldn’t do that. But our locker room is a hard-working locker room, and I think we can do it, and I think Paul has faith in us and that makes us want to drive more to show him that we can do it. As far as exposure it’s a lot better, and financially it’s a lot better.”