Ask most wrestlers why they get into the business and you’d get a variety of answers. Some do it because of family heritage. Some do it because athletic competition is their forte. Others because it’s a route to fame and fortune. For WCW superstar Booker T, it was matter of survival. A single father working at a storage company in Houston, Texas, Booker Huffman was looking to make a better life for himself and his young son. 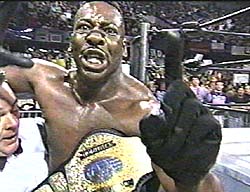 “I wouldn’t say it was hard raising my son. It was just about making a change and knowing what I HAD to do not what I WANTED to do. I am the youngest of eight kids and my mother was a single parent too. So, the only way I could look at it was, if my mother had EIGHT, man, what kind of father would I be if I can’t take time out to look over the ONE that I have?,” Booker told SLAM! Wrestling.

Working at American Mini-Storage paid the bills and Booker was happy with the job he was doing, sitting behind a computer each day and renting U-Haul trucks and storage room to customers. But, Booker wasn’t thinking of the present. It was his family’s future that worried him. Stevie Ray, Booker’s brother, presented him with an answer to his problems. Ray knew that former WWF wrestler — Ivan “Polish Power” Putski was opening a wrestling school as a part of his Western Wrestling Alliance federation. Ray suggested that he and Booker check it out.

“I’d never played sports or anything like that. I’d played as far as going over to the park playing football with the fellas and stuff like that. But, I was always an athletic person,” said Booker who focused on the arts in high school, choosing to be a drum major rather than a linebacker. Booker found great enjoyment and personal satisfaction in entertaining people and expressing himself in the arts. Termed by many as “athletic theatre”, pro-wrestling appealed to the performer in Booker. He wanted very much to at least give it a shot. The problem was that as a single parent, money was pretty tight. There wasn’t enough money to spend on costly wrestling lessons. 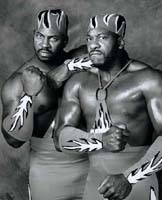 “It was $3,000 to go to the school. At the time, I was just working a regular job and raising my son as a single-parent. I was just trying to make everything work. It just so happened that the guy who I worked for at the American Mini-Storage wanted to see me succeed. So, he put the money up for me. He was a damn good boss,” said an appreciative Booker.

The wrestling ring oddly felt like home the first time Booker stepped into it. Though he can’t explain it, it was as if he had been meant to wrestle his whole life but just never knew it. Scott Casey, one of Putski’s trainers, took a personal interest in Booker. Casey saw his potential and began working closely with him not on suplexes or clotheslines but on what is referred to as “ring psychology”, the art of working a wrestling match properly so that the crowd becomes personally involved in the exhibition they are seeing. Booker’s background in drama and dance began paying off. He excelled quickly and eight weeks later, he wrestled his first match on television as a part of Putski’s Western Wrestling Alliance Live! program.

“I was G.I. Bro at the time. I was fresh on the scene and I started making waves within the first month or so I got into the business. It was crazy you know because I got a lot of feedback as far as magazines, people calling me, people wanting me to do their shows. I was like, ‘Man! This could turn into something.’ At the time, I really didn’t look at it as a career or anything like that,” he reflected.

The timing with the G.I. Bro character couldn’t have been better. The Gulf War was on and Sgt. Slaughter was on his way out. Booker thought that he could step into the spot Slaughter had left behind portraying a black American hero that children would find interesting. Having a son of his own and being a wrestling fan as a child, Booker understood the need to set a good example, to break down the barriers and portray a black hero in a sport that has promoted negative racial stereotypes throughout its history.

“That’s been my prime motivation and my prime objective since Day One of getting into the wrestling business. Growing up, I watched wrestling but it wasn’t something I had to go out and see on a regular basis due to the fact that every wrestler that I looked at in the sport who was black was always stereotyped in one way or another. They always could dance. They always had hard heads like a coconut. You know, something like that. I have worked to break that stereotype. That’s why when you see me come to a wrestling venue or an event, I am always going to be dressed better than anyone else because I don’t just represent myself, I represent a whole race of people who are watching these shows,” Booker explained.

Even in the early days of his career, Booker took his cues from great sports icons and great men he idolized like Jackie Robinson. Men who made a difference and changed ignorant attitudes. “Sooner or later, someone has to take a stand. Me, personally? I am doing whatever I can do to make it so that the guy after me who’s comes through won’t have to go out there and be a ‘Boogaloo Brown’. He can just be ‘Jim Brown’. He doesn’t have to go out there with grease on his hair so people could look at him like a stupid person.”

Booker’s plans with G.I. Bro were altered with one trip to Amarillo, Texas. Putski’s federation had folded. The promise of a hundred dollars to work an indie show drew Booker and Stevie Ray deep into Terry Funk’s neck of the woods. There they bumped into manager, promoter and some time wrestler, Skandar Akbar. Booker, as G.I. Bro, wrestled Stevie Ray (The Super Collider) and Akbar hired them on the spot for his Global Wrestling Federation (GWF) promotion in Dallas. Akbar sent the word out and wrestling legend “Hot Stuff” Eddie Gilbert, who was booking the territory at the time, started working on ideas for Booker and Stevie Ray as a new tag team.

“Gilbert wanted to show an intelligent black tag team on television and push them to the moon. That was his idea. That was his dream for us. What happened was he had the whole thing lined up for us and the day we came in for our tryout, he got fired. So, it kinda put us in the back again. So, the big angle turned into a tryout in just about one minute,” Booker laughed remembering the strange turn of events.

Like Akbar, the bookers liked what they saw and Stevie Ray and Booker T were transformed into The Ebony Experience. Fans warmed up to the team immediately. Used to seeing an old-style of mat wrestling, crowds were excited about the new approach the hard-hitting, high-flying, Huffman brothers brought to the federation. 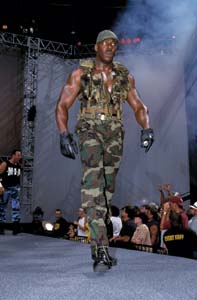 As the style changed so to did the type of crowd the GWF pulled in as soon as Booker T and Stevie Ray joined the locker room. According to Booker, there was a sudden turnaround in attendance. More black people started coming to the shows just to see The Ebony Experience. A standard draw of 120 to 200 people grew to 3,500 in the two years Booker and Stevie Ray were there. That accomplishment still stands as a milestone for Booker. It proved that he and his brother had drawing power, an important commodity in the wrestling business. Their efforts didn’t go unnoticed either. A phone call from Sid Vicious and the brothers were WCW bound. Sid was pursuing a front office job and thought that his acquisition of a strong tag team to take on The Nasty Boys and others would better his standing in the company.

“We didn’t owe Sid anything and he didn’t owe us anything. He just came out of the blue for us. He was like our angel in disguise,” said Booker. “We had never met him. We had never talked to him. He saw us on television and thought well of our work.”

As Harlem Heat, Booker T and Stevie Ray will go down as one of the greatest tag team combinations in WCW history with ten impressive reigns as World Tag Team Champions. Booker credits his brother with much of his success which is why the two have supported each other throughout their years in WCW when push came to shove with the bookers or management.

Recently, Booker and Stevie Ray tried to extend their support to close friend, Tony Norris. Once Ahmed Johnson in the World Wrestling Federation, Norris was let go from the company. The brothers and Norris have known each other for twelve years as Norris and Stevie Ray once worked as security guards together patrolling housing projects in Texas. Things didn’t quite work out as the brothers planned though. Fans weren’t receptive to the new version of Harlem Heat and neither were WCW’s bookers, Vince Russo and Eric Bischoff.

Booker has this assessment of the situation. “We were trying to give him (Norris) a shot to get back into the wrestling business after the big debacle in the WWF. He had a major chance there. He could have made a major run. He could’ve been a millionaire right now if he would’ve played his cards right. Things fell apart for him and my brother wanted to give him a chance and get him back into the business but it just didn’t work out. So, the best thing for somebody is if it isn’t working out is to leave for awhile and repackage them and bring them back differently.”

On the singles front, Booker has done very well gaining the respect of wrestling fans world-wide as a hard worker and a consummate performer. Booker has held WCW’s Television Title on six occasions defeating the likes of Disco Inferno, Rick Martel, Fit Finlay, Scott Steiner and Chris Benoit. Booker’s series of outstanding matches with Benoit are his personal favourites so far.

“He is one of the greatest workers who’ve ever been in the business. I consider him in the fop five wrestlers in the world right now,” Booker spoke of the current WWF Intercontinental Champion.

Talk to wrestling fans and you’d be hard pressed to find someone who doesn’t think the same of Booker T as he does of Benoit. Many would go even as far as to say that Booker is an underused talent in WCW. Someone they should be pushing hard and staking their future on. Fans may be surprised to learn that Booker is somewhat disappointed but not bitter about what’s gone on in the past. He’s proud that he has made it on his own and with the support of his fans.

“I’ve have made it for myself. The people and my legs carried me to everything that I have gotten right now and I appreciate that much more than anything a friggin’ push they could’ve given me,” said Booker.